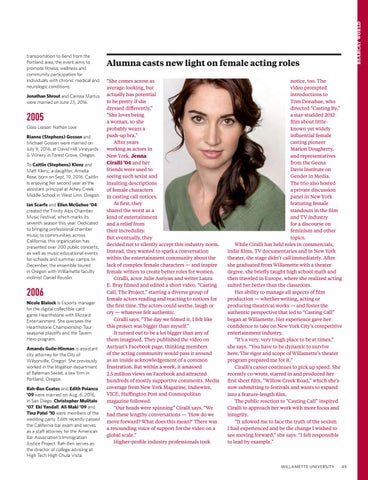 Jonathan Shrout and Carissa Martus were married on June 23, 2016.

2006 Nicole Blalock is Esports manager for the digital collectible card game Hearthstone with Blizzard Entertainment. She oversees the Hearthstone Championship Tour seasonal playoffs and the Tavern Hero program. Amanda Guile-Hinman is assistant city attorney for the City of Wilsonville, Oregon. She previously worked in the litigation department of Bateman Seidel, a law firm in Portland, Oregon. Rah-Ben Coates and Edith Polanco ’09 were married on Aug. 6, 2016, in San Diego. Christopher Mulitalo ’07, Eki Yandall, Ali Maki ’09 and Tina Patel ’10 were members of the wedding party. Edith recently passed the California bar exam and serves as a staff attorney for the American Bar Association’s Immigration Justice Project. Rah-Ben serves as the director of college advising at High Tech High Chula Vista.

transportation to Bend from the Portland area, the event aims to promote fitness, wellness and community participation for individuals with chronic medical and neurologic conditions.

Alumna casts new light on female acting roles “She comes across as average-looking, but actually has potential to be pretty if she dressed differently.” “She loves being a woman, so she probably wears a push-up bra.” After years working as actors in New York, Jenna Ciralli ’04 and her friends were used to seeing such sexist and insulting descriptions of female characters in casting call notices. At first, they shared the worst as a kind of entertainment and a relief from their incredulity. But eventually, they decided not to silently accept this industry norm. Instead, they wanted to spark a conversation within the entertainment community about the lack of complex female characters — and inspire female writers to create better roles for women. Ciralli, actor Julie Asriyan and writer Laura E. Bray filmed and edited a short video, “Casting Call, The Project,” starring a diverse group of female actors reading and reacting to notices for the first time. The actors could seethe, laugh or cry — whatever felt authentic. Ciralli says, “The day we filmed it, I felt like this project was bigger than myself.” It turned out to be a lot bigger than any of them imagined. They published the video on Asriyan’s Facebook page, thinking members of the acting community would pass it around as an inside acknowledgement of a common frustration. But within a week, it amassed 2.5 million views on Facebook and attracted hundreds of mostly supportive comments. Media coverage from New York Magazine, Indiewire, VICE, Huffington Post and Cosmopolitan magazine followed. “Our heads were spinning” Ciralli says. “We had these lengthy conversations — ‘How do we move forward? What does this mean?’ There was a resounding voice of support for the video on a global scale.” Higher-profile industry professionals took

notice, too. The video prompted introductions to Tom Donahue, who directed “Casting By,” a star-studded 2012 film about littleknown yet widely influential female casting pioneer Marion Dougherty, and representatives from the Geena Davis Institute on Gender in Media. The trio also hosted a private discussion panel in New York featuring female standouts in the film and TV industry for a discourse on feminism and other topics. While Ciralli has held roles in commercials, indie films, TV documentaries and in New York theater, the stage didn’t call immediately. After she graduated from Willamette with a theater degree, she briefly taught high school math and then traveled in Europe, where she realized acting suited her better than the classroom. Her ability to manage all aspects of film production — whether writing, acting or producing theatrical works — and foster the authentic perspective that led to “Casting Call” began at Willamette. Her experience gave her confidence to take on New York City’s competitive entertainment industry. “It’s a very, very tough place to be at times,” she says. “You have to be dynamic to survive here. The rigor and scope of Willamette’s theater program prepared me for it.” Ciralli’s career continues to pick up speed. She recently co-wrote, starred in and produced her first short film, “Willow Creek Road,” which she’s now submitting to festivals and wants to expand into a feature-length film. The public reaction to “Casting Call” inspired Ciralli to approach her work with more focus and integrity. “It allowed me to face the truth of the sexism I had experienced and be the change I wished to see moving forward,” she says. “I felt responsible to lead by example.”

The magazine of Willamette University

The magazine of Willamette University