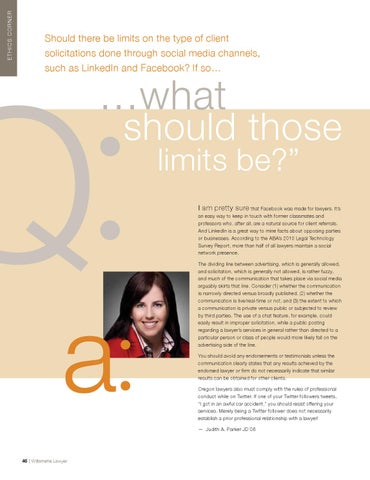 Should there be limits on the type of client solicitations done through social media channels, such as LinkedIn and Facebook? If so…

should those limits be?”

I am pretty sure that Facebook was made for lawyers. It’s an easy way to keep in touch with former classmates and professors who, after all, are a natural source for client referrals. And LinkedIn is a great way to mine facts about opposing parties or businesses. According to the ABA’s 2010 Legal Technology Survey Report, more than half of all lawyers maintain a social network presence. The dividing line between advertising, which is generally allowed, and solicitation, which is generally not allowed, is rather fuzzy, and much of the communication that takes place via social media arguably skirts that line. Consider (1) whether the communication is narrowly directed versus broadly published, (2) whether the communication is live/real-time or not, and (3) the extent to which a communication is private versus public or subjected to review by third parties. The use of a chat feature, for example, could easily result in improper solicitation, while a public posting regarding a lawyer’s services in general rather than directed to a particular person or class of people would more likely fall on the advertising side of the line. You should avoid any endorsements or testimonials unless the communication clearly states that any results achieved by the endorsed lawyer or firm do not necessarily indicate that similar results can be obtained for other clients. Oregon lawyers also must comply with the rules of professional conduct while on Twitter. If one of your Twitter followers tweets, “I got in an awful car accident,” you should resist offering your services. Merely being a Twitter follower does not necessarily establish a prior professional relationship with a lawyer! — Judith A. Parker JD’06

The new normal: Even in a bad economy, Willamette law graduates are managing to find jobs. Patience, persistence and flexibility are key (and, of course, an optimistic attitude). 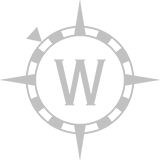