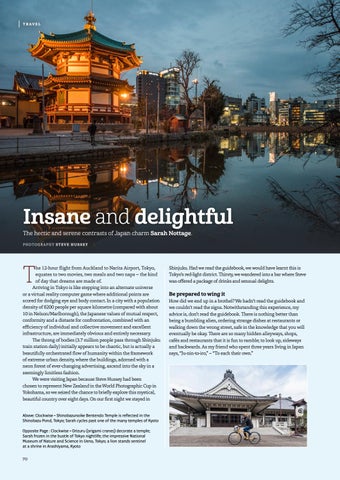 he 12-hour flight from Auckland to Narita Airport, Tokyo, equates to two movies, two meals and two naps – the kind of day that dreams are made of. Arriving in Tokyo is like stepping into an alternate universe or a virtual reality computer game where additional points are scored for dodging eye and body contact. In a city with a population density of 6200 people per square kilometre (compared with about 10 in Nelson/Marlborough), the Japanese values of mutual respect, conformity and a distaste for confrontation, combined with an efficiency of individual and collective movement and excellent infrastructure, are immediately obvious and entirely necessary. The throng of bodies (3.7 million people pass through Shinjuku train station daily) initially appears to be chaotic, but is actually a beautifully orchestrated flow of humanity within the framework of extreme urban density, where the buildings, adorned with a neon forest of ever-changing advertising, ascend into the sky in a seemingly limitless fashion. We were visiting Japan because Steve Hussey had been chosen to represent New Zealand in the World Photographic Cup in Yokohama, so we seized the chance to briefly explore this mystical, beautiful country over eight days. On our first night we stayed in Above: Clockwise - Shinobazunoike Bentendo Temple is reflected in the Shinobazu Pond, Tokyo; Sarah cycles past one of the many temples of Kyoto Opposite Page : Clockwise – Orizuru (origami cranes) decorate a temple; Sarah frozen in the bustle of Tokyo nightlife; the impressive National Museum of Nature and Science in Ueno, Tokyo; a lion stands sentinel at a shrine in Arashiyama, Kyoto 70

Shinjuku. Had we read the guidebook, we would have learnt this is Tokyo’s red-light district. Thirsty, we wandered into a bar where Steve was offered a package of drinks and sensual delights.

Be prepared to wing it How did we end up in a brothel? We hadn’t read the guidebook and we couldn’t read the signs. Notwithstanding this experience, my advice is, don’t read the guidebook. There is nothing better than being a bumbling alien, ordering strange dishes at restaurants or walking down the wrong street, safe in the knowledge that you will eventually be okay. There are so many hidden alleyways, shops, cafés and restaurants that it is fun to ramble; to look up, sideways and backwards. As my friend who spent three years living in Japan says, “Ju-nin-to-iro,” – “To each their own.”