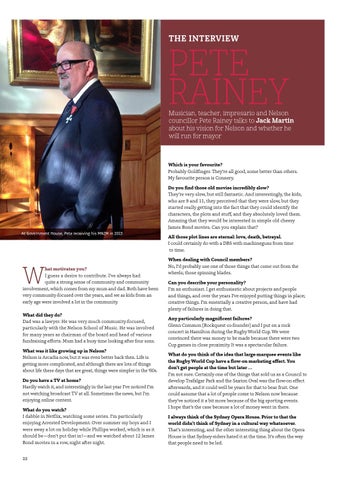 Musician, teacher, impresario and Nelson councillor Pete Rainey talks to Jack Martin about his vision for Nelson and whether he will run for mayor

Which is your favourite? Probably Goldfinger. They’re all good, some better than others. My favourite person is Connery. Do you find those old movies incredibly slow? They’re very slow, but still fantastic. And interestingly, the kids, who are 9 and 11, they perceived that they were slow, but they started really getting into the fact that they could identify the characters, the plots and stuff, and they absolutely loved them. Amazing that they would be interested in simple old cheesy James Bond movies. Can you explain that? At Government House, Pete receiving his MNZM in 2013

hat motivates you? I guess a desire to contribute. I’ve always had quite a strong sense of community and community involvement, which comes from my mum and dad. Both have been very community-focused over the years, and we as kids from an early age were involved a lot in the community. What did they do? Dad was a lawyer. He was very much community-focused, particularly with the Nelson School of Music. He was involved for many years as chairman of the board and head of various fundraising efforts. Mum had a busy time looking after four sons. What was it like growing up in Nelson? Nelson is Arcadia now, but it was even better back then. Life is getting more complicated, and although there are lots of things about life these days that are great, things were simpler in the ‘60s. Do you have a TV at home? Hardly watch it, and interestingly in the last year I’ve noticed I’m not watching broadcast TV at all. Sometimes the news, but I’m enjoying online content. What do you watch? I dabble in Netflix, watching some series. I’m particularly enjoying Arrested Development. Over summer my boys and I were away a lot on holiday while Phillipa worked, which is as it should be — don’t put that in! — and we watched about 12 James Bond movies in a row, night after night. 22

All those plot lines are eternal: love, death, betrayal. I could certainly do with a DB5 with machineguns from time to time. When dealing with Council members? No, I’d probably use one of those things that come out from the wheels; those spinning blades. Can you describe your personality? I’m an enthusiast. I get enthusiastic about projects and people and things, and over the years I’ve enjoyed putting things in place; creative things. I’m essentially a creative person, and have had plenty of failures in doing that. Any particularly magnificent failures? Glenn Common [Rockquest co-founder] and I put on a rock concert in Hamilton during the Rugby World Cup. We were convinced there was money to be made because there were two Cup games in close proximity. It was a spectacular failure. What do you think of the idea that large-marquee events like the Rugby World Cup have a flow-on marketing effect. You don’t get people at the time but later … I’m not sure. Certainly one of the things that sold us as a Council to develop Trafalgar Park and the Saxton Oval was the flow-on effect afterwards, and it could well be years for that to bear fruit. One could assume that a lot of people come to Nelson now because they’ve noticed it a bit more because of the big sporting events. I hope that’s the case because a lot of money went in there. I always think of the Sydney Opera House. Prior to that the world didn’t think of Sydney in a cultural way whatsoever. That’s interesting, and the other interesting thing about the Opera House is that Sydney-siders hated it at the time. It’s often the way that people need to be led.