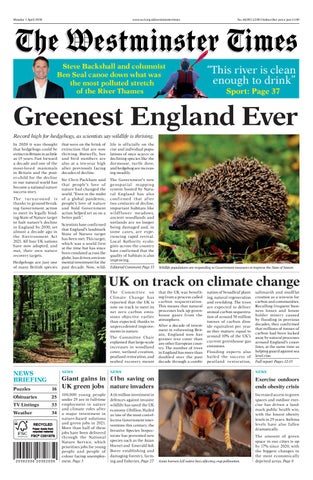 “This river is clean enough to drink” Sport: Page 37

Greenest England Ever Record high for hedgehogs, as scientists say wildlife is thriving. In 2020 it was thought that hedgehogs could be extinct in Britain in as little as 15 years. Fast forward a decade and one of the most-loved mammals in Britain and the poster-child for the decline in our natural world has become a national nature success story. The t u r n a r ou nd i s thanks to ground-breaking Government action to meet its legally binding State of Nature target to halt nature’s decline in England by 2030, set almost a decade ago in the Environment Act 2021. All four UK nations have now adopted, and met, their own nature recovery targets. Hedgehogs are just one of many British species

that were on the brink of extinction that are now thriving. Butterfly, bee and bird numbers are also at a ten-year high after previously facing decades of decline.

life is officially on the rise and individual populations of once scarce or declining species like the dormouse, turtle dove, and hedgehog are increasing steadily.

The Government’s new ge o s p at i a l m appi n g system hosted by Natural England has also confirmed that after two centuries of decline, important habitats like wildflower meadows, ancient woodlands and wetlands are no longer being damaged and, in some cases, are experiencing rapid revival. Local Authority ecologists across the country have confirmed that the quality of habitats is also improving.

Scientists have confirmed that England’s landmark State of Nature target has been met. This target, which was a world first at the time but has since been emulated across the globe, has driven environmental investment for the past decade. Now, wild-

Wildlife populations are responding to Government measures to improve the State of Nature.

UK on track on climate change The C om m it t e e on Climate Cha nge ha s reported that the UK is now on track to meet its net zero carbon emissions objective earlier than expected, thanks to unprecedented improvements in nature. The Committee Chair explained that large-scale increases in woodland cover, wetland creation, peatland restoration, and seabed recovery meant

that the UK was benefiting from a process called carbon sequestration. This means that natural processes lock up greenhouse gases from the atmosphere. After a decade of investment in reforesting Britain, England now has greater tree cover than any other European country. The number of trees in England has more than doubled over the past decade through a combi-

nation of broadleaf planting, natural regeneration and rewilding. The trees are expected to deliver annual carbon sequestration of around 50 million tonnes of carbon dioxide equivalent per year as they mature, equal to around 10% of the UK’s current greenhouse gas emissions. Flooding experts also hailed the success of peatland restoration,

saltmarsh and mudflat creation as a win-win for carbon and communities. Recalling frequent business losses and house holder misery caused by flooding in previous decades, they confirmed that millions of tonnes of carbon had been locked away by natural processes around England’s coastlines, at the same time as helping guard against sea level rise. Full report: Pages 12-13 NEWS

100,000 young people under 25 are in full-time employment in nature and climate roles after a major investment in nature-based solutions and green jobs in 2021. More than half of these jobs have been delivered through the National Nature Service, which prioritises jobs for young people and people of colour facing unemployment. Page 3

A £6 million investment in defences against invasive wildlife has saved the UK economy £1billion. Hailed as ‘one of the most cost-effective Government interventions this century, the Invasive Species Inspectorate has prevented new species such as the Asian Hornet and Emerald Ash Borer establishing and damaging forestry, farming and fisheries. Page 27

The amount of green space in our cities is up by 17% since 2020, with the biggest changes in the most economically deprived areas. Page 8

The Office for Environmental Protection is planning a celebration to mark its tenth year, which is expected to coincide with the completion of its last open enforcement case.

There have been weeks of speculation after Leamington Spa residents first spotted “the Leamington Leopard” outside the Organic Supermarket on the High Street.

The OEP was established u nder t he Env i ron ment Act in 2021, with a mandate to ensure that public authorities comply with environmental law. Since then, it has advised the Government on an effective path to achieving the 2030 State of Nature target, including helping to set and achieve a binding milestone for 2026. The OEP’s first ten years have not always been easy. The watchdog came under fire on a number of occasions for taking a strong line on unlawful government decisions, but the Board benefited from its independence from central government and successfully pursued every case. The process of Environmental Review, which can now be heard in the Upper Tribunal, in some cases led to quashing orders and multi-million pound fines for unlawful pollution and development. The Chair of the OEP said that she celebrated the expected closure of cases, but would remain vigilant. She expected that the OEP would go on to advise future governments in creating an ever more prosperous green economy and natural world.

Today, the Local Authority ecologist, Kat Wright, said “It was just a lynx”.

Butterflies, bees and other insects are essential to pollinate crops for our farms, with populations rising after decades of decline.

Lynx are now common in the area after successful reintroduction in 2025. Nature Lynx is a local wildlife tourism business associated with Leamington’s successful rewilding project. Its spokesperson said that it was unusual for the cats to be seen so far in the town, but the individual had probably been attracted by the quality produce on offer on market day.

Farmers buzzing as produce, profits and pollinators soar The UK is expected to produce three quarters of the food consumed in this country for the first time in more than a century, as farmers predict a record-breaking crop. Martin Lines, head of the Nature-Friendly Farming Network, put the success down to a combination of recovering soils and thriving pollinator populations.

“The country is reaping the rewards from the Government’s decision to double investment in sustainable land management. Now all of our agricultural landscape, which is 70% of the UK, is supporting nature, delivering clean water and air, and farmers are competing to see who can be the most carbon positive. Farms are more sustain-

able and profitable than ever before, producing nutritious nature-friendly food that’s accessible to everyone.” At the same time, exports of organic produce from the UK to other countries have also more than doubled. The UK is now the biggest exporter of organic produce globally, providing a boost

i n employ ment a nd profits for the farming sector. Organic growers said that the adoption of rigorous whole farm standards had made UK sustainable produce pa r t icula rly ma rketable, at the same time as contributing to environmental improvement. The Market Towns Initiative confirmed that the

Local Food Chain Plan had helped ensure that high UK environmental production standards were supported by fair and efficient routes to market for farmers. This cut down waste and ensured that farmers and growers enjoyed a greater share of the profits and were not undercut by imports grown to lower environmental standards.

Tide turned for whales, International Surfing dolphins and seabirds HQ moves to Newquay by latest fishing rules from New South Wales Su s t a i n able f i s h i n g measures brought in as part of a post COVID-19 blue recovery package in 2021 have slashed the number of fishing-related deaths of mammals and birds in the UK. Government action, including a marine spatial plan and remote monitoring cameras across the entire UK fishing fleet have allowed populations of some of our most wellloved marine species to thrive again. Baby orca have been spotted in the

UK’s west coast pod for the first time in almost 30 years and bottle-nosed dolphin and kittiwake numbers are soaring. A highly respected RSPB ma r i ne ca mpa ig ner, known as the Codfather, said: “The Government’s commitment to, and investment in, sustainable fishing since 2021 has brought a wave of change for species that were on the brink of extinction.” Energy experts said that the success was down

to the Government’s reform of marine spatial planning rules, which had allowed the UK to extend its international lead in offshore clean energy generation, while also creating extensive Highly Protected Marine Areas to allow nature to recover. Fishing leaders agreed that the project had been a success, allowing important fish stocks to be replenished, while bringing new business and ecotourism to coastal communities.

Sparkling Cornish seas and a thriving eco-leisure scene open a new chapter in history of the sport, as the HQ of the International Surfing Association announced a move to England.

Surfers said that the seas around England had been at Point Break in 2020, when the UK was failing 11 out of 15 indicators of good marine health. Industrialisation of the sea and over-fishing

had threatened a “double up wave” of damage. But experts said that the celebrated Environment Act 2021 had driven successful ocean recovery action so quickly that now English waters were the envy of the world.

Want to help headlines like this come true? Please support a target to halt nature’s decline by 2030 in the Environment Bill We must improve the State of Nature. We’d be Fools not to.

The Thames they are a-changin’

The River Thames was once declared ‘ biologically dead’ but has come back to life with species like the Starry Smoothhound shark.

“Jaws” were dropping on the Thames Estuary Wildlife Observatory Boat this week, as viewers were treated to sightings of dozens of Tope and Starry Smoothhound sharks, which breed in the outer Thames Estuary. Once declared biologically

dead, the whole Thames is now turning into an international attraction as a haven for wildlife. Experts welcomed wider success in restoring England’s rivers, once considered the most polluted in the world. Env ironment Agency

action resulted in the UK topping the water quality league tables in Europe after a decade of funding increases for the enforcer have reduced pollution levels in our rivers to pre-1960s levels. The Wild Sw immers Club reported that more

people than ever before were getting into nature through the new Blue Cor r idor s I n it iat ive, bringing blue access to wild riverbanks into the heart of major metropolitan areas. The Birmingham Beaver Fanclub has hit 100,000 members. One

Birmingham schoolgirl told this newspaper that she remembered thinking beavers were fictional as a child, but she now sees them regularly. She had not seen a riparian trolley for some time. Sir Steve Backshall, UN Adventure Ambassador,

said that “bold political action a decade ago had opened up our waterways and helped save wildlife.” He takes our sports columnist on a canoe trip down what was the most polluted stretch of the River Thames, where the water is now clean enough to drink.

The State of Nature Campaign is supported by 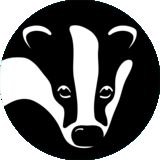