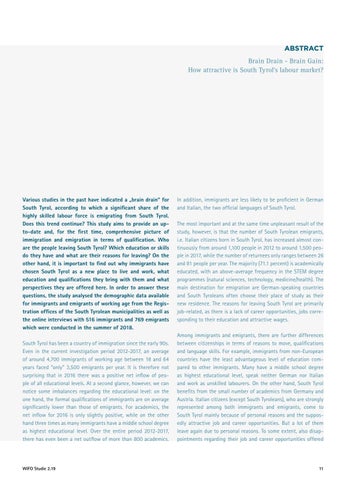 Various studies in the past have indicated a „brain drain“ for South Tyrol, according to which a significant share of the highly skilled labour force is emigrating from South Tyrol. Does this trend continue? This study aims to provide an upto-date and, for the first time, comprehensive picture of immigration and emigration in terms of qualification. Who are the people leaving South Tyrol? Which education or skills do they have and what are their reasons for leaving? On the other hand, it is important to find out why immigrants have chosen South Tyrol as a new place to live and work, what education and qualifications they bring with them and what perspectives they are offered here. In order to answer these questions, the study analysed the demographic data available for immigrants and emigrants of working age from the Registration offices of the South Tyrolean municipalities as well as the online interviews with 516 immigrants and 769 emigrants which were conducted in the summer of 2018. South Tyrol has been a country of immigration since the early 90s. Even in the current investigation period 2012-2017, an average of around 4,700 immigrants of working age between 18 and 64 years faced “only” 3,500 emigrants per year. It is therefore not surprising that in 2016 there was a positive net inflow of people of all educational levels. At a second glance, however, we can notice some imbalances regarding the educational level: on the one hand, the formal qualifications of immigrants are on average significantly lower than those of emigrants. For academics, the net inflow for 2016 is only slightly positive, while on the other hand three times as many immigrants have a middle school degree as highest educational level. Over the entire period 2012-2017, there has even been a net outflow of more than 800 academics.

In addition, immigrants are less likely to be proficient in German and Italian, the two official languages of South Tyrol. The most important and at the same time unpleasant result of the study, however, is that the number of South Tyrolean emigrants, i.e. Italian citizens born in South Tyrol, has increased almost continuously from around 1,100 people in 2012 to around 1,500 people in 2017, while the number of returnees only ranges between 26 and 81 people per year. The majority (71.1 percent) is academically educated, with an above-average frequency in the STEM degree programmes (natural sciences, technology, medicine/health). The main destination for emigration are German-speaking countries and South Tyroleans often choose their place of study as their new residence. The reasons for leaving South Tyrol are primarily job-related, as there is a lack of career opportunities, jobs corresponding to their education and attractive wages. Among immigrants and emigrants, there are further differences between citizenships in terms of reasons to move, qualifications and language skills. For example, immigrants from non-European countries have the least advantageous level of education compared to other immigrants. Many have a middle school degree as highest educational level, speak neither German nor Italian and work as unskilled labourers. On the other hand, South Tyrol benefits from the small number of academics from Germany and Austria. Italian citizens (except South Tyroleans), who are strongly represented among both immigrants and emigrants, come to South Tyrol mainly because of personal reasons and the supposedly attractive job and career opportunities. But a lot of them leave again due to personal reasons. To some extent, also disappointments regarding their job and career opportunities offered

in South Tyrol have an impact. Every third immigrant comes from other European countries, especially Albania, Kosovo, Romania and Slovakia. Many of them have a high school degree and a good knowledge of German or Italian. Summing up, the study gives an ambivalent picture of the perception of South Tyrol as a good place to work and live. On the one hand, South Tyrol scores, from the point of view of immigrants and emigrants, with an overall high quality of life, various sports and leisure facilities and attractive public services. On the other hand, there are weaknesses in relation to the residence (lack of available housing, high cost of living) and especially in relation to the labour market (lack of job and career opportunities and low wage levels). Therefore, representatives and stakeholders of the South Tyrolean economic and educational policy face the following challenges: Increasing the employability of immigrants &gt; Even though the emigration of South Tyroleans represents a great challenge, there are more people immigrating to South Tyrol each year than emigrating. However, immigrants have a comparatively low qualification. In case of professional and linguistic deficits additional qualification might be an immediate approach.

&gt; In any case, children of low-skilled immigrants must be properly integrated into South Tyrolâ&amp;#x20AC;&amp;#x2DC;s school system, with particular attention to language skills. This guarantees them better career prospects and full integration into the South Tyrolean society. Reducing emigration of South Tyroleans, promoting immigration of highly skilled workers &gt; Many South Tyroleans study abroad and stay abroad. It can be assumed that many students know little about the employment opportunities in South Tyrolâ&amp;#x20AC;&amp;#x2122;s companies. For this reason, local companies should make greater efforts to attract students during their studies, e.g. by offering attractive internships. &gt; Many South Tyroleans report the unattractive working conditions as the reason for their emigration. South Tyrolean companies must therefore face up even more to the needs of young, highly skilled workers. &gt; The decision to come or return to South Tyrol is not only influenced by labour market conditions. For example, the availability of (also temporary) housing opportunities at affordable rents would be desirable, as would other assistance (mentoring, job placement for partners) through a welcome centre for highly skilled people.