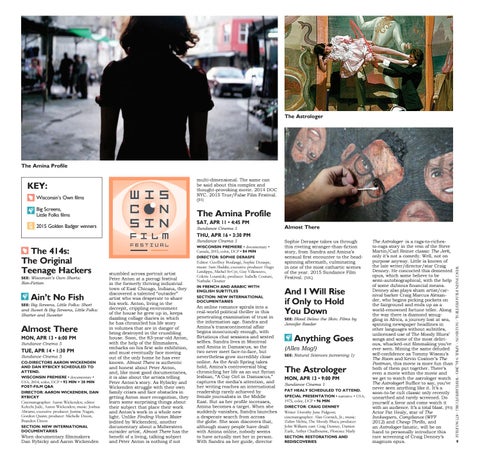 The Amina Profile multi-dimensional. he same can be said about this complex and thought-provoking movie. 01 O . 01 rue False Film Festival.

stumbled across portrait artist eter nton at a pierogi festival in the formerly thriving industrial town of ast hicago, ndiana, they discovered a talented outsider artist who was desperate to share his work. nton, living in the decrepit, crippling environment of the house he grew up in, keeps da ling collage diaries in which he has chronicled his life story in volumes that are in danger of being destroyed in the crumbling house. Soon, the -year-old nton, with the help of the ﬁlmmakers, embarks on his ﬁrst solo exhibition, and must eventually face moving out of the only home he has ever known. Almost There is authentic and honest about eter nton, and, like most good documentaries, it is also about the artists telling eter nton’s story. s ybicky and Wickenden struggle with their own family crises and face obstacles in getting nton more recognition, they learn some surprising things about their sub ect that place their work and nton’s work in a whole new light. nlike Finding Vivian Maier edited by Wickenden , another documentary about a idwestern outsider artist, Almost There has the beneﬁt of a living, talking sub ect and eterA Pnton R I L 9is- 1nothing 6 , 2 0 1 5if not

n online romance spirals into a real-world political thriller in this penetrating examination of trust in the information age. Sandra and mina’s transcontinental affair begins innocuously enough, with ﬂirtatious chat sessions and sexted selﬁes. Sandra lives in ontreal and mina in amascus, so the two never meet face-to-face, but nevertheless grow incredibly close online. s the rab Spring takes hold, mina’s controversial blog chronicling her life as an out Syrian lesbian, ay irl in amascus, captures the media’s attention, and her writing reaches an international readership rarely achieved by female ournalists in the iddle ast. ut as her proﬁle increases, mina becomes a target. When she suddenly vanishes, Sandra launches a desperate search from across the globe. She soon discovers that, although many people have dealt with mina online, nobody seems to have actually met her in person. With Sandra as her guide, director

Sophie eraspe takes us through this riveting stranger-than-ﬁction story, from Sandra and mina’s sensual ﬁrst encounter to the headspinning aftermath, culminating in one of the most cathartic scenes of the year. 01 Sundance Film Festival. (MK)

And I Will Rise if Only to Hold You Down

SEE: Blood Below the Skin: Films by

The Astrologer is a rags-to-richesto-rags story in the vein of the Steve artin arl einer classic The Jerk, only it’s not a comedy. Well, not on purpose anyway. ittle is known of the late writer director star raig enney. He concocted this demented opus, which some believe to be semi-autobiographical, with the help of some dubious ﬁnancial means. enney also plays sham artist carnival barker raig arcus lexander, who begins picking pockets on the fairground and ends up as a world-renowned fortune teller. long the way there is diamond smuggling in frica, a ourney lost at sea, spinning newspaper headlines in other languages without subtitles, unlicensed use of he oody lues’ songs and some of the most delirious, whacked-out ﬁlmmaking you’ve ever seen. ining the same deluded self-conﬁdence as ommy Wiseau’s The Room and evin ostner’s The Postman, this movie is more fun than both of them put together. here’s even a movie within the movie and we get to watch the astrologer watch The Astrologer Sufﬁce to say, you’ve never seen anything like it. t’s a soon-to-be cult classic only recently unearthed and rarely screened. o yourself a favor and come watch it with an audience. t’s a total blast. (PH) ctor at Healy, star of The Innkeepers, Compliance WFF 01 and Cheap Thrills, and an Astrologer fanatic, will be on hand to personally introduce this rare screening of raig enney’s 9 magnum opus.

The 414s: The Original Teenage Hackers