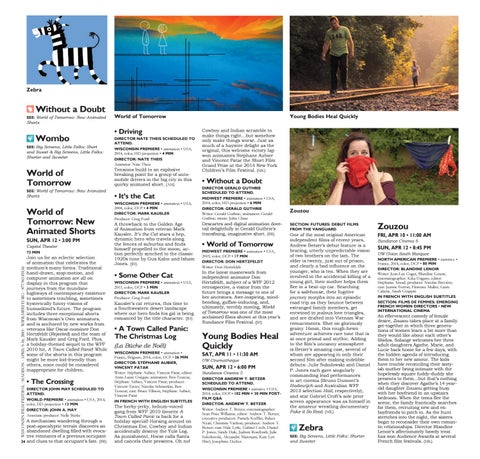 Tensions build to an explosive breaking point for a group of automobile drivers in the big city in this quirky animated short. (AM)

Join us for an eclectic selection of animation that celebrates the medium’s many forms. Traditional hand-drawn, stop-motion, and computer animation are all on display in this program that journeys from the mundane highways of contemporary existence to sometimes troubling, sometimes hysterically funny visions of humankind’s future. The program includes three exceptional shorts from Wisconsin’s Own animators, and is anchored by new works from veterans like Oscar-nominee Don Hertzfeldt (Rejected) and the team of Mark Kausler and Greg Ford. Plus, a holiday-themed sequel to the WFF 2010 hit, A Town Called Panic! While some of the shorts in this program might be more kid-friendly than others, none could be considered inappropriate for children.

A mechanism wandering through a post-apocalyptic terrain discovers an abandoned dwelling ﬁlled with evocative remnants of a previous occupant 34 and clues to that occupant’s fate. (BR)

A throwback to the Golden Age of Animation from veteran Mark Kausler, It’s the Cat stars a hep, dynamic hero who travels along the fences of suburbia and ﬁnds himself propelled to the moon, action perfectly synched to the classic 1920s tune by Gus Kahn and Isham Jones. (JH)

Kausler’s cat returns, this time to a Southwestern desert landscape where our hero ﬁnds his gal is being romanced by the title character. (JH)

The herky-jerky, helium-voiced gang from WFF 2010 favorite A Town Called Panic is back for a holiday special! Horsing around on Christmas Eve, Cowboy and Indian accidentally destroy the Yule Log. As punishment, Horse calls Santa and cancels their presents. Oh no!

In the latest masterwork from independent animator Don Hertzfeldt, subject of a WFF 2012 retrospective, a visitor from the future brings a message to one of her ancestors. Awe-inspiring, mindbending, guffaw-inducing, and, ultimately, terribly moving, World of Tomorrow was one of the most acclaimed ﬁlms shown at this year’s Sundance Film Festival. (JH)

One of the most original American independent ﬁlms of recent years, Andrew Betzer’s debut feature is a bracing, utterly unpredictable vision of two brothers on the lam. The older is twenty, just out of prison, and clearly a bad inﬂuence on the younger, who is ten. When they are involved in the accidental killing of a young girl, their mother helps them ﬂee in a beat-up car. Searching for a safehouse, their fugitive journey morphs into an episodic road trip as they bounce between estranged family members, get entwined in jealous love triangles, and are drafted into Vietnam War reenactments. Shot on gloriously grainy 16mm, this rough-hewn adventure achieves rare tone that is at once primal and mythic. Adding to the ﬁlm’s uncanny atmosphere is Betzer’s amazing cast, several of whom are appearing in only their second ﬁlm after making indelible debuts: Julie Sokolowski and Daniel P. Jones each gave singularly commanding lead performances in art cinema (Bruno Dumont’s Hadewijch and Australian WFF 2013 selection Hail, respectively), and star Gabriel Croft’s sole prior screen appearance was as himself in the amateur wrestling documentary Fake it So Real. (MK)

An effervescent comedy of female desire, Zouzou takes place at a family get-together in which three generations of women learn a bit more than they would like about each other’s libidos. Solange welcomes her three adult daughters Agathe, Marie, and Lucie back home for a few days, with the hidden agenda of introducing them to her new amour. The kids have trouble reconciling their sixtyish mother being intimate with the hopelessly square fuddy-duddy she presents to them…but that’s nothing when they discover Agathe’s 14 yearold daughter Zouzou getting busy with her boyfriend in an upstairs bedroom. When the teens ﬂee the scene, the family frantically searches for them, recruiting new and exboyfriends to pitch in. As the hunt stretches into the night, the sisters begin to reconsider their own romantic relationships. Director Blandine Lenoir’s affectionately bawdy treat has won Audience Awards at several French ﬁlm festivals. (MK)