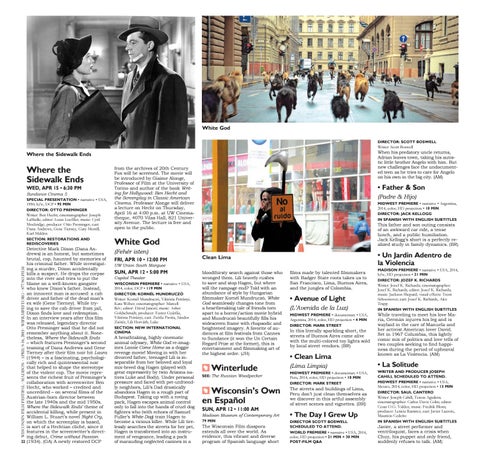 When his predatory uncle returns, Adrian leaves town, taking his autistic little brother Angelo with him. But new challenges face the undocumented teen as he tries to care for Angelo on his own in the big city. (AM)

Where the Sidewalk Ends

Detective Mark Dixon (Dana Andrews) is an honest, but sometimes brutal, cop, haunted by memories of his criminal father. While investigating a murder, Dixon accidentally kills a suspect. He drops the corpse into the river and tries to put the blame on a well-known gangster who knew Dixon’s father. Instead, an innocent man is accused: a cab driver and father of the dead man’s ex wife (Gene Tierney). While trying to save the cab driver from jail, ixon ﬁnds love and redemption. n an interview years after this ﬁlm was released, legendary director Otto Preminger said that he did not remember anything about it. Nonetheless, Where the Sidewalk Ends – which features Preminger’s second teaming of Dana Andrews and Gene ierney after their ﬁlm noir hit Laura (1944) – is a fascinating, psychologically rich and quintessential noir that helped to shape the stereotype of the violent cop. The movie represents the richest fruit of Preminger’s collaboration with screenwriter Ben Hecht, who worked – credited and uncredited on several ﬁlms of the Austrian-born director between the late 1940s and the mid 1950s. Where the Sidewalk Ends’ theme of accidental killing, while present in William L. Stuart’s novel Night Cry, on which the screenplay is based, is sort of a Hechtian cliché, since it features in the screenwriter’s directing debut, Crime without Passion 32 (1934). (GA) A newly restored DCP

from the archives of 20th Century Fox will be screened. The movie will be introduced by Giaime Alonge, Professor of Film at the University of Torino and author of the book Writing for Hollywood: Ben Hecht and the Screenplay in Classic American Cinema. Professor Alonge will deliver a lecture on Hecht on Thursday, April 16 at 4:00 p.m. at UW Cinematheque, 4070 Vilas Hall, 821 University Avenue. The lecture is free and open to the public.

This father and son outing consists of an awkward car ride, a tense lunch, and a public humiliation. ack ellogg’s short is a perfectly realized study in family dynamics. (BR)

bloodthirsty search against those who wronged them. Lili bravely rushes to save and stop Hagen, but where will the rampage end? Told with an abundance of style by Hungarian ﬁlmmaker orn l undruc , White God seamlessly changes tone from a heartbreaking tale of friends torn apart to a horror/action movie hybrid and undruc beautifully ﬁlls his widescreen frame with rhapsodic and heightened imagery. A favorite of audiences at ﬁlm festivals from annes to Sundance (it won the Un Certain Regard Prize at the former), this is entertainment and ﬁlmmaking art of the highest order. (JH)

A breathtaking, highly cinematic animal odyssey, White God re-imagines Lassie Come Home as a doggie revenge movie! Moving in with her divorced father, teenaged Lili is inseparable from her beloved and loyal mix-breed dog Hagen (played with great expressivity by twin Arizona natives Luke and Body). Under personal pressure and faced with pet-unfriendly neighbors, Lili’s Dad drastically abandons Hagen in a rough part of Budapest. Taking up with a roving pack, Hagen escapes animal control only to fall into the hands of cruel dog ﬁghters who with echoes of Samuel Fuller’s White Dog) train Hagen to become a vicious killer. While Lili tirelessly searches the streets for her pet, Hagen is transformed into an instrument of vengeance, leading a pack of marauding neglected canines in a

The Wisconsin Film diaspora extends all over the world. As evidence, this vibrant and diverse program of Spanish language short

ﬁlms made by talented ﬁlmmakers with Badger State roots takes us to San Francisco, Lima, Buenos Aires, and the jungles of Colombia.

In this literally sparkling short, the streets of Buenos Aires come alive with the multi-colored toy lights sold by local street vendors. (BR)

The streets and buildings of Lima, Peru don’t just clean themselves as we discover in this artful assembly of street scenes and vignettes. (BR)

While traveling to meet his love Maria, Germán injures his leg and is waylaid in the care of Manuela and her activist American lover David. Set in 1967 Columbia, this lightly comic mix of politics and love tells of two couples seeking to ﬁnd happiness during the period of upheaval known as La Violencia. (AM)

Javier, a street performer and ventriloquist, faces a crisis when Chuy, his puppet and only friend, suddenly refuses to talk. (AM)