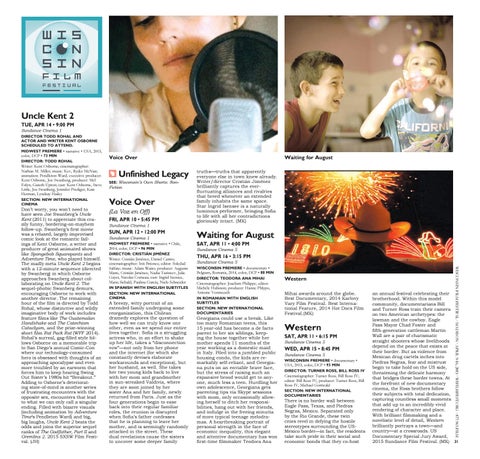 A breezy, witty portrait of an extended family undergoing some reorganization, this Chilean dramedy explores the question of how well we can truly know one other, even as we spend our entire lives together. Soﬁa is a struggling actress who, in an effort to shake up her life, takes a “disconnection vow”—not only from her phone and the internet (for which she constantly devises elaborate workarounds and exceptions), but her husband, as well. She takes her two young kids back to live with her mom and grandmother in sun-streaked Valdivia, where they are soon joined by her sister Ana and her family, newly returned from Paris. Just as the four generations begin to ease back into their regular familiar roles, the reunion is disrupted when Soﬁa’s father confesses that he is planning to leave her mother, and is seemingly randomly attacked in the street. These dual revelations cause the sisters to uncover some deeper family

Waiting for August truths—truths that apparently everyone else in town knew already. Writer/director Cristián Jiménez brilliantly captures the everﬂuctuating alliances and rivalries that breed whenever an extended family inhabits the same space. Star Ingrid Isensee is a naturally luminous performer, bringing Soﬁa to life with all her contradictions gloriously intact. (MK)

Georgiana could use a break. Like too many Romanian teens, this 15 year-old has become a de facto parent to her six siblings, keeping the house together while her mother spends 11 months of the year working as a domestic maid in Italy. Piled into a jumbled public housing condo, the kids are remarkably self-reliant, and Georgiana puts on an enviable brave face, but the stress of raising such an expansive brood would get to anyone, much less a teen. Hurdling her own adolescence, Georgiana gets parenting tips via Skype sessions with mom, only occasionally allowing herself to ditch her responsibilities, hang out with her friends, and indulge in the freeing minutia of more typical teenage melodramas. A heartbreaking portrait of personal strength in the face of economic inequality, this elegant and attentive documentary has won ﬁrst-time ﬁlmmaker eodora na

There is no border wall between Eagle Pass, Texas, and Piedras Negras, Mexico. Separated only by the Rio Grande, these twin cities revel in defying the hostile stereotypes surrounding the USMexico border—in fact, the residents take such pride in their social and economic bonds that they co-host

Don’t worry, you won’t need to have seen Joe Swanberg’s Uncle Kent (2011) to appreciate this crazily funny, bordering-on-mayhem follow-up. Swanberg’s ﬁrst movie was a relaxed, largely improvised comic look at the romantic failings of Kent Osborne, a writer and producer of great animated shows like Spongebob Squarepants and Adventure Time, who played himself. The madly meta Uncle Kent 2 begins with a 12-minute sequence (directed by Swanberg) in which Osborne approaches Swanberg about collaborating on Uncle Kent 2. The sequel-phobic Swanberg demurs, encouraging Osborne to work with another director. The remaining hour of the ﬁlm is directed by odd Rohal, whose distinctive and wildly imaginative body of work includes feature ﬁlms like The Guatemalan Handshake and The Catechism Cataclysm, and the prize-winning short ﬁlm Rat Pack Rat (WFF 2014). ohal’s surreal, gag-ﬁlled style follows Osborne on a memorable trip to San Diego’s annual Comic-Con where our technology-consumed hero is obsessed with thoughts of an approaching apocalypse and even more troubled by an earworm that forces him to keep hearing Swing Out Sister’s 1980s hit “Breakout.” Adding to Osborne’s deteriorating state-of-mind is another series of frustrating encounters with the opposite sex, encounters that lead to what we can only call a singular ending. Filled with bizarre visuals (including animation by Adventure Time‘s Pendleton Ward) and big, big laughs, Uncle Kent 2 beats the odds and joins the superior sequel ranks of The Godfather, Part II and Gremlins 2. 2015 SXSW Film Festival. (JH)

an annual festival celebrating their brotherhood. Within this model community, documentarians Bill and Turner Ross train their camera on two American archetypes: the lawman and the cowboy. Eagle Pass Mayor Chad Foster and ﬁfth-generation cattleman artin Wall are a pair of charismatic straight shooters whose livelihoods depend on the peace that exists at their border. But as violence from Mexican drug cartels inches into Piedras Negras, fear and mistrust begin to take hold on the US side, threatening the delicate harmony that bridges these border towns. At the forefront of new documentary cinema, the Ross brothers follow their subjects with total dedication, capturing countless small moments that add up to an incredibly vivid rendering of character and place. With brilliant ﬁlmmaking and a novelistic level of detail, Western brilliantly portrays a town—and country—at a crossroads. US Documentary Special Jury Award, 2015 Sundance Film Festival. (MK) 31