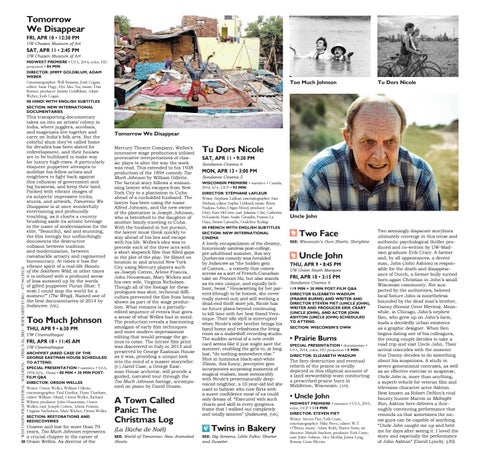 This transporting documentary takes us into an artists’ colony in India, where jugglers, acrobats, and magicians live together and carry on India’s folk arts. But the colorful slum they’ve called home for decades has been slated for redevelopment, and their houses are to be bulldozed to make way for luxury high-rises. A particularly eloquent puppeteer attempts to mobilize his fellow artists and neighbors to ﬁght back against this collusion of government and big business, and keep their land. Packed with vibrant images of its subjects’ impressive tricks, stunts, and artwork, Tomorrow We Disappear is at once wonderfully entertaining and profoundly troubling, as it charts a country brushing aside its artistic heritage in the name of modernization for the elite. “Beautiful, sad and stunning, the ﬁlm lovingly but unﬂinchingly documents the destructive collision between tradition and modernization, between ramshackle artistry and regimented bureaucracy. At times it has the vibrant spirit of a real-life Beasts of the Southern Wild; at other times it is imbued with a profound sense of loss summed up by the words of gifted puppeteer Puran Bhat: ‘I wish I could stop the world for a moment’” (The Wrap). Named one of the best documentaries of 2014 by Indiewire. (MK)

Unseen and lost for more than 70 years, Too Much Johnson represents a crucial chapter in the career of 30 Orson Welles. As director of the

Tomorrow We Disappear Mercury Theatre Company, Welles’s innovative stage productions utilized provocative interpretations of classic plays to alter the way the work was read. This extended to his 1938 production of the 1894 comedy Too Much Johnson by William Gillette. The farcical story follows a womanizing lawyer who escapes from New York City to a plantation in Cuba ahead of a cuckolded husband. The lawyer has been using the name Alfred Johnson, and the new owner of the plantation is Joseph Johnson, who is betrothed to the daughter of another family traveling to Cuba. With the husband in hot pursuit, the lawyer must think quickly to stay ahead of his lies and escape with his life. Welles’s idea was to precede each of the three acts with a short slapstick ﬁlm that ﬁlled gaps in the plot of the play. He ﬁlmed on location in and around New York City using Mercury players such as Joseph Cotten, Arlene Francis, John Houseman, Mary Wickes and his own wife, Virginia Nicholson. Though all of the footage for these prologues was shot, technical difﬁculties prevented the ﬁlm from being shown as part of the stage production. What remains is a partiallyedited sequence of events that gives a sense of what Welles had in mind. The production reveals a fascinating amalgam of early ﬁlm techni ues and more modern impressionist editing that would presage the genius to come. he nitrate ﬁlm print was discovered in Italy in 2013 and preserved by George Eastman House as it was, providing a unique look into the mind of a master storyteller. (JC) Jared Case, a George Eastman House archivist, will provide a guided, narrated tour through the Too Much Johnson footage, accompanied on piano by David Drazin.

A lovely encapsulation of the dreamy, luxuriously aimless post-college, pre-adulthood summer, this wry Quebecois comedy was heralded by Indiewire as “the hidden gem of Cannes… a comedy that comes across as a sort of French-Canadian take on Frances Ha, but also stands as its own unique, and equally brilliant, beast.” Housesitting for her parents (though to be honest, she never really moved out) and still working a dead-end thrift store job, Nicole has no future plans beyond continuing to kill time with her best friend Veronique. Their idle idyll is interrupted when Nicole’s older brother brings his band home and refashions the living room as a makeshift recording studio. The sudden arrival of a new credit card seems like it just might save the summer, enabling the girls to, at long last, “do nothing somewhere else.” Shot in luminous black-and-white 35mm, this funny, perceptive gem incorporates surprising moments of magical realism, most memorably with Nicole’s preternaturally deepvoiced neighbor, a 10 year-old kid she used to babysit who now ﬂirts with a suave conﬁdence most of us could only dream of. “Executed with such charm and skill in every gorgeous frame that I walked out completely and totally smitten” (Indiewire). (MK)

he ﬁery destruction and eventual rebirth of the prairie is vividly depicted in this elliptical account of a land stewardship team conducting a prescribed prairie burn in Middleton, Wisconsin. (AM)

Two seemingly disparate storylines ultimately converge in this tense and authentic psychological thriller produced and co-written by UW-Madison graduate Erik Crary. A farmer and, by all appearances, a decent man, John (John Ashton) is responsible for the death and disappearance of Dutch, a former bully turned born-again Christian in John’s small Wisconsin community. Not suspected by the authorities, beloved local ﬁxture ohn is nonetheless hounded by the dead man’s brother, Danny (Ronnie Gene Blevins). Meanwhile, in Chicago, John’s nephew Ben, who grew up on John’s farm, leads a decidedly urban existence as a graphic designer. When Ben begins dating one of his colleagues, the young couple decides to take a road trip and visit Uncle John. Their arrival coincides with the moment that Danny decides to do something about his suspicions. A study in severe generational contrasts, as well as an effective exercise in suspense, Uncle John is, more than anything, a superb vehicle for veteran ﬁlm and television character actor Ashton. Best known as Robert DeNiro’s rival bounty hunter Marvin in Midnight Run, Ashton here delivers a thoroughly convincing performance that reminds us that sometimes the nicest guys can be capable of anything. “Uncle John caught me up and held me for days after seeing it. I loved the story and especially the performance of John Ashton” (David Lynch). (JH)