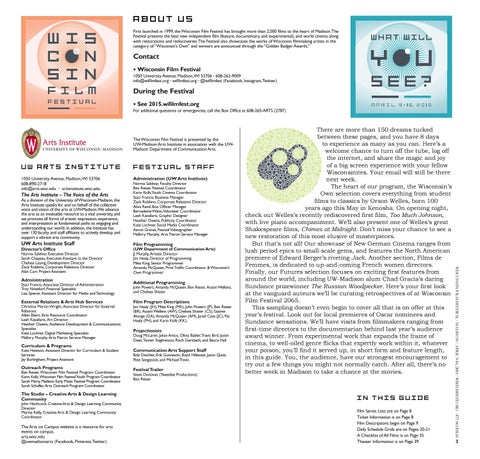 2015 WISCO FILM FEST First launched in 1999, the Wisconsin Film Festival has brought more than 2,000 ﬁlms to the heart of Madison. The Festival presents the best new independent ﬁlm (feature, documentary, and experimental), and world cinema along with restorations and rediscoveries. The Festival also showcases the works of Wisconsin ﬁlmmaking artists in the category of “Wisconsin’s Own” and winners are announced through the “Golden Badger Awards.”

FIRST LOOK AT THE

During the Festival • See 2015.wifilmfest.org

EXTRA BITS AND BOBS TO FOR FILLERS

The Wisconsin Film Festival is presented by the UW-Madison Arts Institute in association with the UWMadison Department of Communication Arts.

The Arts Institute – The Voice of the Arts

As a division of the University of Wisconsin-Madison, the Arts Institute speaks for and on behalf of the collective voice and vision of the arts at UW-Madison.We advance the arts as an invaluable resource to a vital university, and we promote all forms of artistic expression, experience, and interpretation as fundamental paths to engaging and understanding our world. In addition, the Institute has over 130 faculty and staff afﬁliates to actively develop and support a vibrant arts community.

There are more than 150 dreams tucked between these pages, and you have 8 days to experience as many as you can. Here’s a welcome chance to turn off the tube, log off the internet, and share the magic and joy of a big screen experience with your fellow Wisconsinites. Your email will still be there next week. The heart of our program, the Wisconsin’s Own selection covers everything from student ﬁlms to classics by Orson Welles, born 100 years ago this May in Kenosha. On opening night, check out Welles’s recently rediscovered ﬁrst ﬁlm, Too Much Johnson, with live piano accompaniment. We’ll also present one of Welles’s great Shakespeare ﬁlms, Chimes at Midnight. Don’t miss your chance to see a new restoration of this most elusive of masterpieces. But that’s not all! Our showcase of New German Cinema ranges from lush period epics to small-scale gems, and features the North American premiere of Edward Berger’s riveting Jack. Another section, Films de Femmes, is dedicated to up-and-coming French women directors. Finally, our Futures selection focuses on exciting ﬁrst features from around the world, including UW-Madison alum Chad Gracia’s daring Sundance prizewinner The Russian Woodpecker. Here’s your ﬁrst look at the vanguard auteurs we’ll be curating retrospectives of at Wisconsin Film Festival 2065. This sampling doesn’t even begin to cover all that is on offer at this year’s festival. Look out for local premieres of Oscar nominees and Sundance sensations. We’ll have visits from ﬁlmmakers ranging from ﬁrst-time directors to the documentarian behind last year’s audience award winner. From experimental work that expands the frame of cinema, to well-oiled genre ﬂicks that expertly work within it, whatever your poison, you’ll ﬁnd it served up, in short form and feature length, in this guide. You, the audience, have our strongest encouragement to try out a few things you might not normally catch. After all, there’s no better week in Madison to take a chance at the movies.