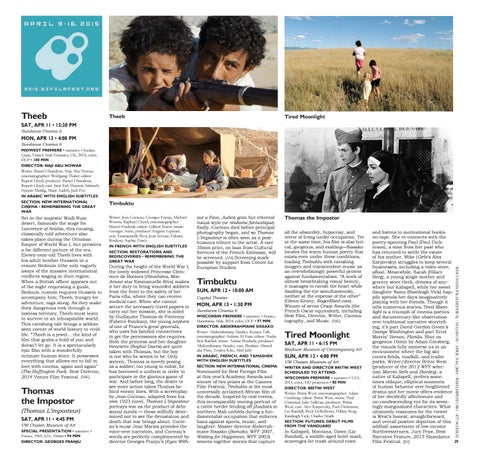 Set in the majestic Wadi Rum desert, famously the stage for Lawrence of Arabia, this rousing, classically told adventure also takes place during the Ottoman Empire of World War I, but presents a far different picture of the era. Eleven-year-old Theeb lives with his adult brother Hussein in a remote Bedouin tribe only vaguely aware of the massive international conﬂicts waging in their region. When a ritish ofﬁcer appears out of the night requesting a guide, Bedouin custom requires Hussein to accompany him; Theeb, hungry for adventure, tags along. As they make their dangerous trek through a lawless territory, Theeb must learn to survive in an inhospitable world. This ravishing tale brings a seldom seen corner of world history to vivid life. “Theeb is a jewel… the kind of ﬁlm that grabs a hold of you and doesn’t let go. It is a spectacularly epic ﬁlm with a wonderfully intimate human story. It possesses everything that allows me to fall in love with cinema, again and again” ( he uf n on o ). Best Director, 2014 Venice Film Festival. (MK)

IN FRENCH WITH ENGLISH SUBTITLES SECTION: RESTORATIONS AND REDISCOVERIES • REMEMBERING THE GREAT WAR

During the height of the World War I, the lovely widowed Princesse Clemence de Bormes ( i o him Mon Amour star Emmanuelle Riva) makes it her duty to bring wounded soldiers from the front to the safety of her Paris villa, where they can receive medical care. When she cannot secure the necessary travel papers to carry out her mission, she is aided by Guillaume Thomas de Fontenoy (Fabrice Rouleau), the young nephew of one of France’s great generals, who uses his familial connections to get the permissions she requires. Both the princess and her daughter Henriette (Sophie Darès) are quite taken with Thomas, but the boy is not who he seems to be. Only sixteen, Thomas is merely posing as a soldier; too young to enlist, he has borrowed a uniform in order to participate in the glorious game of war. And before long, the desire to see more action takes Thomas behind enemy lines. With a screenplay by Jean Cocteau, adapted from his own 1923 novel, hom m o eu portrays war as the product of delusional minds — those willfully determined not to see the devastation and death that war brings about. Cocteau’s muse Jean Marais provides the voice-over narration, and Cocteau’s words are perfectly complemented by director Georges Franju’s ( e i h-

ou e, Judex) grim but ethereal visual style (or li me f n i ue). Sadly, Cocteau died before principal photography began, and so hom m o eu is often seen as a posthumous tribute to the artist. A rare 35mm print, on loan from Cultural Services of the French Embassy, will be screened. (AM) Screening made possible by support from Center for European Studies.

Nominated for Best Foreign Film at this year’s Academy Awards and winner of two prizes at the Cannes Film Festival, im u u is the most universally acclaimed frican ﬁlm of the decade. Inspired by real events, this incomparably moving portrait of a cattle herder fending off jihadists in northern Mali unfolds during a fundamentalist occupation that enforces bans against sports, music, and laughter. Master director Abderrahmane Sissako (Bamako, WFF 2007, i in fo ine , WFF 2003) weaves together stories that capture

Thomas the Impostor all the absurdity, hypocrisy, and terror of living under occupation. Yet at the same time, his ﬁlm is also lyrical, gorgeous, and exalting—Sissako locates the warm human poetry that exists even under these conditions, loading im u u with ravishing imagery and transcendent music as an overwhelmingly powerful protest against fundamentalism. “A work of almost breathtaking visual beauty, it manages to ravish the heart while dazzling the eye simultaneously, neither at the expense of the other” (Glenn Kenny, o e e om). Winner of seven César Awards (the French Oscar equivalent), including Best Film, Director, Writer, Cinematography, and Music. (MK)

and listens to motivational bookson-tape. She re-connects with the poetry-spouting Paul (Paul Dickinson), a man from her past who has returned to settle the estate of his mother. Mike ( i l ‘s Alex Karpovsky) struggles to keep several businesses, including a video store, aﬂoat. eanwhile, Sarah Hilary Berg), a young single mother and grocery store clerk, dreams of anywhere but Kalispell, while her sweet daughter Rainy (Rainleigh Vick) happily spends her days imaginatively playing with her friends. Though it tells numerous stories, Tired Moonli h is a triumph of cinema poetics and documentary-like observation over traditional narrative storytelling; it’s part David Gordon Green’s eo e hin on and part Errol Morris’ e non lo id . Shot on gorgeous 16mm by Adam Ginsberg, the visuals fully immerse us in an environment where the big sky covers ﬁelds, roadkill, and trailer parks. Writer/director Britni West (producer of the 2012 WFF selection M in Se h nd S nle ), a native of Kalispell, prefers sometimes oblique, elliptical moments of human behavior over heightened drama and her movie offers evidence of her decidedly affectionate and un-condescending eye for its seemingly marginalized characters. What ultimately resonates for the viewer is West’s honest, straightforward, and overall positive depiction of this oddball assortment of low-income Northwesterners. Jury Prize, Best Narrative Feature, 2015 Slamdance Film Festival. (JH) 29