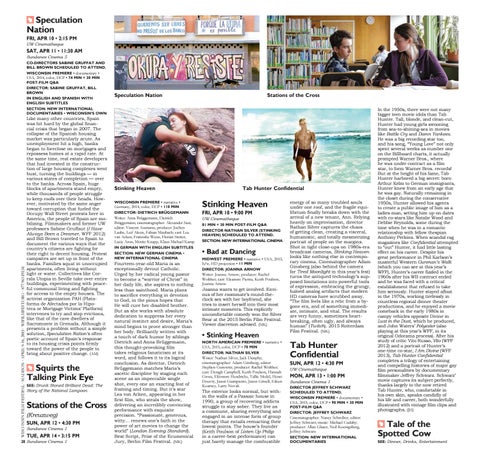 Like many other countries, Spain was hit hard by the global ﬁnancial crisis that began in 2007. The collapse of the Spanish housing market was particularly acute. As unemployment hit a high, banks began to foreclose on mortgages and repossess homes at a rapid rate. At the same time, real estate developers that had invested in the construction of large housing complexes went bust, turning the buildings — in various states of completion — over to the banks. Across Spain, huge blocks of apartments stand empty, while thousands of people struggle to keep roofs over their heads. However, motivated by the same anger toward corruption that fueled the Occupy Wall Street protests here in America, the people of Spain are mobilizing. Filmmakers and former UW professors Sabine Gruffaut (I Have Always Been a Dreamer, WFF 2012) and Bill Brown traveled to Spain to document the various ways that the country’s citi ens are ﬁghting for their right to decent housing. Protest campsites are set up in front of the banks. Families squat in unoccupied apartments, often living without light or water. Collectives like Corrala Utopia in Seville take over entire buildings, experimenting with peaceful communal living and ﬁghting for access to the empty houses. The activist organization PAH (Plataforma de Afectados por la Hipoteca or Mortgage Victims’ Platform) intervenes to try and stop evictions, like that of the cave dwellers of Sacromonte in Grenada. Although it presents a problem without a simple solution, Speculation Nation’s often poetic account of Spain’s response to its housing crisis points ﬁrmly toward the power of the people to bring about positive change. (AM)

Story of the National Lampoon

Stations of the Cross

Fourteen-year-old Maria is an exceptionally devout Catholic. Urged by her radical young pastor to become a “warrior of Christ” in her daily life, she aspires to nothing less than sainthood. Maria plans to sacriﬁce everything in devotion to God, in the pious hopes that He will cure her disabled brother. But as she works with absolute dedication to suppress her every natural instinct and desire, Maria’s mind begins to prove stronger than her body. Brilliantly written with a touch of dark humor by siblings Dietrich and Anna Brüggemann, this thought-provoking ﬁlm takes religious fanaticism at its word, and follows it to its logical conclusion. As director, Dietrich Brüggemann matches Maria’s ascetic discipline by staging each scene as an impeccable single shot, every one an exacting feat of framing and timing. But it’s star Lea von Acken, appearing in her ﬁrst ﬁlm, who steals the show, delivering an incredibly convincing performance with exquisite precision. “Passionate, generous, witty… renews one’s faith in the power of art movies to change the world” (London Evening Standard). Best Script, Prize of the Ecumenical Jury, Berlin Film Festival. (MK)

Joanna wants to get involved. Envious of her roommate’s round-theclock sex with her boyfriend, she tries to insert herself into their most intimate moments. This explicitly uncomfortable comedy won the Silver Bear at the 2015 Berlin Film Festival. Viewer discretion advised. (MK)

The exterior looks normal, but within the walls of a Passaic house in 1990, a group of recovering addicts struggle to stay sober. They live as a commune, sharing everything and engaged in an intense form of group therapy that entails reenacting their lowest points. The house’s founder (Keith Poulson of Listen Up Philip in a career-best performance) can just barely manage the combustible

energy of so many troubled souls under one roof, and the fragile equilibrium ﬁnally breaks down with the arrival of a new tenant, Ann. Relying heavily on improvisation, director Nathan Silver captures the chaos of getting clean, creating a visceral, humanistic, and totally mesmerizing portrait of people on the margins. Shot in tight close-ups on 1980s-era broadcast cameras, Stinking Heaven looks like nothing else in contemporary cinema. Cinematographer Adam Ginsberg (also behind the camera for Tired Moonlight in this year’s fest) turns the antiqued technology’s supposed limitations into powerful tools of expression, embracing the grungy, haloed analog artifacts that modern HD cameras have scrubbed away. he ﬁlm feels like a relic from a bygone era, and of something immediate, intimate, and vital. The results are very funny, sometimes heartbreaking, often ugly, and always human” (Twitch). 2015 Rotterdam Film Festival. (MK)

In the 1950s, there were not many bigger teen movie idols than Tab Hunter. Tall, blonde, and clean-cut, Hunter had young girls swooning from sea-to-shining-sea in movies like Battle Cry and Damn Yankees. He was a big recording star too, and his song, “Young Love” not only spent several weeks as number one on the Billboard charts, it actually prompted Warner Bros., where he was under contract as a ﬁlm star, to form Warner Bros. records! But at the height of his fame, Tab Hunter harbored a big secret: born Arthur Kelm to German immigrants, Hunter knew from an early age that he was gay. Naturally remaining in the closet during the conservative 1950s, Hunter allowed his agents to create a public image of him as a ladies man, setting him up on dates with co-stars like Natalie Wood and Debbie Reynolds, some during the time when he was in a romantic relationship with fellow thespian Anthony Perkins. When scandal rag magazines like on den i l attempted to “out” Hunter, it had little lasting effect on his career. Despite his great performance in Phil Karlson’s masterful Western Gunman’s Walk (which you can see at this year’s WFF , Hunter’s career ﬁ led in the 1960s after his WB contract ended and he was faced with a critical establishment that refused to take him seriously. Hunter stayed aﬂoat in the 1970s, working tirelessly in countless regional dinner theater productions, and he enjoyed a movie comeback in the early 1980s in campy vehicles opposite Divine in Lust in the Dust, which he produced, and John Waters’ Polyester (also playing at this year’s WFF, in its original Odorama process). After his study of critic Vito Russo, Vito (WFF 2012) and a portrait of Hunter’s one-time co-star, I Am Divine (WFF 2013), un e on den i l completes a trilogy of entertaining and compelling histories of major gay ﬁlm personalities by documentary ﬁlmmaker effrey Schwar . Schwar ’ movie captures its subject perfectly, thanks largely to the now retired Tab Hunter, who, comfortable in his own skin, speaks candidly of his life and career, both wonderfully illustrated with vintage ﬁlm clips and photographs. (JH)

Tale of the Spotted Cow