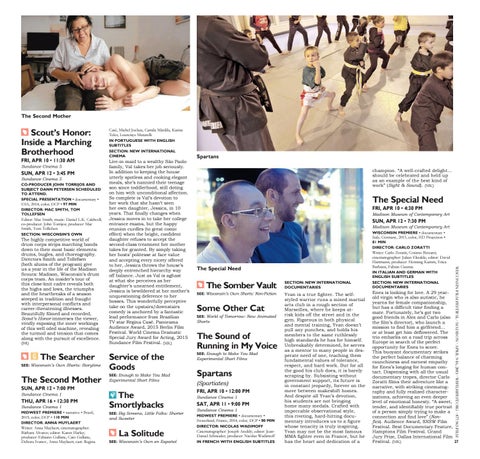 Live-in maid to a wealthy São Paolo family, Val takes her job seriously. In addition to keeping the house utterly spotless and cooking elegant meals, she’s nannied their teenage son since toddlerhood, still doting on him with unconditional affection. So complete is Val’s devotion to her work that she hasn’t seen her own daughter, Jessica, in 10 years. hat ﬁnally changes when Jessica moves in to take her college entrance exams, but the happy reunion curdles (to great comic effect when the bright, conﬁdent daughter refuses to accept the second-class treatment her mother takes for granted. By simply taking her hosts’ politesse at face value and accepting every nicety offered to her, Jessica throws the house’s deeply entrenched hierarchy way off balance. Just as Val is aghast at what she perceives as her daughter’s unearned entitlement, Jessica is bewildered at her mother’s unquestioning deference to her bosses. This wonderfully perceptive take on the upstairs/downstairs comedy is anchored by a fantastic lead performance from Brazilian TV star Regina Casé. Panorama Audience Award, 2015 Berlin Film Festival. World Cinema Dramatic Special Jury Award for Acting, 2015 Sundance Film Festival. (MK)

The Sound of Running in My Voice

champion. “A well-crafted delight… should be celebrated and held up as an example of the best kind of work” (Sight &amp; Sound). (MK)

Service of the Goods

van is a true ﬁghter. he selfstyled warrior runs a mixed martial arts club in a rough section of Marseilles, where he keeps atrisk kids off the street and in the gym. Rigorous in both physical and mental training, Yvan doesn’t pull any punches, and holds his members to the same ruthlessly high standards he has for himself. Unbreakably determined, he serves as a mentor to many people in desperate need of one, teaching them fundamental values of tolerance, respect, and hard work. But for all the good his club does, it is barely scraping by. Subsisting without government support, its future is in constant jeopardy, forever on the move between makeshift homes. And despite all Yvan’s devotion, his students are not bringing home many medals. Crafted with impeccable observational style, this riveting, hard-hitting documentary introduces us to a ﬁgure whose tenacity is truly inspiring. Yvan may not be the most famous ﬁghter even in France, but he has the heart and dedication of a

The highly competitive world of drum corps strips marching bands down to their most basic elements: drums, bugles, and choreography. Directors Smith and Tollefsen (both alums of the program) give us a year in the life of the Madison Scouts: Madison, Wisconsin’s drum corps team. An insider’s tour of this close-knit cadre reveals both the highs and lows, the triumphs and the heartbreaks of a season steeped in tradition and fraught with interpersonal conﬂicts and career-threatening illnesses. eautifully ﬁlmed and recorded, Scout’s Honor immerses the viewer, vividly exposing the inner workings of this well oiled machine, revealing the turmoil and tension that comes along with the pursuit of excellence.

Enea is looking for love. A 29 yearold virgin who is also autistic, he yearns for female companionship, but has a difﬁcult time ﬁnding a mate. Fortunately, he’s got two good friends in Alex and Carlo (also the ﬁlm’s director , who launch a mission to ﬁnd him a girlfriend or at least get him deﬂowered. he trio embarks on a road trip across Europe in search of the perfect opportunity for Enea to score. This buoyant documentary strikes the perfect balance of charming raunchiness and earnest empathy for Enea’s longing for human contact. Dispensing with all the usual documentary tropes, director Carlo oratti ﬁlms their adventure like a narrative, with striking cinematography and fully realized characterizations, achieving an even deeper level of emotional honesty. “A sweet, tender, and identiﬁably true portrait of a person simply trying to make a connection and ﬁnd love Non). Audience Award, SXSW Film Festival. Best Documentary Feature, Hamptons Film Festival. Grand Jury Prize, Dallas International Film Festival. (MK) 27