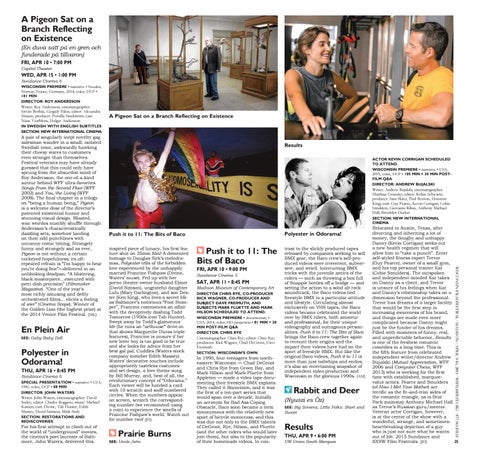 A Pigeon Sat on a Branch Reflecting on Existence

A Pigeon Sat on a Branch Reflecting on Existence

For his ﬁrst attempt to climb out of the world of “underground” movies, the cinema’s poet laureate of Baltimore, John Waters, delivered this

Push it to 11: The Bits of Baco inspired piece of lunacy, his ﬁrst feature shot on mm ﬁlm demented homage to Douglas Sirk’s melodramas, Polyester tells of the forbidden love experienced by the unhappily married Francine Fishpaw (Divine, Waters’ muse). Fed up with her porno theater owner husband Elmer (David Simson), ungrateful daughter Lulu (Mary Garlington), and son Dexter (Ken King), who lives a secret life as Baltimore’s notorious “Foot Stomper”, Francine commences an affair with the deceptively dashing Todd Tomorrow (1950s icon Tab Hunter). Swept away by Todd’s glamorous life (he runs an “arthouse” drive-in that shows Marguerite Duras triple features), Francine is unsure if her new lover boy is too good to be true and she looks for advice from her best gal pal, Cuddles (Waters stock company member Edith Massey). Waters’ decorative touches include appropriately tasteless costumes and set design, a love theme sung by Bill Murray, and, best of all, the revolutionary concept of “Odorama.” Each viewer will be handed a card with 10 scratch and sniff numbered circles. When the numbers appear on screen, scratch the corresponding number (we recommend using a coin) to experience the smells of Francine Fishpaw’s world. Watch out for number two (JH)

In 1990, four teenagers from northeastern Wisconsin had e root and Chris Rye from Green Bay, and Mark Hilson and Mark Fluette from ppleton made a video tape documenting their freestyle BMX exploits. They called it Bacovision, and it was the ﬁrst of a ten-part series that would span over a decade. Initially an acronym for Bad Ass Coping Obstacle, Baco soon became a term synonymous with the relatively new sport of bicycle motocross, and this was due not only to the BMX talents of DeGroot, Rye, Hilson, and Fluette (and the other riders who would later join them), but also to the popularity of their homemade videos. In con-

trast to the slickly produced tapes released by companies seeking to sell BMX gear, the Baco crew’s self-produced videos were irreverent, subversive, and weird. Intercutting BMX tricks with the juvenile antics of the riders such as throwing a box full of Snapple bottles off a bridge and setting the action to a solid alt rock soundtrack, the Baco videos tied freestyle BMX to a particular attitude and lifestyle. Circulating almost exclusively on VHS tapes, the Baco videos became celebrated the world over by BMX riders, both amateur and professional, for their unique videography and outrageous personalities. Push it to 11: The Bits of Baco brings the Baco crew together again to recount their origins and the impact their videos have had on the sport of freestyle BMX. But like the original Baco videos, Push it to 11 is more than just tailwhips and endos; it’s also an entertaining snapshot of independent video production and Wisconsin in the glorious 1990s. (AM)

Relocated to Austin, Texas, after divorcing and inheriting a lot of money, the doughy and unhappy Danny (Kevin Corrigan) seeks out a new health regimen that will allow him to “take a punch”. Enter self-styled ﬁtness expert revor (Guy Pearce), owner of a small gym, and his top personal trainer Kat (Cobie Smulders). The outspoken and independent-minded Kat takes on Danny as a client, and Trevor is unsure of his feelings when Kat and Danny’s relationship takes on a dimension beyond the professional. Trevor has dreams of a larger facility that would be the ﬁrst step in increasing awareness of his brand, and things are made even more complicated because Danny might just be the funder of his dreams. Filled with moments of funny, real, and unpredictable behavior, Results is one of the freshest romantic comedies in a long time. This is the ﬁfth feature from celebrated independent writer/director Andrew Bujalski (Mutual Appreciation, WFF 2006 and Computer Chess, WFF 01 who is working for the ﬁrst time with established, marqueevalue actors. Pearce and Smulders (of How I Met Your Mother) are terriﬁc as the ﬁt-and-trim sides of the romantic triangle, as is Brat Pack mainstay Anthony Michael Hall as Trevor’s Russian guru/mentor. Veteran actor Corrigan, however, is at the center of the show with a wonderful, strange, and sometimesheartbreaking depiction of a guy who is just not sure what he wants out of life. 2015 Sundance and 25 SXSW Film Festivals. (JH)

A pair of singularly inept novelty gag salesman wander in a small, isolated Swedish town, awkwardly hawking their cheesy wares to customers even stranger than themselves. Festival veterans may have already guessed that this could only have sprung from the absurdist mind of Roy Andersson, the one-of-a-kind auteur behind WFF ultra-favorites Songs From the Second Floor (WFF 2002) and You, the Living (WFF 00 . he ﬁnal chapter in a trilogy on “being a human being,” Pigeon is a welcome dose of the director’s patented existential humor and stunning visual design. Bloated, wan weirdos numbly shufﬂe through Andersson’s characteristically dazzling sets, somehow landing on their odd punchlines with uncanny comic timing. Strangely funny and strangely sad as ever, Pigeon is not without a certain cockeyed hopefulness; its oftrepeated refrain is “I’m happy to hear you’re doing ﬁne delivered in an unblinking deadpan. “A blistering, black masterpiece…executed with petri dish precision” (Filmmaker Magazine). “One of the year’s most richly amusing and deftly orchestrated ﬁlms elicits a feeling of awe” (Cinema Scope). Winner of the Golden Lion (the highest prize) at the 2014 Venice Film Festival. (MK)