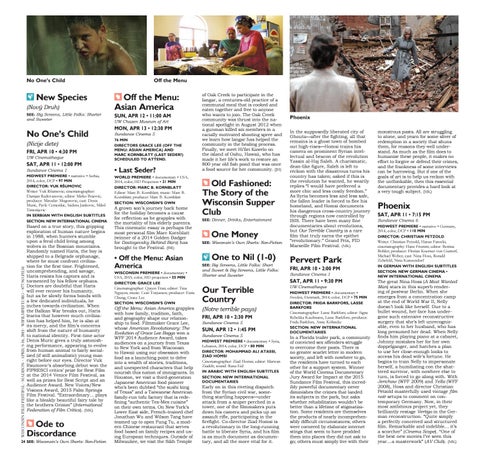 Based on a true story, this gripping exploration of human nature begins in 1988, when hunters stumble upon a feral child living among wolves in the Bosnian mountains. Randomly named Haris, the boy is shipped to a Belgrade orphanage, where he must confront civilization for the ﬁrst time. Frightened, uncomprehending, and savage, Haris resists his captors and is tormented by his fellow orphans. Doctors are doubtful that Haris will ever recover his humanity, but as he slowly forms bonds with a few dedicated individuals, he inches towards civilization. When the Balkan War breaks out, Haris learns that however much civilization has helped him, he is also at its mercy, and the ﬁlm’s concerns shift from the nature of humanity to national identity. First-time actor Denis Muric gives a truly astonishing performance, appearing to evolve from human animal to fairly socialized (if still animalistic) young man right before our eyes. Director Vuk sumovic’s absorbing debut won the F S critics’ pri e for est Film at the 01 enice Film Festival, as well as pri es for est Script and an Audience Award. New Voices/New isions ward, 01 alm Springs Film Festival. xtraordinary plays like a bleakly beautiful fairy tale by the brothers Grimm” (International Federation of Film Critics). (MK)

grown son’s ourney back home for the holiday becomes a cause for reﬂection as he grapples with the mortality of his elderly parents. This cinematic essay is perhaps the most personal ﬁlm arc ornblatt (winner of a 2014 Golden Badger for Dostoyevsky Behind Bars) has brought to the Festival. (BR)

• Off the Menu: Asian America

Off the Menu: Asian America grapples with how family, tradition, faith, and geography shape our relationship to food. Filmmaker race ee, whose American Revolutionary: The Evolution of Grace Lee Boggs won a WFF 01 udience ward, takes audiences on a ourney from exas to New York and from Wisconsin to Hawaii using our obsession with food as a launching point to delve into a wealth of stories, traditions, and unexpected characters that help nourish this nation of immigrants. n Houston, we visit a third-generation Japanese American food pioneer who’s been dubbed the sushi king of Texas” and a Taiwanese American family-run tofu factory that is redeﬁning authentic ex- ex cuisine on their own terms. On ew ork’s ower ast side, French-trained chef Jonathan Wu and Wilson Tang have teamed up to open Fung u, a modern hinese restaurant that serves food based on family recipes and using uropean techni ues. Outside of ilwaukee, we visit the Sikh emple

of Oak reek to participate in the langar, a centuries-old practice of a communal meal that is cooked and eaten together and free to anyone who wants to oin. he Oak reek community was thrust into the national spotlight in August 2012 when a gunman killed six members in a racially motivated shooting spree and we learn how langar has helped the community in the healing process. Finally, we meet Hi’ilei awelo on the island of Oahu, Hawaii, who has made it her life’s work to restore an 00 year old ﬁsh pond that was once a food source for her community. (JH)

Phoenix n the supposedly liberated city of houta after the ﬁghting, all that remains is a ghost town of bombed out high-rises—Homsi trains his camera on prominent Syrian intellectual and beacon of the revolution assin al-Ha Saleh. charismatic, dean-like ﬁgure, Saleh is left to reckon with the disastrous turns his country has taken; asked if this is the revolution he wanted, he wearily replies would have preferred a more chic and less costly freedom.” s Syria becomes less and less safe, the fallen leader is forced to ﬂee his homeland, and Homsi documents his dangerous cross-country ourney through regions now controlled by S S. here have been many ﬁne documentaries about revolutions, but Our Terrible Country is a rare ﬁlm that truly earns the epithet revolutionary. rand rix, F arseille Film Festival. (MK)

arly on in this riveting dispatch from the Syrian civil war, something startling happens—under attack from a sniper perched in a tower, one of the ﬁlmmakers puts down his camera and picks up an assault riﬂe, participating in the ﬁreﬁght. o-director iad Homsi is a revolutionary in the long-running battle to liberate Syria, and his ﬁlm is as much document as documentary, and all the more vital for it.

n a Florida trailer park, a community of convicted sex offenders struggle to overcome their pasts. There is no greater scarlet letter in modern society, and left with nowhere to go, the residents have turned to each other for a support system. Winner of the World inema ocumentary ury ward for mpact at the 01 Sundance Film Festival, this incredibly powerful documentary never diminishes the crimes that landed its sub ects in the park, but asks whether rehabilitation wouldn’t be better than a lifetime of stigmatization. Some residents are themselves the products of nearly incomprehensibly difﬁcult circumstances others were cornered by elaborate internet stings that seem to have prodded them into places they did not ask to go; others must simply live with their

monstrous pasts. All are struggling to atone, and yearn for some sliver of redemption in a society that shuns them, for reasons they well understand. s much as the ﬁlm does to humanize these people, it makes no effort to forgive or defend their crimes, and the frankness of some interviews can be harrowing. But if one of the goals of art is to help us reckon with the unthinkable, then this essential documentary provides a hard look at a very tough sub ect. (MK)

The great Nina Hoss (A Most Wanted Man) stars in this superb rendering of postwar Berlin. When she emerges from a concentration camp at the end of World War , elly doesn’t look like herself. ue to a bullet wound, her face has undergone such extensive reconstructive surgery that she’s left unrecogni able, even to her husband, who has long presumed her dead. When Nelly ﬁnds him playing piano at a cabaret, Johnny mistakes her for her own doppelganger, and hatches a plan to use her close-enough looks to access his dead wife’s fortune. He begins to train Nelly to impersonate herself, a humiliating con the shattered survivor, with nowhere else to turn, is forced to go along with. With Jerichow WFF 00 and Yella WFF 00 , Hoss and director hristian et old masterfully used vintage lm noir setups to comment on contemporary Germany. Now, in their most ambitious pro ect yet, they brilliantly restage Vertigo in the German reconstruction. uite simply a perfectly conceived and structured ﬁlm. emarkable and indelible it’s a scorcher” (Cinema Scope . One of the best new movies ’ve seen this year a masterwork AV Club). (MK)