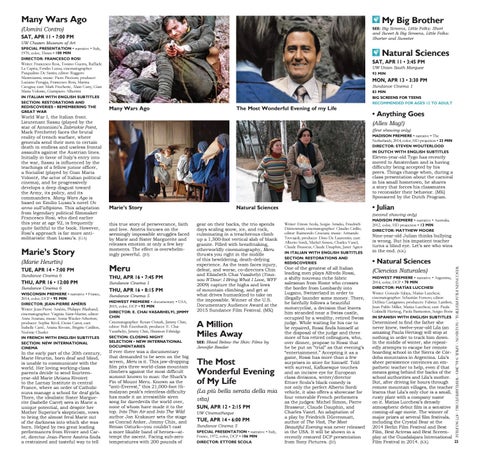 World War I, the Italian front. Lieutenant Sassu (played by the star of Antonioni’s Zabriskie Point, Mark Frechette) faces the brutal reality of trench warfare, where generals send their men to certain death in endless and useless frontal assaults against the Austrian lines. Initially in favor of Italy’s entry into the war, Sassu is inﬂuenced by the teachings of a fellow unior ofﬁcer, a Socialist (played by Gian Maria Volonté, the actor of Italian political cinema), and he progressively develops a deep disgust toward the Army, its policy, and its commanders. Many Wars Ago is based on Emilio Lussu’s novel Un anno sull’altipiano. This adaptation from legendary political ﬁlmmaker Francesco Rosi, who died earlier this year at age 92, is frequently quite faithful to the book. However, Rosi’s approach is far more antimilitaristic than Lussu’s. (GA)

In the early part of the 20th century, Marie Heurtin, born deaf and blind, is unable to communicate with the world. Her loving working-class parents decide to send fourteenyear-old Marie (Ariana Rivoire) to the Larnay Institute in central France, where an order of Catholic nuns manage a school for deaf girls. There, the idealistic Sister Marguerite (Isabelle Carré) sees in Marie a unique potential, and despite her Mother Superior’s skepticism, vows to bring the almost feral Marie out of the darkness into which she was born. Helped by two great leading performances from Rivoire and Carr , director ean- ierre m ris ﬁnds a restrained and tasteful way to tell

The Most Wonderful Evening of my Life

Eleven-year-old Tygo has recently moved to Amsterdam and is having difﬁculty being accepted by his peers. Things change when, during a class presentation about the carnival in his small hometown, he shares a story that forces his classmates to reconsider their behavior. (MK) Sponsored by the Dutch Program.

this true story of perseverance, faith and love. Améris focuses on the seemingly impossible struggles faced by Marie and Sister Marguerite and releases emotion at only a few key moments. The effect is overwhelmingly powerful. (JH)

If ever there was a documentary that demanded to be seen on the big screen, Meru is it. This jaw-dropping ﬁlm pits three world-class mountain climbers against the most difﬁcult summit known to man: the Shark’s Fin of Mount Meru. Known as the “anti-Everest,” this 21,000-foot Himalayan peak’s relentless difﬁculty has made it an irresistible siren song for daredevils the world over, none of whom have made it to the top. Into Thin Air and Into The Wild author Jon Krakauer sets the stage as Conrad Anker, Jimmy Chin, and Renan Ozturk—you couldn’t cast a more likable band of heroes—attempt the ascent. Facing sub-zero temperatures with 200 pounds of

gear on their backs, the trio spends days scaling snow, ice, and rock, culminating in a treacherous climb up a 1,500-foot vertical slab of blank granite. Filled with breathtaking, otherworldly cinematography, Meru thrusts you right in the middle of this bewildering, death-defying experience. As the team faces injury, defeat, and worse, co-directors Chin and Elizabeth Chai Vasahelyi (Youssou N’Dour: I Bring What I Love, WFF 2009) capture the highs and lows of mountain climbing, and get at what drives humankind to take on the impossible. Winner of the U.S. Documentary Audience Award at the 2015 Sundance Film Festival. (MK)

A Million Miles Away

SEE: Blood Below the Skin: Films by

One of the greatest of all Italian leading men plays Alfredo Rossi, a shifty nouveau riche fabric salesman from Rome who crosses the border from Lombardy into Lugano, Switzerland in order to illegally launder some money. There, he fatefully follows a beautiful motorcyclist, a decision that leaves him stranded near a Swiss castle, occupied by a wealthy, retired Swiss judge. While waiting for his car to be repaired, ossi ﬁnds himself at the disposal of the judge and three more of his retired colleagues, who, over dinner, propose to Rossi that he be put on “trial” as that evening’s “entertainment.” Accepting it as a game, Rossi has more than a few surprises in store for himself. Told with surreal, Kafkaesque touches and an incisive eye for European class divisions, writer/director Ettore Scola’s black comedy is not only the perfect Alberto Sordi vehicle, it also offers a showcase for four venerable French performers as the judges: Michel Simon, Pierre Brasseur, Claude Dauphin, and Charles Vanel. An adaptation of a play by Friedrich Dürrenmatt, author of The Visit, The Most Beautiful Evening was never released in the USA. It will be shown in a recently restored DCP presentation from Sony Pictures. (JH)

Nine-year-old Julian thinks bullying is wrong. But his impatient teacher turns a blind eye. Let’s see who wins in the end. (KK)

etermined to ﬁnd the father she never knew, twelve-year-old Lila (an amazing Paula Hertzog) will stop at nothing in order to track him down. In the middle of winter, she repeatedly attempts to escape her remote boarding school in the Sierra de Córdoba mountains in Argentina. Lila’s sheer persistence convinces an empathetic teacher to help, even if that means going behind the backs of the school authorities and Lila’s mother. But, after driving for hours through remote mountain villages, the teacher learns that Lila’s only clue is a small, rusty plate with a company name on it. Matías Lucchesi’s densely atmospheric debut ﬁlm is a sensitive coming-of-age movie. The winner of ma or pri es at several ﬁlm festivals, including the Crystal Bear at the 2014 Berlin Film Festival and Best Film, Best Actress and Best Screenplay at the Guadalajara International 23 Film Festival in 2014. (KK)