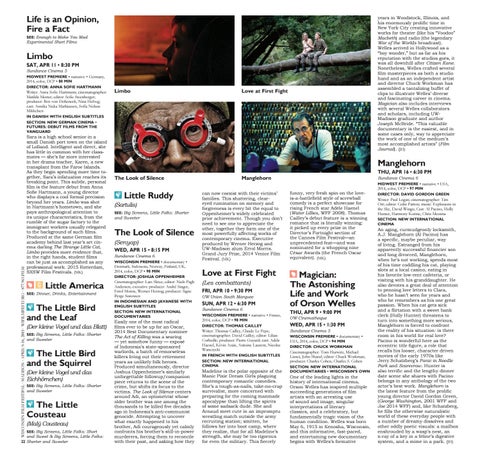 Life is an Opinion, Fire a Fact

years in Woodstock, Illinois, and his enormously proliﬁc time in New York City creating innovative works for theater like his oodoo Macbeth) and radio (the legendary War of the Worlds broadcast). Welles arrived in Hollywood as a boy wonder, but as far as his reputation with the studios goes, it was all downhill after Citizen Kane. Nonetheless, Welles crafted several ﬁlm masterpieces as both a studio hand and as an independent artist and director Chuck Workman has assembled a tantali ing buffet of clips to illustrate Welles’ diverse and fascinating career in cinema. Magician also includes interviews with several Welles collaborators and scholars, including UWMadison graduate and author Joseph McBride. “This valuable documentary is the easiest, and in some cases only, way to appreciate the work of one of the medium’s most accomplished artists Film Journal). (JH)

Sara is a high school senior in a small Danish port town on the island of Lolland. Intelligent and direct, she has little in common with her classmates — she’s far more interested in her drama teacher, Karen, a new transplant from the Faroe Islands. As they begin spending more time together, Sara’s infatuation reaches its breaking point. This subtle, personal ﬁlm is the feature debut from nna Soﬁe Hartmann, a young director who displays a cool formal precision beyond her years. Limbo was shot in Hartmann’s hometown, and she pays anthropological attention to its unique characteristics, from the rumble of the sugar factory to the immigrant workers usually relegated to the background of such ﬁlms. roduced at the same erman ﬁlm academy behind last year’s art cinema darling The Strange Little Cat, Limbo provides more evidence that, in the right hands, student ﬁlms can be just as accomplished as any professional work. 2015 Rotterdam, SXSW Film Festivals. (MK) GB

The Little Bird and the Leaf

The Little Bird and the Squirrel

Manglehorn The Look of Silence

can now coexist with their victims’ families. This shattering, cleareyed rumination on memory and forgiveness is every bit the equal to Oppenheimer’s widely celebrated prior achievement. Though you don’t need to see one to appreciate the other, together they form one of the most powerfully affecting works of contemporary cinema. Executive produced by Werner Her og and UW-Madison alum Errol Morris. rand ury ri e, 01 enice Film Festival. (MK)

funny, very fresh spin on the loveis-a-battleﬁeld style of screwball comedy is a perfect showcase for rising French star d le Haenel (Water Lillies, WFF 2008). Thomas Cailley’s debut feature is a winning romance that is literally winning: it picked up every pri e in the Director’s Fortnight section of the Cannes Film Festival—an unprecedented feat—and was nominated for a whopping nine sar wards the French Oscar equivalent). (MK)

Magician: The Astonishing Life and Work of Orson Welles

Easily one of the most radical ﬁlms ever to be up for an Oscar, 2014 Best Documentary nominee The Act of Killing was a searing — yet somehow funny — exposé of Indonesia’s state-sponsored warlords, a batch of remorseless killers living out their retirement years as unlikely folk heroes. Produced simultaneously, director oshua Oppenheimer’s similarly unforgettable followup/companion piece returns to the scene of the crime, but shifts its focus to the victims. The Look of Silence centers around Adi, an optometrist whose older brother was one among the thousands to be killed ﬁve decades ago in Indonesia’s anti-communist genocide. Attempting to uncover what exactly happened to his brother, Adi courageously yet calmly confronts his brother’s still-in-power murderers, forcing them to reconcile with their past, and asking how they

Madeline is the polar opposite of the Manic Pixie Dream Girls plaguing contemporary romantic comedies. She’s a tough-as-nails, take-no-crap survivalist, more concerned with preparing for the coming manmade apocalypse than lifting the spirits of some sadsack dude. She and Arnaud meet cute in an impromptu wrestling match outside the army recruiting station; smitten, he follows her into boot camp, where they reali e, that for all adeline’s strength, she may be too rigorous for even the military. his ﬁercely

One of the leading lights in the history of international cinema, Orson Welles has inspired multiple succeeding generations of ﬁlm artists with an arresting use of sound and image, singular interpretations of literary classics, and a celebratory, but fundamentally tragic vision of the human condition. Welles was born May 6, 1915 in Kenosha, Wisconsin, and this informative, fast-paced, and entertaining new documentary begins with Welles’s formative

An aging, curmudgeonly locksmith, A.J. Manglehorn (Al Pacino) has a speciﬁc, maybe peculiar, way of living. Estranged from his apparently successful ﬁnancier son and long divorced, Manglehorn, when he’s not working, spends most of his time coddling his cat, playing slots at a local casino, eating in his favorite low-rent cafeteria, or visiting with his granddaughter. He also devotes a great deal of attention to penning love letters to Clara, who he hasn’t seen for years and who he remembers as his one great passion. When his cat gets sick and a ﬂirtation with a sweet bank clerk Holly Hunter threatens to turn into something more serious, Manglehorn is forced to confront the reality of his situation: is there room in his world for real love? Pacino is wonderful here as the eccentric title ﬁgure, a role that recalls his looser, character driven movies of the early 1970s like erry Schat berg’s Panic in Needle Park and Scarecrow. Hunter is also terriﬁc and the lengthy dinner date scene she shares with Pacino belongs in any anthology of the two actor’s best work. Manglehorn is the latest feature from the proliﬁc young director David Gordon Green, (George Washington, 2001 WFF and Joe 01 WFF and, like Schat berg, he ﬁlls the otherwise naturalistic world of these everyday people with a number of dreamy dissolves and other oddly poetic visuals: a mailbox enshrouded by a wasp’s nest, an x-ray of a key in a feline’s digestive system, and a mime in a park. (JH)