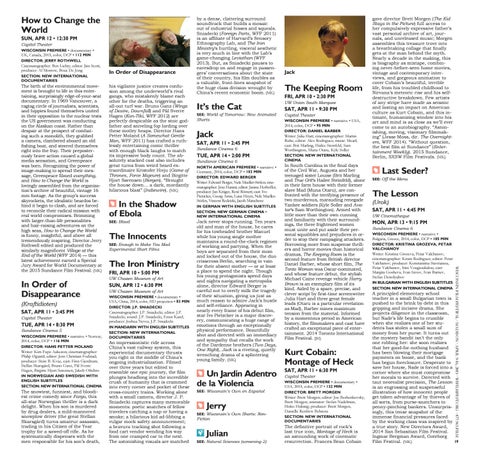 The snowiest, funniest, and bloodiest crime comedy since Fargo, this all-star Norwegian thriller is a dark delight. When his son is murdered by drug dealers, a mild-mannered snowplow driver (the great Stellan Skarsgård) turns amateur assassin, trading in his Citizen of the Year trophy for a sawed-off riﬂe. s he systematically dispenses with the men responsible for his son’s death,

In the Shadow of Ebola SEE: Blood

An impressionistic ride across China’s vast railway system, this experiential documentary thrusts you right in the middle of China’s ongoing industrialization. Filmed over three years but edited to resemble one epic ourney, the ﬁlm plunges headlong into the incredible crush of humanity that is crammed into every corner and pocket of these cross-country trains. Working alone with a small camera, director J. P. Sniadecki captures many memorable moments: poetic snatches of fellow travelers catching a nap or having a smoke; a hilarious kid ad-libbing a vulgar mock safety announcement; a bravura tracking shot following a food cart vendor wending his way from one cramped car to the next. The astonishing visuals are matched

Jack never stops running. Ten years old and man of the house, he cares for his towheaded brother Manuel while his young single mother maintains a round-the-clock regimen of working and partying. When the boys are separated from their mom and locked out of the house, the duo crisscross Berlin, searching in vain for their absent mother — or at least a place to spend the night. Though his young protagonists spend days and nights navigating a metropolis alone, director Edward Berger is careful not to overly milk the tragedy of their situation, giving us just as much reason to admire Jack’s hustle and self-reliance. Appearing in nearly every frame of his debut ﬁlm, star Ivo Pietzcker is a major discovery, communicating a huge range of emotions through an exceptionally physical performance. Beautifully shot and directed with an immediacy and sympathy that recalls the work of the Dardenne brothers (Two Days, One Night), Jack is a riveting, quietly wrenching drama of a splintering young family. (MK)

n South arolina in the ﬁnal days of the Civil War, Augusta and her teenaged sister Louise (Brit Marling and True Grit‘s Hailee Steinfeld), alone in their farm house with their former slave Mad (Muna Otaru), are confronted with the terrifying presence of two murderous, marauding renegade Yankee soldiers (Kyle Soller and Avatar‘s Sam Worthington). Armed with little more than their own cunning and familiarity with their surroundings, the three frightened women must unite and put aside their personal squabbles and prejudices in order to stop their rampaging attackers. Borrowing more from suspense thrillers and horror movies than historical dramas, The Keeping Room is the second feature from British director aniel arber, whose short ﬁlm, The Tonto Woman was Oscar-nominated, and whose feature debut, the stylish Michael Caine revenge vehicle Harry Brown is an exemplary ﬁlm of its kind. Aided by a spare, precise, and clever script by ﬁrst-time screenwriter Julia Hart and three great female leads (Otaru is a particular revelation as Mad), Barber mines maximum tension from the material. Informed by a momentous period in American history, the ﬁlmmakers and cast have crafted an exceptional piece of entertainment. 2014 Toronto International Film Festival. (JH)

gave director Brett Morgen (The Kid Stays in the Picture) full access to her compulsively expressive father’s vast personal archive of art, journals, and unreleased music; Morgen assembles this treasure trove into a breathtaking collage that ﬁnally gets at the man behind the myth. Nearly a decade in the making, this is biography as mixtape, combining never-before-seen home movies, vintage and contemporary interviews, and gorgeous animation to cover Cobain’s beautiful, terrible life, from his troubled childhood to Nirvana’s meteoric rise and his selfdestructive breakdown. Few artists of any stripe have made as seismic and lasting an impact on American culture as Kurt Cobain, and this intimate, humanizing window into his art and mind is as close as we’ll ever come to an autobiography. “Astonishing, moving, visionary ﬁlmmaking” (Jesse Moss, dir. The Overnighters, WFF 2014). “Without question, the best ﬁlm at Sundance Entertainment Weekly). 2015 Sundance, Berlin, SXSW Film Festivals. (MK)

SEE: Off the Menu

The birth of the environmental movement is brought to life in this entertaining, surprisingly edge-of-your-seat documentary. In 1969 Vancouver, a ragtag circle of journalists, scientists, and hippies found themselves united in their opposition to the nuclear tests the US government was conducting on the Alaskan coast. Rather than despair at the prospect of combating such a monolith, they grabbed a camera, clambered aboard an old ﬁshing boat, and steered themselves right into the fray. Their preposterously brave action caused a global media sensation, and Greenpeace was born. Recognizing the power of image-making to spread their message, reenpeace ﬁlmed everything, and How to Change the World is lovingly assembled from the organization’s archive of beautiful, vintage 16 mm footage. As the group’s success skyrockets, the idealistic beardos behind it begin to clash, and are forced to reconcile their radical mission with real world compromises. Brimming with larger-than-life personalities and hair-raising adventures on the high seas, How to Change the World is funny, insightful, and above all tremendously inspiring. Director Jerry Rothwell edited and produced the similarly magniﬁcent Village at the End of the World (WFF 2014) — this latest achievement earned a Special Jury Award for World Documentary at the 2015 Sundance Film Festival. (MK)

In Order of Disappearance

by a dense, clattering surround soundtrack that builds a mosaic out of industrial hisses and squeals. Sniadecki (Foreign Parts, WFF 2011) is an afﬁliate of Harvard’s Sensory Ethnography Lab, and The Iron Ministry‘s hurtling, visceral aesthetic is very much in line with the Lab’s game-changing Leviathan (WFF 2013). But, as Sniadecki pauses to eavesdrop on and engage in passengers’ conversations about the state of their country, his ﬁlm doubles as a valuable, front-lines snapshot of the huge class division wrought by China’s recent economic boom. (MK)

A principled elementary school teacher in a small Bulgarian town is pushed to the brink by debt in this gripping and incisive drama. She projects diligence in the classroom, but Nade’s life begins to crumble when she realizes one of her students has stolen a small sum of money from her purse. It turns out the mystery bandit isn’t the only one robbing her: she soon realizes that her good-for-nothing husband has been blowing their mortgage payments on booze, and the bank has begun foreclosure. Desperate to save her house, Nade is forced into a corner where she must compromise her morals to survive. Directed with taut neorealist precision, The Lesson is an engrossing and suspenseful illustration of how innocent people get taken advantage of by thieves of all sorts, from purse-snatchers to penny-pinching bankers. Unsurprisingly, this tense snapshot of the immense ﬁnancial pressures faced by the working class was inspired by a true story. New Directors Award, 2014 San Sebasitian Film Festival. Ingmar Bergman Award, Goteborg Film Festival. (MK) 19