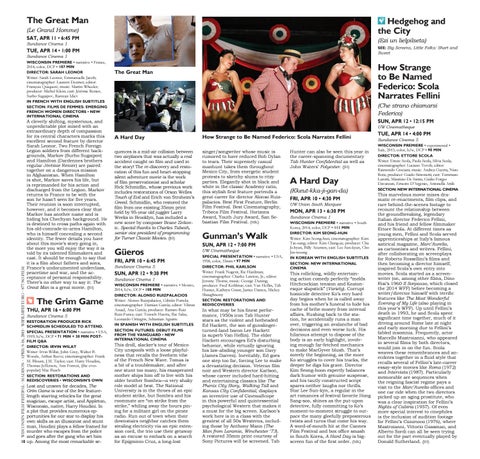 Hedgehog and the City

How Strange to Be Named Federico: Scola Narrates Fellini

A cleverly shifting, mysterious, and unpredictable plot mixed with an extraordinary depth of compassion for its central characters marks this excellent second feature by director Sarah Leonor. Two French Foreign Legion soldiers from different backgrounds, Markov (Surho Sugaipov) and Hamilton (Dardennes brothers regular Jérémie Renier) are paired together on a dangerous mission in Afghanistan. When Hamilton is shot, Markov saves his life, but is reprimanded for his action and discharged from the Legion. Markov returns to France to be with the son he hasn’t seen for ﬁve years. Their reunion is soon interrupted, however, and it becomes clear that Markov has another name and is hiding his Chechyan background. He is destined to cross paths again with his old-comrade-in-arms Hamilton, who is himself concealing a second identity. The fewer details you have about this movie’s story going in, the more you will enjoy the way it is told by its talented ﬁlmmakers and cast. It should be enough to say that it is a ﬁlm about fathers and sons, France’s undocumented underclass, peacetime and war, and the acceptance of personal responsibility. There’s no other way to say it: The Great Man is a great movie. (JH)

Lost and unseen for decades, The Grim Game is one of the few featurelength starring vehicles for the great magician, escape artist, and Appleton, Wisconsin, native, Harry Houdini. In a plot that provides numerous opportunities for our star to display his own skills as an illusionist and stunt man, Houdini plays a fellow framed for murder who escapes from the police and goes after the gang who set him 18 up. Among the most remarkable se-

How Strange to Be Named Federico: Scola Narrates Fellini

quences is a mid-air collision between two airplanes that was actually a real accident caught on ﬁlm and used in the story! The re-discovery and restoration of this fun and heart-stopping silent adventure movie is the work of ﬁlm preservationist and scholar Rick Schmidlin, whose previous work includes restorations of Orson Welles Touch of Evil and Erich von Stroheim’s Greed. Schmidlin, who restored the ﬁlm from one existing mm print held by -year old uggler arry Weeks in Brooklyn, has included a new score by composer Brane Zivkovic. Special thanks to Charles Tabesh, senior vice president of programming for Turner Classic Movies. (JH)

This droll, slacker’s tour of Mexico City unspools with a loose playfulness that recalls the freeform vibe of the French New Wave. Tomas is a bit of a troublemaker, and after one stunt too many, his exasperated mother ships him off to live with his older brother Sombra—a very shaky role model at best. The National University is in the throes of an epic student strike, but Sombra and his roommate are “on strike from the strike,” whiling away the hours pining for a militant girl on the pirate radio. Run out of town when their downstairs neighbor catches them stealing electricity via an epic extension cord, the trio use their getaway as an excuse to embark on a search for Epigminio Cruz, a long-lost

n what may be his ﬁnest performance, 1 0s icon ab Hunter stars as the violent and hotheaded Ed Hackett, the son of gunslingerturned-land baron Lee Hackett a superb an Heﬂin . he elder Hackett encourages Ed’s disturbing behavior, while virtually ignoring his law-abiding younger son Davy (James Darren). Inevitably, Ed goes one step too far, forcing Lee to make a devastating decision. eteran ﬁlm noir and Western director Karlson, whose career included hard-hitting and entertaining classics like The Phenix City Story, Walking Tall and n i on den i l, displays an inventive use of CinemaScope in this powerful and quintessential psychological Western that makes it a must for the big screen. Karlson’s work here is in a class with the greatest of all 0s Westerns, including those by Anthony Mann (The Man from Laramie, Winchester ‘73). restored mm print courtesy of Sony Pictures will be screened. Tab

Hunter can also be seen this year in the career-spanning documentary un e on den i l as well as John Waters’ Polyester. (JH)

This rollicking, wildly entertaining action comedy perfectly “melds Hitchcockian tension and Keatonesque slapstick” (Variety). Corrupt homicide detective Ko’s very hard day begins when he is called away from his mother’s funeral to hide his cache of bribe money from internal affairs. Rushing back to the station, he accidentally runs a man over, triggering an avalanche of bad decisions and even worse luck. His hilarious attempt to dispose of the body is an early highlight, involving enough far-fetched mechanics to make MacGyver blush. That’s merely the beginning, as the more Ko struggles to cover his tracks, the deeper he digs his grave. Director Kim Seong-hoon expertly balances dark humor with genuine suspense, and his tautly constructed script spares neither laughs nor thrills. Star Lee Sun-kyn, a regular in the art romances of festival favorite Hong Sang-soo, shines as the put-upon detective, fully committing to Ko’s moment-to-moment struggle to outpace the many gleefully preposterous twists and turns that come his way. A word-of-mouth hit at the Cannes Film Festival and box ofﬁce smash in South Korea, A Hard Day is bigscreen fun of the ﬁrst order. (MK)

This marvelous movie mixes dramatic re-enactments, ﬁlm clips, and rare behind-the-scenes footage to recount the relationship between the groundbreaking, legendary Italian director Federico Fellini, and his friend and fellow ﬁlmmaker Ettore Scola. At different times as young men, Fellini and Scola served apprenticeships at Italy’s famous satirical magazine, Marc’Aurelio, as cartoonists and writers. Fellini, after collaborating on screenplays for oberto ossellini’s ﬁlms and then becoming a director himself, inspired Scola’s own entry into movies. Scola started as a screenwriter on, among other ﬁlms, ino isi’s 1 0 Il Sorpasso, which closed the 01 WFF before becoming a writer director himself with terriﬁc features like The Most Wonderful Evening of My Life (also playing in this year’s WFF). Up until Fellini’s death in 1 , he and Scola spent signiﬁcant time together, much of it driving around Rome late at night and early morning due to Fellini’s fabled insomnia. Frequently, actor Marcello Mastroianni, who appeared in several ﬁlms by both directors, would join in on the fun. Scola weaves these remembrances and anecdotes together in a ﬂuid style that recalls several of Fellini’s late-career essay-style movies like Roma (1972) and Intervista (1987). Particularly memorable are sequences when the reigning fascist regime pays a visit to the Marc’Aurelio ofﬁces and one car ride when the two directors picked up an aging prostitute, who was a clear inspiration for Fellini’s Nights of Cabiria 1 . Of even more special interest to cinephiles is the inclusion of audition footage for Fellini’s Casanova (1976), where Mastroianni, Vittorio Gassman, and Alberto Sordi can all be seen trying out for the part eventually played by Donald Sutherland. (JH)