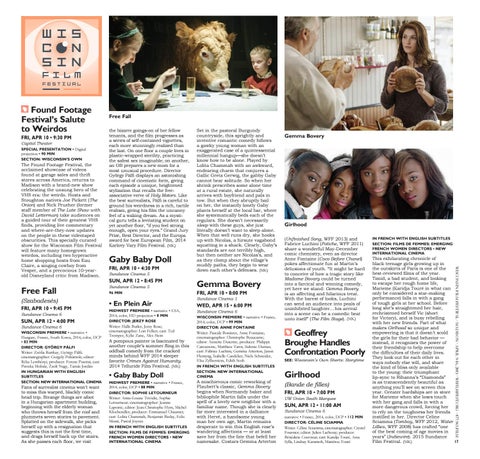 Fans of surrealist cinema won’t want to miss this warped, blackly comic head trip. Strange things are afoot in a Hungarian apartment building, beginning with the elderly woman who throws herself from the roof and plummets seven stories to pavement. Splatted on the sidewalk, she picks herself up with a resignation that suggests this is not the ﬁrst time, and drags herself back up the stairs. s she passes each ﬂoor, we visit

the bizarre goings-on of her fellow tenants, and the ﬁlm progresses as a series of self-contained vignettes, each more stunningly reali ed than the last. On one ﬂoor a couple lives in plastic-wrapped sterility, practicing the safest sex imaginable; on another, an O prepares a new mom for a most unusual procedure. irector y rgy lﬁ displays an astonishing command of cinematic form, giving each episode a uni ue, heightened styli ation that recalls the freeassociative verve of Holy Motors. Like the best surrealists, lﬁ is careful to ground his weirdness in a rich, tactile realism, giving his ﬁlm the uncanny feel of a waking dream. s a mystical guru tells a levitating student on yet another ﬂoor, if you feel strong enough, open your eyes. rand ury ri e, est irector, and the uropa award for best uropean Film, 01 arlovy ary Film Festival. (MK)

pompous painter is fascinated by another couple’s summer ﬂing in this oddball comedy from the cracked minds behind WFF 01 sleeper favorite Crimes Against Humanity. 01 elluride Film Festival. (MK)

Set in the pastoral urgundy countryside, this sprightly and inventive romantic comedy follows a gawky young woman with an exaggerated case of a uintessential millennial hangup she doesn’t know how to be alone. layed by Lolita Chammah with an awkward, endearing charm that conjures a allic reta erwig, the gabby aby cannot bear solitude. So when her shrink prescribes some alone time at a rural estate, she naturally arrives with boyfriend and pals in tow. ut when they abruptly bail on her, the instantly lonely aby plants herself at the local bar, where she systematically beds each of the regulars. She doesn’t necessarily sleep with these guys, she ust literally doesn’t want to sleep alone. When that well runs dry, she hooks up with icolas, a hirsute vagabond s uatting in a shack. learly, aby’s standards are not terribly high, but then neither are Nicolas’s, and as they clomp about the village’s muddy paths, they begin to wear down each other’s defenses. (MK)

A mischievous comic reworking of Flaubert’s classic, Gemma Bovery begins when ormandy baker and bibliophile artin falls under the spell of a lovely new neighbor with a familiar name. hough she is clearly far more interested in a dalliance with Herv , a handsome young man her own age, Martin remains desperate to win this nglish rose’s wandering affections or at least save her from the fate that befell her namesake. Costars Gemma Arterton

Girlhood ( n ni hed Son , WFF 01 and Fabrice Luchini (Potiche, WFF 011 share a wonderful ay- ecember comic chemistry, even as director Anne Fontaine (Coco Before Chanel) pokes affectionate fun at artin’s delusions of youth. t might be hard to conceive of how a tragic story like Madame Bovary could be turned into a farcical and winning comedy, yet here we stand Gemma Bovery is an affecting and hilarious treat. With the barest of looks, Luchini can send an audience into peals of uninhibited laughter… his arrival into a scene can be a comedic beat unto itself The Film Stage). (MK)

This exhilarating chronicle of black teenage girls growing up in the outskirts of Paris is one of the best-reviewed ﬁlms of the year. Timid, a bad student, and looking to escape her rough home life, Marieme (Karidja Touré in what can only be considered a star-making performance falls in with a gang of tough girls at her school. Before long she’s straightened her hair, rechristened herself Vic (short for ictory , and is busy rebelling with her new friends. Part of what makes Girlhood so uni ue and empowering is that it doesn’t scold the girls for their bad behavior instead, it recogni es the power of their friendship to help overcome the difﬁculties of their daily lives. hey look out for each other in ways nobody else will, and share the kind of bliss only available to the young their triumphant lip-sync to ihanna’s iamonds is as transcendently beautiful as anything you’ll see on screen this year. reater hardships are in store for Marieme when she loses touch with her gang and falls in with a more dangerous crowd, forcing her to rely on the toughness her friends instilled in her. Director Celine Sciamma (Tomboy, WFF 01 , Water Lillies, WFF 00 has crafted one of the best coming of age movies in years Indiewire . 01 Sundance Film Festival. (MK) 17

The Found Footage Festival, the acclaimed showcase of videos found at garage sales and thrift stores across America, returns to Madison with a brand-new show celebrating the unsung hero of the VHS era: the weirdo. Hosts and Stoughton natives Joe Pickett (The Onion) and Nick Prueher (former staff member of The Late Show with David Letterman) take audiences on a guided tour of their greatest VHS ﬁnds, providing live commentary and where-are-they-now updates on the people in these videotaped obscurities. his specially curated show for the Wisconsin Film Festival will feature many homegrown weirdos, including two hyperactive home shopping hosts from au laire, a singing cowboy from esper, and a precocious 10-yearold isneyland critic from adison.