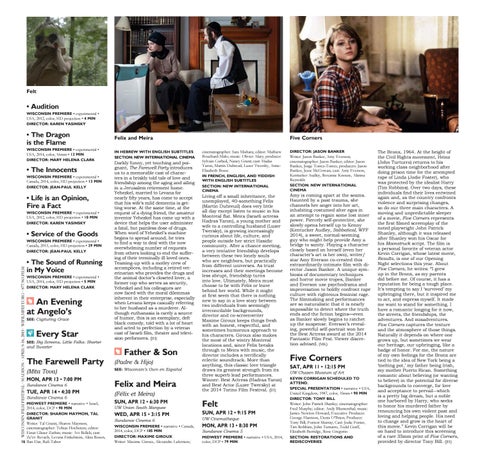 • The Dragon is the Flame

• Life is an Opinion, Fire a Fact

• Service of the Goods

• The Sound of Running in My Voice

Darkly funny, yet touching and poignant, The Farewell Party introduces us to a memorable cast of characters in a briskly told tale of love and friendship among the aging and ailing in a Jerusalem retirement home. Yehezkel, married to Levana for nearly ﬁfty years, has come to accept that his wife’s mild dementia is getting worse. At the same time, at the request of a dying friend, the amateur inventor Yehezkel has come up with a device that helps the user administer a fatal, but painless dose of drugs. When word of Yehezkel’s machine begins to spread around, he tries to ﬁnd a way to deal with the now overwhelming number of requests from others looking to end the suffering of their terminally ill loved ones. Teaming-up with a motley crew of accomplices, including a retired veterinarian who provides the drugs and the animal doctor’s closeted lover, a former cop who serves as security, Yehezkel and his colleagues are now faced with the moral dilemmas inherent in their enterprise, especially when Levana keeps casually referring to her husband as a murderer. Although euthanasia is rarely a source of humor, this is an exemplary, deft black comedy, told with a lot of heart and acted to perfection by a veteran cast of sraeli ﬁlm, theater and television performers. (JH)

Living off a small inheritance, the unemployed, 40-something Felix (Martin Dubreuil) does very little all day except listen to music in his ontreal ﬂat. eira sraeli actress Hadras Yaron), a young mother and wife to a controlling husband (Luzer Twersky), is growing increasingly curious about life, culture, and people outside her strict Hasidic community. After a chance meeting, a very tentative friendship develops between these two lonely souls who are neighbors, but practically from different universes. As trust increases and their meetings become less abrupt, friendship turns into love. Ultimately, Meira must choose to be with Felix or leave behind her world. While it might at ﬁrst seem that there is nothing new to say in a love story between two individuals from seemingly irreconcilable backgrounds, director and co-screenwriter Maxime Giroux keeps things fresh with an honest, respectful, and sometimes humorous approach to his characters. Giroux also makes the most of the wintry Montreal locations and, since Felix breaks through to Meira with music, the director includes a terriﬁcally eclectic soundtrack. More than anything, this classic love triangle draws its greatest strength from its three superb lead performances. Winner: Best Actress (Hadras Yaron) and Best Actor (Luzer Twersky) at the 2014 Torino Film Festival. (JH)

Amy is coming apart at the seams. Haunted by a past trauma, she channels her anger into her art, inhabiting costumed alter egos in an attempt to regain some lost inner power. Fiercely self-protective, she slowly opens herself up to Kenny (Kentucker Audley, Sabbatical, WFF 2014), a sweet, normal-seeming guy who might help provide Amy a bridge to sanity. Playing a character closely based on herself (even her character’s art is her own), writer/ star Amy Everson co-created this extraordinarily intimate ﬁlm with director Jason Banker. A unique symbiosis of documentary techniques and horror movie tropes, Banker and Everson use psychodrama and improvisation to boldly confront rape culture with righteous feminist rage. he ﬁlmmaking and performances are so naturalistic that it is nearly impossible to detect where the truth ends and the ﬁction begins even as Banker slowly begins to ratchet up the suspense. Everson’s revealing, powerful self-portrait won her the Best Actress award at the 2014 Fantastic Film Fest. Viewer discretion advised. (MK)

The Bronx, 1964. At the height of the Civil Rights movement, Heinz (John Turturro) returns to his working class neighborhood after doing prison time for the attempted rape of Linda (Jodie Foster), who was protected by the idealist Harry (Tim Robbins). Over two days, these individuals ﬁnd their lives entwined again and, as the country confronts violence and surprising changes, so do our three main characters. A moving and unpredictable sleeper of a movie, Five Corners represents the ﬁrst ﬁlmed screenplay of the noted playwright John Patrick Shanley, although it was released after Shanley won his Oscar for his Moonstruck script. he ﬁlm is a personal favorite of veteran actor Kevin Corrigan, whose latest movie, Results, is one of our Opening Night selections this year. About Five Corners, he writes: “I grew up in the Bronx, as my parents did before me. Of course, it has a reputation for being a tough place. It’s tempting to say I ‘survived’ my upbringing there, but it inspired me to act, and express myself. It made me want to stand for something. I have a romantic longing for it now, the streets, the friendships, the adventures. And misadventures. Five Corners captures the texture and the atmosphere of those things. Naturally it depends on where one grows up, but sometimes we wear our heritage, our upbringing, like a badge of honor. For me, the nature of my own feelings for the Bronx are tied to the idea of New York being a ‘melting pot,’ my father being Irish, my mother Puerto Rican. Something romantic about believing (or wanting to believe) in the potential for diverse backgrounds to converge, for love and acceptance to prevail--which is a pretty big dream, but a noble one harbored by Harry, who seeks to honor his murdered father by renouncing his own violent past and loving and helping people. His need to change and grow is the heart of this movie.” Kevin Corrigan will be on hand to introduce this screening of a rare 35mm print of Five Corners, provided by director Tony Bill. (JH)