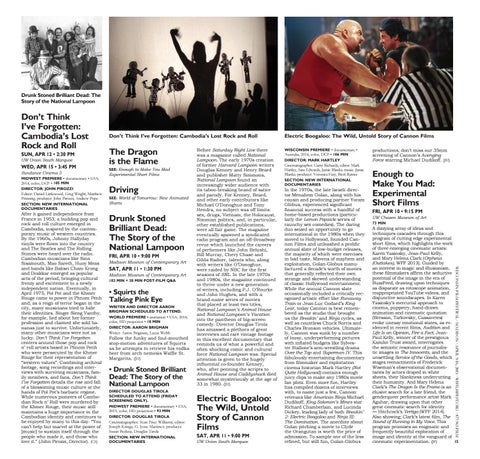 Drunk Stoned Brilliant Dead: The Story of the National Lampoon

The Dragon is the Flame

Follow the funky and foul-mouthed stop-motion adventures of Squirts as he attempts to retrieve his vodka beer from arch nemesis Wafﬂe St. Margarita. (JH)

Before Saturday Night Live there was a magazine called National Lampoon. The early 1970s creation of former Harvard Lampoon writers Douglas Kenney and Henry Beard and publisher Matty Simmons, National Lampoon found an increasingly wider audience with its taboo-breaking brand of satire and parody. For Kenney, Beard, and other early contributors like Michael O’Donoghue and Tony Hendra, no subject was off limits: sex, drugs, Vietnam, the Holocaust, Nixonian politics, and, in particular, other established publications, were all fair game. The magazine eventually spawned a syndicated radio program and an off-Broadway revue which launched the careers of performers like John Belushi, Bill Murray, Chevy Chase and Gilda Radner, talents who, along with writers like O’Donoghue, were raided by for the ﬁrst seasons of SNL. In the late 1970s and 1980s, the magazine continued to thrive under a new generation of writers, including P.J. O’Rourke and John Hughes, and with a brand-name series of movies that placed at least two titles, National Lampoon’s Animal House and National Lampoon’s Vacation into the pantheon of big-screen comedy. Director Douglas Tirola has amassed a plethora of great interviews and rare vintage footage in this excellent documentary that reminds us of what a powerful and often shocking comic and cultural force National Lampoon was. Special attention is given to the hugely inﬂuential co-founder enney, who, after penning the scripts to Animal House and Caddyshack died somewhat mysteriously at the age of 33 in 1980. (JH)

In the 1970s, the late Israeli director Menahem Golan, along with his cousin and producing partner Yoram lobus, experienced signiﬁcant ﬁnancial success with a handful of home-based productions (particularly the Lemon Popsicle series of raunchy sex comedies). The daring duo seized an opportunity to go international in the 1980s when they moved to Hollywood, founded Cannon Films and unleashed a proliﬁc annual slate of low-budget releases, the majority of which were exercises in bad taste. Mavens of mayhem and exploitation, Golan-Globus manufactured a decade’s worth of movies that generally reﬂected their own strange and skewed understanding of classic Hollywood entertainment. While the annual Cannon slate occasionally included a critically recognized artistic effort like Runaway Train or Jean-Luc Godard’s King Lear, today Cannon is best remembered as the studio that brought us the Breakin’ and Ninja cycles, as well as countless Chuck Norris and Charles Bronson vehicles. Ultimately, Cannon was sunk by a number of lousy, underperforming pictures with inﬂated budgets like Sylvester Stallone’s arm-wrestling drama Over the Top and Superman IV. This fabulously entertaining documentary from ﬁlmmaker and exploitation cinema historian Mark Hartley (Not Quite Hollywood) contains enough juicy clips to make any 1980s movie fan plotz. Even more fun, Hartley has compiled dozens of interviews with, to name just a few, Cannon veterans like American Ninja Michael Dudikoff, King Solomon’s Mines star Richard Chamberlain, and Lucinda Dickey, leading lady of both Breakin’ 2: Electric Boogaloo and Ninja III: The Domination. The anecdote about Golan pitching a movie to Clyde the Orangutan is worth the price of admission. To sample one of the less reﬁned, but still fun, olan- lobus

A dizzying array of ideas and techniques cascades through this program of cutting edge experimental short ﬁlms, which highlights the work of three emerging cinematic artists: Karen Yasinsky, Jean-Paul Kelly, and Mary Helena Clark (Orpheus (Outtakes), WFF 2013). Guided by an interest in magic and illusionism, these ﬁlmmakers afﬁrm the seductive potential of the image in the era of BuzzFeed, drawing upon techniques as disparate as rotoscope animation, reappropriated YouTube videos, and disjunctive soundscapes. In Karen Yasinsky’s mercurial approach to cinema, puppetry, hand-drawn animation and cinematic quotation (Bresson, Tarkovsky, Cassavetes) evoke uneasy emotional states, as evidenced in recent ﬁlms, Audition and Life Is an Opinion, Fire a Fact. JeanPaul Kelly, winner of the prestigious Kazuko Trust award, interrogates the semiotic resonance of journalistic images in The Innocents, and the unsettling Service of the Goods, which stages reenactments of Frederick Wiseman’s observational documentaries by actors draped in white sheets, their blankness undercutting their humanity. And Mary Helena Clark’s The Dragon Is the Frame is an elusive search for a late friend, the genderqueer performance artist Mark Aguhar, drawing upon that other great cinematic search for identity — Hitchcock’s Vertigo (WFF 2014). lso showing lark’s latest ﬁlm, The Sound of Running in My Voice. This program promises an enigmatic and frequently beautiful exploration of image and identity at the vanguard of cinematic experimentation. (JP) 15

After it gained independence from France in 1953, a budding pop and rock and roll culture emerged in Cambodia, inspired by the contemporary music of western countries. By the 1960s, Johnny Hallyday vinyls were ﬂown into the country and The Beatles and The Rolling Stones were heard over the radio. Cambodian musicians like Sinn Sisamouth, Mao Sareth, Huoy Meas and bands like Baksei Cham Krong and Drakkar emerged as popular acts of the period, bringing cultural frenzy and excitement to a newly independent nation. Eventually, in April 1975, Pol Pot and the Khmer Rouge came to power in Phnom Penh and, as a reign of terror began in the city, many musicians tried to hide their identities. Singer Sieng Vanthy, for example, lied about her former profession and claimed she sold bananas just to survive. Unfortunately, many other musicians were not as lucky. Don’t Think I’ve Forgotten centers around those pop and rock n’ roll artists based in Phnom Penh who were persecuted by the Khmer Rouge for their representation of “western values”. Combining archival footage, song recordings and interviews with surviving musicians, family members, and fans, Don’t Think I’ve Forgotten details the rise and fall of a blossoming music culture at the hands of Pol Pot’s barbaric regime. While numerous pioneers of Cambodian Rock n’ Roll were murdered by the Khmer Rouge, their music still maintains a huge importance in the Cambodian identity and continues to be enjoyed by many to this day. “You can’t help but marvel at the power of [music] to sustain itself through the people who made it, and those who love it.” (John Pirozzi, Director). (CS)