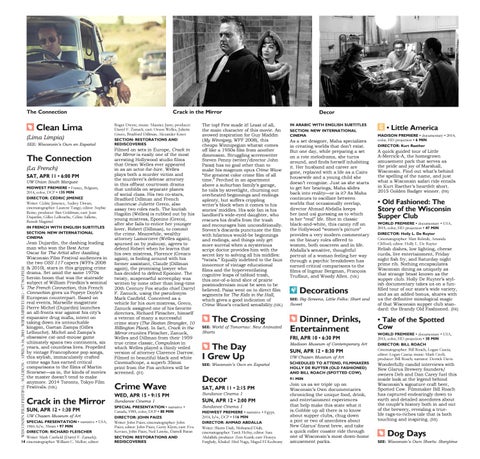 Filmed on sets in Europe, Crack in the Mirror is easily one of the most arresting Hollywood studio ﬁlms that Orson Welles ever appeared in as an actor-for-hire. Welles plays both a murder victim and the murderer’s defense attorney in this offbeat courtroom drama that unfolds on separate planes of social class. His two co-stars, Bradford Dillman and French chanteuse Juliette Greco, also assay two roles each. The loutish Hagolin (Welles) is rubbed out by his young mistress, Eponine (Greco), after she fails to entice her younger lover, Robert (Dillman), to commit the crime. Meanwhile, wealthy attorney Lamorciere (Welles again), spurned on by jealousy, agrees to defend Robert when he learns that his own mistress, Florence (Greaco again), is fooling around with his former assistant, Claude (Dillman again), the promising lawyer who has decided to defend Eponine. The twisty, suspenseful screenplay was written by none other than long-time 20th Century Fox studio chief Darryl F. Zanuck, using the pseudonym ark anﬁeld. onceived as a vehicle for his own mistress, Greco, Zanuck assigned one of his favorite directors, Richard Fleischer, himself a veteran of many a successful crime story (The Boston Strangler, 10 Rillington Place). In fact, Crack in the Mirror reunites Fleischer, Zanuck, Welles and Dillman from their 1959 true crime classic, Compulsion in which Welles played a thinly veiled version of attorney Clarence Darrow. Filmed in beautiful black and white CinemaScope, a superb 35mm print from the Fox archives will be screened. (JH)

The top! Few made it! Least of all, the main character of this movie. An avowed inspiration for Guy Maddin (My Winnipeg, WFF 2008), this cheapo Winnipegian whatsit comes off like a 1 0s ﬁlm from another dimension. Struggling screenwriter Steven Penny (writer/director John Paisz) has no goal other than to make his magnum opus Crime Wave the greatest color crime ﬁlm of all time.” Perched in an apartment above a suburban family’s garage, he toils by streetlight, churning out overheated beginnings and endings aplenty, but suffers crippling writer’s block when it comes to his stories’ middles. His sole fan is his landlord’s wide-eyed daughter, who rescues his drafts from the trash and encourages him unconditionally. Steven’s discards punctuate the ﬁlm with hilarious would-be beginnings and endings, and things only get more surreal when a mysterious script doctor provides him with the secret key to solving all his middles: “twists.” Equally indebted to the faux innocence of vintage educational ﬁlms and the hyperventilating cognitive leaps of tabloid trash, this one-of-a-kind slice of prairie postmodernism must be seen to be believed. ais went on to direct ﬁlm segments for The Kids in the Hall, which gives a good indication of Crime Wave’s cracked sensibility.(MK)

The Day I Grew Up

As a set designer, Maha specializes in creating worlds that don’t exist. But one day, while preparing a set on a rote melodrama, she turns around, and ﬁnds herself inhabiting it. Her husband and career are gone, replaced with a life as a Cairo housewife and a young child she doesn’t recognize. Just as she starts to get her bearings, Maha slides back into reality—or is it? As Maha continues to oscillate between worlds that occasionally overlap, director Ahmad Abdalla keeps her (and us) guessing as to which is her “real” life. Shot in classic black-and-white, this canny riff on the Hollywood “women’s picture” provides a very modern commentary on the binary roles offered to women, both onscreen and in life. Abdalla’s sensitive, thoughtful portrait of a woman feeling her way through a psychic breakdown has earned critical comparisons to the ﬁlms of ngmar ergman, Fran ois Truffaut, and Woody Allen. (MK)

Join us as we triple up on Wisconsin’s Own documentaries chronicling the unique food, drink, and entertainment experiences that help make this state what it is. Gobble up all there is to know about supper clubs, chug down a pint or two of anecdotes about ew larus’ ﬁnest brew, and take a quick roller coaster ride through one of Wisconsin’s most down-home amusement parks.

A quick guided tour of Little A-Merrick-A, the homegrown amusement park that serves as the pride and joy of Marshall, Wisconsin. Find out what’s behind the spelling of the name, and just what a Wisconsin safari ride entails in Kurt Raether’s heartfelt short. 2015 Golden Badger winner. (BR)

• Old Fashioned: The Story of the Wisconsin Supper Club

• Tale of the Spotted Cow

Wonderfully candid interviews with New Glarus Brewery founders/ owners Deb and Dan Carey fuel this inside look at the legend behind Wisconsin’s signature craft beer, Spotted Cow. Filmmaker Bill Roach has captured endearingly down to earth and detailed anecdotes about the couple’s history both in and out of the brewery, revealing a truelife rags-to-riches tale that is both touching and inspiring. (BR)