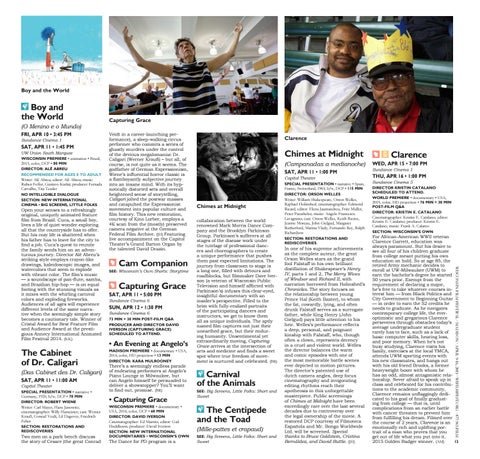 Boy and the World

eidt in a career-launching performance , a sleep-walking circus performer who commits a series of ghastly murders under the control of the devious megalomaniac r. aligari Werner rau but all, of course, is not uite as it seems. he godfather of German Expressionism, Wiene’s inﬂuential horror classic is a ﬂamboyantly sub ective ourney into an insane mind. With its hypnotically distorted sets and overall heightened sense of storytelling, Caligari olted the postwar masses and catapulted the xpressionist movement into popular culture and ﬁlm history. his new restoration, courtesy of ino orber, employs a scan from the mostly preserved camera negative at the erman Federal Film rchive. (JH) Featuring live accompaniment on the apitol heater’s rand arton Organ by the talented avid ra in.

here’s a seemingly endless parade of endearing performers at ngelo’s iano ounge in ilwaukee, but can ngelo himself be persuaded to deliver a showstopper ou’ll want to ﬁnd out, promise. (BR)

Chimes at Midnight (Campanadas a medianoche)

collaboration between the world renowned ark orris ance ompany and the rooklyn arkinson roup. arkinson’s sufferers at all stages of the disease work under the tutelage of professional dancers and choreographers to create a uni ue performance that pushes them past expected limitations. he ourney from classroom to stage is a long one, ﬁlled with detours and roadblocks, but ﬁlmmaker ave verson a veteran of Wisconsin ublic elevision and himself afﬂicted with arkinson’s infuses this clear-eyed, insightful documentary with an insider’s perspective. Filled to the brim with fully-reali ed portraits of the participating dancers and instructors, we get to know them all as uni ue individuals. he aptly named ﬁlm captures not ust their unearthed grace, but their enduring humanity. nsentimental yet extraordinarily moving, Capturing Grace arrives at the intersection of arts and medicine and ﬁnds a sweet spot where true freedom of movement is nurtured and celebrated. (BR)

Carnival of the Animals

n one of his supreme achievements as the complete auteur, the great Orson Welles stars as the grand fool Falstaff in his own brilliant distillation of Shakespeare’s Henry IV, parts 1 and , The Merry Wives of Windsor and Richard II, with narration borrowed from Holinshed’s Chronicles. he story focuses on the relationship between young rince Hal eith axter , to whom the fat, cowardly, lying, and often drunk Falstaff serves as a surrogate father, while ing Henry ohn ielgud pays little attention to his heir. Welles’s performance reﬂects a deep, personal, and poignant kinship with Falstaff, who, though often a clown, represents decency in a cruel and violent world. Welles the director balances the warm and comic episodes with one of the most memorable battle scenes ever depicted in motion pictures. he director’s patented use of dutch camera angles, deep focus cinematography and invigorating editing rhythms reach their apotheosis in this unforgettable masterpiece. ublic screenings of Chimes at Midnight have been exceedingly rare over the last several decades due to controversy over the legal ownership of the movie. restored courtesy of Filmoteca spa ola and r. ongo Worldwide td. will be screened. Special thanks to Bruce Goldstein, Cristina Bernáldez, and David Buttle. (JH)

For frican- merican WW veteran larence arrett, education was always paramount. ut his desire to see all four of his children graduate from college meant putting his own education on hold. So at age , the retired rmy mechanic decides to enroll at W- ilwaukee W to earn the bachelor’s degree he started 0 years prior. xempt from the re uirement of declaring a ma or, he’s free to take whatever courses interest him from lack olitics and ity overnment to eginning uitar in order to earn the credits he needs to graduate. s he navigates contemporary college life, the everoptimistic and gregarious larence perseveres through obstacles today’s average undergraduate student rarely has to face, such as a lack of basic computer skills, hearing loss, and poor memory. When he’s not busy studying, larence visits his family, exercises at the local , attends W sporting events with his new classmates, and hangs out with his old friend rooks, a former heavyweight boxer with whom he has an odd, almost antagonistic relationship. ever afraid to speak up in class and celebrated for his contributions to the academic community, larence remains unﬂaggingly dedicated to his goal of ﬁnally graduating from college that is, until complications from an earlier battle with cancer threaten to prevent him from fulﬁlling his dream. Filmed over the course of years, Clarence is an emotionally rich and uplifting portrait of a man who proves that you get out of life what you put into it. 01 olden adger winner. (AM) 13

Open your senses to a refreshingly original, uniquely animated feature ﬁlm from ra il. uca, a small boy, lives a life of quiet wonder exploring all that the countryside has to offer. ut his co y life is shattered when his father has to leave for the city to ﬁnd a ob. uca’s uest to reunite the family sends him on an adventurous ourney. irector l breu’s striking style employs crayon-like drawings, kaleidoscopic images, and watercolors that seem to explode with vibrant color. he ﬁlm’s music a soundscape of pan-ﬂute, samba, and ra ilian hip-hop is on e ual footing with the stunning visuals as it mixes with the whirling carnival colors and exploding ﬁreworks. udiences of all ages will experience different levels of the same narrative when the seemingly simple story becomes a cautionary tale. Winner of ristal ward for est Feature Film and udience ward at the prestigious nnecy nternational nimated Film Festival 01 . (KK)