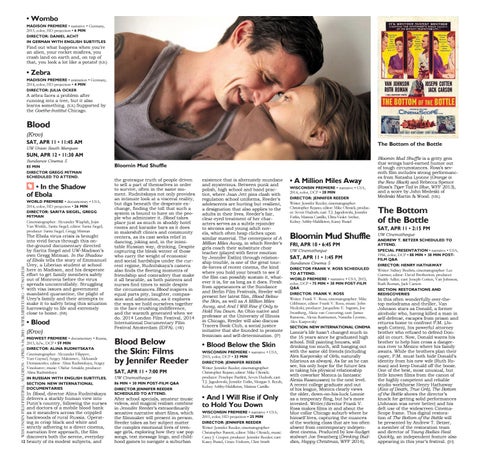 Find out what happens when you’re an alien, your rocket misﬁres, you crash land on earth and, on top of that, you look a lot like a potato! (KK)

A zebra faces a problem after running into a tree, but it also learns something. (KK) Supported by the Goethe-Institut Chicago.

The Bottom of the Bottle

• In the Shadow of Ebola

The Ebola virus crisis is brought into vivid focus through this onthe-ground documentary directed by Sarita Siegel and UW-Madison’s own Gregg Mitman. In the Shadow of Ebola tells the story of Emmanuel Urey, a Liberian student at school here in Madison, and his desperate effort to get family members safely out of Monrovia before the virus spreads uncontrollably. Struggling with visa issues and government mandated quarantine, the plight of Urey’s family and their attempts to make it to safety bring this situation harrowingly to life and extremely close to home. (BR)

In Blood, director Alina Rudnitskaya delivers a starkly human view into Putin’s country, following the nurses and doctors of a mobile blood bank as it meanders across the crippled backwoods of rural Russia. Operating in crisp black and white and strictly adhering to a direct cinema, narration free approach, the ﬁlm discovers both the serene, everyday 12 beauty of its modest subjects, and

Bloomin Mud Shuffle the grotesque truth of people driven to sell a part of themselves in order to survive, often in the same moment. Rudnitskaya not only provides an intimate look at a visceral reality, but digs beneath the desperate exchange, ﬁnding the toll that such a system is bound to have on the people who administer it. Blood takes place just as much in shoddy hotel rooms and karaoke bars as it does in makeshift clinics and community centers, as its cast seeks relief in dancing, joking and, in the inimitable Russian way, drinking. Despite capturing the bleak winter of those who carry the weight of economic and social hardships under the current regime, Rudnitskaya’s camera also ﬁnds the ﬂeeting moments of friendship and comradery that make it all bearable, as both patients and nurses ﬁnd times to smile despite the circumstances. Blood inspires in equal parts pity, laughter, compassion and admiration, as it explores the ways we hold ourselves together in the face crushing indifference, and the warmth generated when we do. 2014 London Film Festival, 2014 International Documentary Film Festival Amsterdam (IDFA). (AW)

After school specials, amateur music videos, and magical realism combine in Jennifer Reeder’s extraordinarily sensitive narrative short ﬁlms, which the ﬁlmmaker will present in person. Reeder takes as her subject matter the complex emotional lives of teenage girls, exploring how they use pop songs, text message lingo, and childhood games to navigate a suburban

existence that is alternately mundane and mysterious. Between punk and polish, high school and band practice, where Joan Jett pins clash with regulation school uniforms, Reeder’s adolescents are hurting but resilient, a designation that also applies to the adults in their lives. Reeder’s fair, clear-eyed treatment of her characters serves as a subtle rejoinder to sitcoms and young adult novels, which often heap cliches upon similar material. The centerpiece of A Million Miles Away, in which Reeder’s girls coach their substitute choir teacher played with ﬁerce emotion by Jennifer Estlin) through relationship trouble, is one of the great tourde-forces of recent cinema, the kind where you hold your breath to see if the ﬁlm can possibly sustain it, whatever it is, for as long as it does. Fresh from appearances at the Sundance and Berlin Film Festivals, Reeder will present her latest ﬁlm, Blood Below the Skin, as well as A Million Miles Away, and And I Will Rise if Only to Hold You Down. An Ohio native and professor at the University of Illinois in Chicago, Reeder will also discuss Tracers Book Club, a social justice initiative that she founded to promote feminism and self-determination. (JP)

• Blood Below the Skin

• And I Will Rise if Only to Hold You Down

• A Million Miles Away

Lonnie’s life hasn’t changed much in the 16 years since he graduated high school. Still painting houses, still drinking too much, still hanging out with the same old friends (including Alex Karpovsky of Girls, naturally hilarious as always). As far as he can see, his only hope for the future lies in taking his physical relationship with coworker Monica (a fantastic Alexia Rasmussen) to the next level. A recent college graduate and out of his league, Monica clearly views the older, down-on-his-luck Lonnie as a temporary ﬂing, but he’s more invested. Writer/director Frank V. oss makes ﬁlms in and about the blue collar Chicago suburb where he himself lives, capturing the nuances of the working class that are too often absent from contemporary independent cinema. Produced by low-budget stalwart Joe Swanberg (Drinking Buddies, Happy Christmas, WFF 2014),

The Bottom of the Bottle

In this often wonderfully over-thetop melodrama and thriller, Van Johnson stars as Donald, a former alcoholic who, having killed a man in self-defense, escapes from prison and returns home to confront P.M. (Joseph Cotten), his powerful attorney brother who refused to defend Donald in court. Now, Donald wants his brother to help him cross a dangerous river to Mexico where his family awaits. While the brothers plan their caper, P.M. must both hide Donald’s identity from his new wife (Ruth Roman) and keep Donald off the booze. One of the best, most unusual, but little known ﬁlms from the canon of the highly competent and reliable studio workhorse Henry Hathaway (Kiss of Death, True Grit), The Bottom of the Bottle shows the director’s knack for getting solid performances (Johnson was never better) and his deft use of the widescreen CinemaScope frame. This digital restoration of The Bottom of the Bottle will be presented by Andrew T. Betzer, a member of the restoration team and director of Young Bodies Heal Quickly, an independent feature also appearing in this year’s festival. (JH)