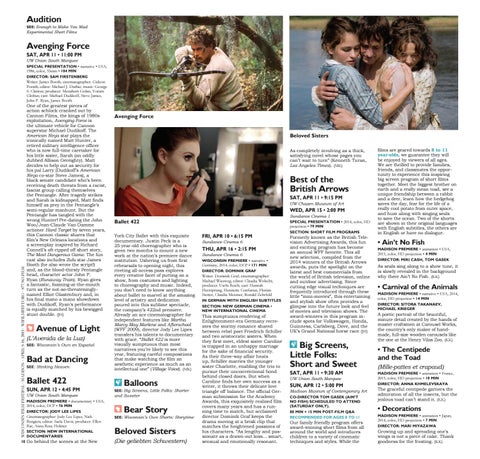 One of the greatest pieces of action schlock cranked out by Cannon Films, the kings of 1980s exploitation, Avenging Force is the ultimate vehicle for Cannon superstar Michael Dudikoff. The American Ninja star plays the ironically named Matt Hunter, a retired military intelligence ofﬁcer who is now full-time caretaker for his little sister, Sarah (an oddly dubbed Allison Gereighty). Matt decides to help out as security for his pal Larry (Dudikoff’s American Ninja co-star Steve James), a black senate candidate who’s been receiving death threats from a racist, fascist group calling themselves the Pentangle. After tragedy strikes and Sarah is kidnapped, att ﬁnds himself as prey in the Pentangle’s semi-regular manhunt. But the Pentangle has tangled with the wrong Hunter! Pre-dating the John Woo/Jean-Claude Van Damme actioner Hard Target by seven years, this Cannon classic shares that ﬁlm’s ew Orleans locations and a screenplay inspired by Richard Connell’s oft-ripped off short story, The Most Dangerous Game. The fun cast also includes Zulu star James Booth (he also wrote the script!) and, as the blood-thirsty Pentangle head, character actor John P. Ryan (Runaway Train). Ryan gives a fantastic, foaming-at-the-mouth turn as the not-so-threateninglynamed Elliot Glastenbury and, in his ﬁnal mano a mano showdown with Dudikoff, Ryan’s performance is equally matched by his bewigged stunt double. (JH)

Ballet 422 York City Ballet with this exquisite documentary. Justin Peck is a 25 year-old choreographer who is given two months to mount a new work at the nation’s premiere dance institution. shering us from ﬁrst rehearsals to opening night, this riveting all-access pass explores every creative facet of putting on a show, from costumes and lighting to choreography and music. Indeed, you don’t need to know anything about ballet to marvel at the amazing level of artistry and dedication poured into this sublime spectacle, the company’s 422nd premiere. Already an ace cinematographer for independent features like Martha Marcy May Marlene and Afterschool (WFF 2009), director Jody Lee Lipes transfers his talents to documentary with grace. “Ballet 422 is more visually sumptuous than most narratives you’re likely to see this year, featuring careful compositions that make watching the ﬁlm an aesthetic experience as much as an intellectual one” (Village Voice). (MK)

o behind the scenes at the

This sumptuous rendering of Enlightenment-era Germany recreates the stormy romance shared between rebel poet Friedrich Schiller and two aristocratic sisters. When they ﬁrst meet, eldest sister aroline is trapped in an unhappy marriage for the sake of ﬁnancial security. As their three-way affair heats up, Schiller marries the younger sister Charlotte, enabling the trio to pursue their unconventional bond behind closed doors. But when aroline ﬁnds her own success as a writer, it throws their delicate love triangle off balance. he ofﬁcial erman submission for the Academy wards, this ex uisitely reali ed ﬁlm covers many years and has a running time to match, but acclaimed director Dominik Graf keeps the drama moving at a brisk clip that matches the heightened passions of his characters. “As lengthy and passionate as a drawn-out kiss… smart, sensual and emotionally resonant.

Formerly known as the British Television Advertising Awards, this fun and exciting program has become an annual WFF favorite. This all new selection, compiled from the 2014 winners of the British Arrows awards, puts the spotlight on the latest and best commercials from the world of British television, online and outdoor advertising. Since cutting edge visual techniques are frequently introduced through these little “mini-movies”, this entertaining and stylish show often provides a glimpse into the future look and feel of movies and television shows. The award-winners in this program include spots for Volkswagen, Honda, Guinness, Carlsberg, Dove, and the ’s rand ational horse race. (JH)

Our family friendly program offers award-winning short ﬁlms from all around the world and introduces children to a variety of cinematic techniques and styles. While the

ﬁlms are geared towards 8 to 11 year-olds, we guarantee they will be enjoyed by viewers of all ages. We are thrilled to provide families, friends, and classmates the opportunity to experience this inspiring big screen program of short ﬁlms together. Meet the biggest brother on earth and a really mean toad, see a unique friendship between a rabbit and a deer, learn how the hedgehog saves the day, fear for the life of a really cool potato from outer space, and hum along with singing seals to save the ocean. Two of the shorts are shown in their original languages with English subtitles, the others are in English or have no dialogue.

As seals sing along to a show tune, it is slowly revealed in the background why there in’t o Fish. (KK)

• Carnival of the Animals

A poetic portrait of the beautiful, minute detail created by the hands of master craftsmen at Carousel Works, the country’s only maker of handmade, full-size wooden carousels like the one at the Henry Vilas Zoo. (KK)

• The Centipede and the Toad (Mille-pattes et crapaud)

The graceful centipede garners the admiration of all the insects, but the jealous toad can’t stand it. (KK)

Growing up and spreading one’s wings is not a piece of cake. Thank goodness for the frosting. (KK)