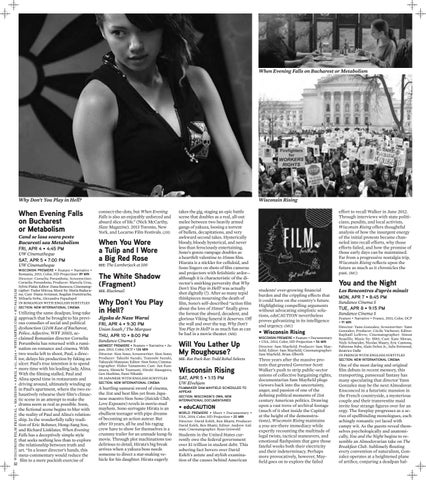 When Evening Falls on Bucharest or Metabolism

Why Don’t You Play in Hell?

Utilizing the same deadpan, long-take approach that he brought to his previous comedies of social and political dysfunction (12:08 East of Bucharest, Police, Adjective, WFF 2010), acclaimed Romanian director Corneliu Porumboiu has returned with a rumination on romance and cinema. With two weeks left to shoot, Paul, a director, delays his production by faking an ulcer. Paul’s true intention is to spend more time with his leading lady, Alina. With the filming stalled, Paul and Alina spend time in restaurants and driving around, ultimately winding up in Paul’s apartment, where the two exhaustively rehearse their film’s climactic scene in an attempt to make the drama seem as real as possible. Soon, the fictional scene begins to blur with the reality of Paul and Alina’s relationship. In the wonderfully talky tradition of Eric Rohmer, Hong-Sang Soo, and Richard Linklater, When Evening Falls has a deceptively simple style that seeks nothing less than to explore the relationship between truth and art. “In a lesser director’s hands, this meta-commentary would reduce the film to a mere puckish exercise of

When You Wore a Tulip and I Wore a Big Red Rose SEE: The Lumberjack at 100

takes the gig, staging an epic battle scene that doubles as a real, all-out melee between two heavily armed gangs of yakuza, loosing a torrent of bullets, decapitations, and very awkward second takes. Hysterically bloody, bloody hysterical, and never less than ferociously entertaining, Sono’s gonzo rampage doubles as a heartfelt valentine to 35mm film. Hiarata is a stickler for celluloid, and Sono lingers on shots of film cameras and projectors with fetishistic ardor— although it is characteristic of the director’s smirking perversity that Why Don’t You Play in Hell? was actually shot digitally (!). After so many tepid thinkpieces mourning the death of film, Sono’s self-described “action film about the love of 35mm” finally gives the format the absurd, decadent, and glorious Viking funeral it deserves. Off the wall and over the top, Why Don’t You Play in Hell? is as much fun as can be had in a movie theater. (MK)

Will You Lather Up My Roughouse?

A hurtling samurai sword of cinema, the 31st and best film yet from Japanese maestro Sion Sono (Suicide Club, Love Exposure) revels in movie-mad mayhem. Sono surrogate Hirata is an ebullient teenager with pipe dreams of becoming an action auteur. But after 10 years, all he and his ragtag crew have to show for themselves is a crummy trailer for an unmade kung-fu movie. Through plot machinations too delirious to detail, Hirata’s big break arrives when a yakuza boss needs someone to direct a star-making vehicle for his daughter. Hirata eagerly

Students in the United States currently owe the federal government over $1 trillion in student debt. This sobering fact hovers over David Esfeh’s astute and stylish examination of the causes behind American

effort to recall Walker in June 2012. Through interviews with state politicians, pundits, and local activists, Wisconsin Rising offers thoughtful analysis of how the insurgent energy of the initial protests became channeled into recall efforts, why those efforts failed, and how the promise of those early days can be maintained. Far from a progressive nostalgia trip, Wisconsin Rising reflects upon the future as much as it chronicles the past. (MC)

You and the Night students’ ever-growing financial burden and the crippling effects that it could have on the country’s future. Highlighting compelling arguments without advocating simplistic solutions, eduCAUTION nevertheless proves galvanizing in its intelligence and urgency. (MC)

Three years after the massive protests that greeted Governor Scott Walker’s push to strip public-sector unions of collective bargaining rights, documentarian Sam Mayfield plugs viewers back into the uncertainty, anger, and passion of one of the defining political moments of 21st century American politics. Drawing upon a vast trove of archival footage (much of it shot inside the Capitol at the height of the demonstrations), Wisconsin Rising maintains a you-are-there immediacy while expertly recounting the multitude of legal twists, tactical maneuvers, and emotional flashpoints that gave those fateful weeks both their electricity and their indeterminacy. Perhaps more provocatively, however, Mayfield goes on to explore the failed

One of the most daring and original film debuts in recent memory, this transporting, pansexual fantasy has many speculating that director Yann Gonzalez may be the next Almodovar. Ensconced in a futuristic mansion in the French countryside, a mysterious couple and their transvestite maid invite four strange figures over for an orgy. The foreplay progresses as a series of spellbinding monologues, each achingly romantic yet laced with campy wit. As the guests reveal themselves psychologically and anatomically, You and the Night begins to resemble an Almodovarian take on The Breakfast Club. Sublimely flouting every convention of naturalism, Gonzalez operates at a heightened plane of artifice, conjuring a deadpan hal-