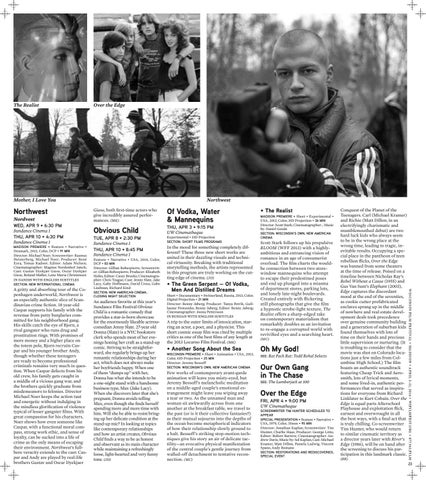 Mother, I Love You

Giese, both first-time actors who give incredibly assured performances. (MK)

An audience favorite at this year’s Sundance Film Festival Obvious Child is a romantic comedy that provides a star-is-born showcase for the enormously likeable actresscomedian Jenny Slate. 27-year old Donna (Slate) is a NYC bookstore clerk who spends most of her evenings honing her craft as a stand-up comic. Striving to be straightforward, she regularly brings up her romantic relationships during her act, which does not always make her boyfriends happy. When one of them “dumps up” with her, Donna has what she intends to be a one-night stand with a handsome business type, Max (Jake Lacy). When she discovers later that she’s pregnant, Donna avoids telling Max, even though she finds herself spending more and more time with him. Will she be able to resist bringing up her delicate condition at the stand-up mic? In looking at topics like contemporary relationships and how an artist creates, Obvious Child finds a way to be as honest and observant as its main character while maintaining a refreshingly loose, light-hearted and very funny tone. (JH)

In the mood for something completely different? These three new short works are united in their dazzling visuals and technical virtuosity. Breaking with traditional storytelling methods, the artists represented in this program are truly working on the cutting edge of cinema. (JH)

• The Green Serpent — Of Vodka, Men And Distilled Dreams

A trip to the outer limits of intoxication, starring an actor, a poet, and a physicist. This short cosmic essay film was cited by multiple critics as one of the best films of any length at the 2013 Locarno Film Festival. (MK)

• Another Song About the Sea

Few works of contemporary avant-garde animation will leave you misty-eyed, but Jeremy Bessoff ’s melancholic meditation on a middle-aged couple’s emotional estrangement might leave you wiping away a tear or two. As the unnamed man and woman sit awkwardly across from one another at the breakfast table, we travel to the past (or is it their collective fantasies?) as their mutual sojourns into the depths of the ocean become metaphorical indicators of how their relationship slowly ground to a halt. Bessoff ’s striking stop-motion techniques give his story an air of delicate tactility—an evocative physical manifestation of the central couple’s gentle journey from walled-off detachment to tentative reconnection. (MC)

Scott Stark follows up his propulsive BLOOM (WFF 2013) with a highlyambitious and entrancing vision of romance in an age of consumerist overload. The film charts the wouldbe connection between two storewindow mannequins who attempt to escape their predestined poses and end up plunged into a miasma of department stores, parking lots, and lonely late-night boulevards. Created entirely with flickering still photographs that give the film a hypnotic strobe-light texture, The Realist offers a sharp-edged take on contemporary materialism that remarkably doubles as an invitation to re-engage a corrupted world with revivified eyes and a searching heart. (MC)

Our Own Gang in The Chase

Conquest of the Planet of the Teenagers. Carl (Michael Kramer) and Richie (Matt Dillon, in an electrifyingly charismatic and mumblemouthed debut) are two hard luck kids who always seem to be in the wrong place at the wrong time, leading to tragic, inevitable results. Occupying a special place in the pantheon of teen rebellion flicks, Over the Edge was banned from some theaters at the time of release. Poised on a timeline between Nicholas Ray’s Rebel Without a Cause (1955) and Gus Van Sant’s Elephant (2003), Edge captures the discordant mood at the end of the seventies, as cookie cutter prefabricated enclaves sprang up in the middle of nowhere and real estate development deals took precedence over genuine community building and a generation of suburban kids found themselves with lots of time on their hands and precious little supervision or nurturing. (It is troubling to consider that the movie was shot on Colorado locations just a few miles from Columbine High School.) The film boasts an authentic soundtrack featuring Cheap Trick and Aerosmith, lots of lyrical moments, and some lived-in, authentic performances that served as inspirations for everyone from Richard Linklater to Kurt Cobain. Over the Edge is equal parts Afterschool Playhouse and exploitation flick, earnest and overwrought in all the best ways, with a final act that is truly chilling. Co-screenwriter Tim Hunter, who would return to similar cinematic territory as a director years later with River’s Edge (1986), will be on hand after the screening to discuss his participation in this landmark classic. (BR)

A gritty and absorbing tour of the Copenhagen underworld, Northwest is an especially authentic slice of Scandinavian crime fiction. 18 year-old Caspar supports his family with the revenue from petty burglaries committed for his neighborhood gang. His skills catch the eye of Bjorn, a rival gangster who runs drug and prostitution rings. With promises of more money and a higher place on the totem pole, Bjorn recruits Caspar and his younger brother Andy, though whether these teenagers are ready to become professional criminals remains very much in question. When Caspar defects from his old crew, his family gets caught in a middle of a vicious gang war, and the brothers quickly graduate from misdemeanors to felonies. Director Michael Noer keeps the action taut and energetic without indulging in the mindless glorification of violence typical of lesser gangster films. With great compassion for his characters, Noer shows how even someone like Caspar, with a functional moral compass, strong work ethic, and sense of loyalty, can be sucked into a life of crime as the only means of escaping their environment. Northwest’s fullbore veracity extends to the cast: Caspar and Andy are played by real-life brothers Gustav and Oscar Dyekjaer