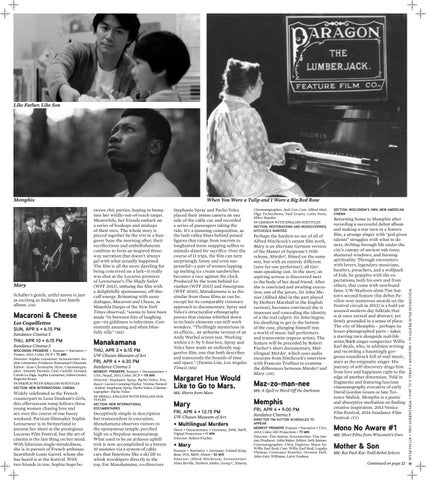 tween chic parties, hoping to bump into her wildly-out-of-reach target. Meanwhile, her friends embark on a series of hookups and mishaps of their own. The whole story is pieced together by the trio in a hungover haze the morning after; their recollections and embellishments combine to form an inspired threeway narration that doesn’t always gel with what actually happened. The film is all the more dazzling for being conceived on a lark—it really was shot at the Locarno premiere of Letourneur’s The Shady Sailor (WFF 2013), imbuing the film with a delightfully spontaneous, off-thecuff energy. Brimming with sassy dialogue, Macaroni and Cheese, as Manohla Dargis of the New York Times observed, “seems to have been made “in between hits of laughing gas—its giddiness is infectious. Consistently amusing and often blissfully silly.” (MK)

Widely celebrated as the French counterpart to Lena Dunham’s Girls, this effervescent romp follows three young women chasing love and sex over the course of one boozy weekend. Parisian filmmaker Sophie Letourneur is in Switzerland to present her short at the prestigious Locarno Film Festival, but the art of cinema is the last thing on her mind. With hilarious single-mindedness, she is in pursuit of French arthouse heartthrob Louis Garrel, whom she has heard is at the festival. With two friends in tow, Sophie hops be-

Deceptively simple in description but transcendent in execution, Manakamana observes visitors to the eponymous temple, perched high on a Nepalese mountaintop. What used to be an arduous uphill trek is now accomplished in a breezy 10 minutes via a system of cable cars that functions like a ski lift to whisk worshipers directly to the top. For Manakamana, co-directors

Stephanie Spray and Pacho Velez placed their 16mm camera on one side of the cable car, and recorded a series of passengers taking the ride. It’s a stunning composition, as the lush valley blurs behind poised figures that range from tourists to longhaired teens snapping selfies to animals slated for sacrifice. Over the course of 11 trips, the film can turn surprisingly funny and even suspenseful—a pair of women lapping up melting ice cream sandwiches becomes a race against the clock. Produced by the team behind Leviathan (WFF 2013) and Sweetgrass (WFF 2010), Manakamana is as dissimilar from these films as can be, except for its comparably visionary approach to documentary. Spray and Velez’s structuralist ethnography proves that cinema whittled down to its basic elements can still work wonders. “Thrillingly mysterious in its effects… an airborne version of an Andy Warhol screen test. Working within a 5- by 5-foot box, Spray and Velez have made an endlessly suggestive film, one that both describes and transcends the bounds of time and space.” (Dennis Lim, Los Angeles Times) (MK)

Margaret Hue Would Like to Go to Mars. SEE: Shorts from Mars

Perhaps the hardest-to-see of all of Alfred Hitchcock’s extant film work, Mary is an alternate German version of the Master of Suspense’s 1930 release, Murder!, filmed on the same sets, but with an entirely different (save for one performer), all German-speaking cast. In the story, an aspiring actress is discovered next to the body of her dead friend. After she is convicted and awaiting execution, one of the jurors, Sir John Menier (Alfred Abel in the part played by Herbert Marshall in the English version), becomes convinced she is innocent and concealing the identity of a the real culprit. Sir John begins his sleuthing to get to the bottom of the case, plunging himself into a world of music hall performers and transvestite trapeze artists. The feature will be preceded by Robert Fischer’s short documentary, Multilingual Murder, which uses audio excerpts from Hitchcock’s interview with Francois Truffaut to examine the differences between Murder! and Mary. (JH)

SEE: A Spell to Ward Off the Darkness

Returning home to Memphis after recording a successful debut album and making a star turn in a feature film, a strange singer with “god given talents” struggles with what to do next, drifting through life under the city’s canopy of ancient oak trees, shattered windows, and burning spirituality. Through encounters with lovers, legendary musicians, hustlers, preachers, and a wolfpack of kids, he grapples with the expectations, both his own and from others, that come with newfound fame. UW-Madison alum Tim Sutton’s second feature (his debut Pavilion won numerous awards on the Festival circuit in 2012) is a bold yet assured modern-day folktale that is at once surreal and abstract, yet firmly grounded in a sense of place. The city of Memphis – perhaps its lesser-photographed parts – takes a starring turn alongside real-life artist/R&amp;B singer-songwriter Willis Earl Beals, who, in addition writing and recording a hauntingly gorgeous soundtrack full of soul music, stars as the enigmatic singer. His journey of self-discovery drags him from love and happiness right to the edge of another dimension. Told in fragments and featuring luscious cinematography evocative of early David Gordon Green or late Terrence Malick, Memphis is a poetic and absorptive mediation on finding creative inspiration. 2013 Venice Film Festival, 2014 Sundance Film Festival. (TY)