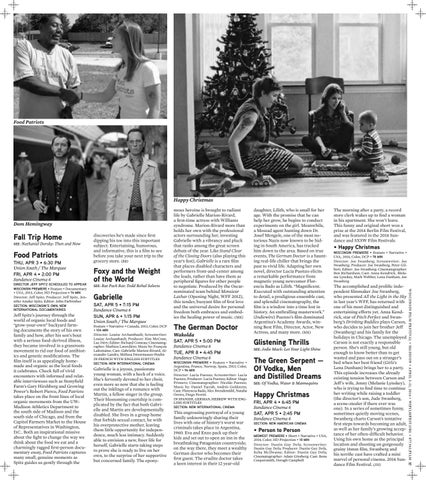 Jeff Spitz’s journey through the world of organic local foods and “grow-your-own” backyard farming documents the story of his own family and how, after his son’s bout with a serious food-derived illness, they became involved in a grassroots movement to rid our food of antibiotics and genetic modifications. The film itself is as appealingly homemade and organic as the local foods it celebrates. Chock full of vivid encounters with informed and relatable interviewees such as Stonyfield Farm’s Gary Hirshberg and Growing Power’s Robert Pierce, Food Patriots takes place on the front lines of local organic movements from the UWMadison Athletics Department to the south side of Madison and the south side of Chicago, and from the Capitol Farmers Market to the House of Representatives in Washington, D.C.. Both an inspirational missive about the fight to change the way we think about the food we eat and a charmingly ragged first-person documentary essay, Food Patriots captures many small, genuine moments as Spitz guides us gently through the

Gabrielle is a joyous, passionate young woman, with a heck of a voice. She’s fervently devoted to her choir, even more so now that she is feeling out the inklings of a romance with Martin, a fellow singer in the group. Their blossoming courtship is complicated by the fact that both Gabrielle and Martin are developmentally disabled. She lives in a group home that forbids sexual contact, he with his overprotective mother, leaving them little opportunity for independence, much less intimacy. Suddenly able to envision a new, freer life for herself, Gabrielle starts taking steps to prove she is ready to live on her own, to the surprise of her supportive but concerned family. The epony-

This engrossing portrayal of a young family unknowingly sharing their lives with one of history’s worst war criminals takes place in Argentina, 1960. Eva and Enzo pack up their kids and set out to open an inn in the breathtaking Patagonian countryside; on the way there, they meet a wealthy German doctor who becomes their first guest. The erudite doctor takes a keen interest in their 12 year-old

daughter, Lilith, who is small for her age. With the promise that he can help her grow, he begins to conduct experiments on the girl. Meanwhile, a Mossad agent hunting down Dr. Josef Mengele, one of the most notorious Nazis now known to be hiding in South America, has tracked him down to the area. Based on true events, The German Doctor is a haunting real-life chiller that brings the past to vivid life. Adapting her own novel, director Lucía Puenzo elicits a remarkable performance from magnetic young newcomer Florencia Bado as Lilith. “Magnificent. Executed with outstanding attention to detail, a prodigious ensemble cast, and splendid cinematography, the film is a window into a time lost in history. An enthralling masterwork.” (Indiewire) Puenzo’s film dominated Argentina’s Academy Awards, winning Best Film, Director, Actor, New Actress, and many more. (MK)

The morning after a party, a record store clerk wakes up to find a woman in his apartment. She won’t leave. This funny and original short won a prize at the 2014 Berlin Film Festival, and was featured in the 2014 Sundance and SXSW Film Festivals.

The accomplished and prolific independent filmmaker Joe Swanberg, who presented All the Light in the Sky in last year’s WFF, has returned with one of his most distinguished and entertaining efforts yet. Anna Kendrick, star of Pitch Perfect and Swanberg’s Drinking Buddies plays Carson, who decides to join her brother Jeff (Swanberg) and his family for the holidays in Chicago. The unemployed Carson is not exactly a responsible person. She’s still young, but old enough to know better than to get wasted and pass out on a stranger’s bed when her best friend (Girls’s Lena Dunham) brings her to a party. This episode increases the already existing tension between Carson and Jeff’s wife, Jenny (Melanie Lynskey), who is trying to find time to continue her writing while raising a toddler (the director’s son, Jude Swanberg, a scene-stealer if there ever was one). In a series of sometimes funny, sometimes quietly moving scenes, Swanberg charts Carson’s tentative first steps towards becoming an adult, as well as her family’s growing acceptance of her often-difficult behavior. Using his own home as the principal location and shooting on gorgeously grainy 16mm film, Swanberg and his terrific cast have crafted a mini marvel of personal cinema. 2014 Sun15 dance Film Festival. (JH)

discoveries he’s made since first dipping his toe into this important subject. Entertaining, humorous, and informative, this is a film to see before you take your next trip to the grocery store. (BR)

mous heroine is brought to radiant life by Gabrielle Marion-Rivard, a first-time actress with Williams syndrome. Marion-Rivard more than holds her own with the professional actors surrounding her, investing Gabrielle with a vibrancy and pluck that ranks among the great screen debuts of the year. Like Stand Clear of the Closing Doors (also playing this year’s fest), Gabrielle is a rare film that places disabled characters and performers front-and-center among the leads, rather than have them as peripheral figures for other people to negotiate. Produced by the Oscarnominated team behind Monsieur Lazhar (Opening Night, WFF 2012), this tender, buoyant film of first love and the universal desire for personal freedom both embraces and embodies the healing power of music. (MK)