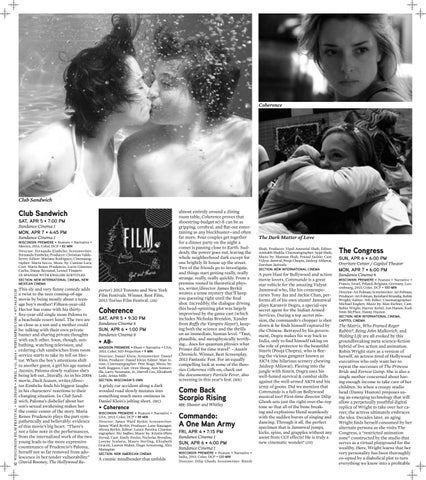 almost entirely around a dining room table, Coherence proves that shoestring-budget sci-fi can be as gripping, cerebral, and flat-out entertaining as any blockbuster—and often far more. Four couples get together for a dinner party on the night a comet is passing close to Earth. Suddenly, the power goes out, leaving the whole neighborhood dark except for one brightly lit house up the street. Two of the friends go to investigate, and things start getting really, really strange, really, really quickly. From a premise rooted in theoretical physics, writer/director James Byrkit weaves a tense mystery that’ll keep you guessing right until the final shot. Incredibly, the dialogue driving this head-spinning plot was largely improvised by the game cast (which includes Nicholas Brendon, Xander from Buffy the Vampire Slayer), keeping both the science and the thrills on an immediate, human level. “Taut, plausible, and metaphysically terrifying… does for quantum physics what Primer did for time travel” – Austin Chronicle. Winner, Best Screenplay, 2013 Fantastic Fest. For an equally compelling look at some of the theories Coherence riffs on, check out the documentary Particle Fever, also screening in this year’s fest. (MK)

A grisly car accident along a dark wooded road slowly mutates into something much more ominous in Daniel Klein’s jolting short. (MC)

Commando: A One Man Army

This sly and very funny comedy adds a twist to the teen coming-of-age movie by being mostly about a teenage boy’s mother! Fifteen-year-old Hector has come with his thirtyfive-year-old single mom Paloma to a beachside resort hotel. The two are as close as a son and a mother could be: talking with their own private banter and sharing private thoughts with each other. Soon, though, sunbathing, watching television, and ordering club sandwiches from room service starts to take its toll on Hector. When the boy’s attentions shift to another guest, a girl his age named Jazmin, Paloma slowly realizes she’s being left out…literally. As in his 2004 movie, Duck Season, writer/director Eimbcke finds his biggest laughs in his characters’ reactions to their changing situation. In Club Sandwich, Paloma’s disbelief about her son’s sexual awakening makes her the comic center of the story. Maria Renee Prudencio plays the part sympathetically and believably: evidence of this movie’s big heart. “There’s not a false note in the performances, from the internalized work of the two young leads to the more expressive countenance of Prudencio’s Paloma, herself not so far removed from adolescence in her tender vulnerability.” 12 (David Rooney, The Hollywood Re-

A cosmic mindbender that unfolds

A pure blast for Bollywood and action movie lovers, Commando is a great star vehicle for the amazing Vidyut Jammwal who, like his contemporaries Tony Jaa and Jackie Chan, performs all of his own stunts! Jammwal plays Karanvir Dogra, a special-ops secret agent for the Indian Armed Services. During a top secret mission, the commando’s chopper is shot down &amp; he finds himself captured by the Chinese. Betrayed by his government, Dogra makes his way back to India, only to find himself taking on the role of protector to the beautiful Simrit (Pooja Chopra), who is fleeing the vicious gangster known as AK74 (the hilarious scenery chewing Jaideep Ahlawat). Fleeing into the jungle with Simrit, Dogra uses his well-honed survival &amp; combat skills against the well-armed AK74 and his army of goons. Did we mention that Commando is a full-on Bollywood musical too? First-time director Dilip Ghosh sets just the right over-the-top tone so that all of the bone breaking and explosions blend seamlessly with the sudden bursts of singing and dancing. Through it all, the perfect specimen that is Jammwal jumps, kicks, spins, and grapples without any assist from CGI effects! He is truly a new cinematic wonder! (JH)

The Matrix, Who Framed Roger Rabbit?, Being John Malkovich, and Waking Life are all evoked by this groundbreaking meta science-fiction hybrid of live action and animation. Robin Wright stars as a version of herself, an actress tired of Hollywood executives who only want her to repeat the successes of The Princess Bride and Forrest Gump. She is also a single mother concerned about having enough income to take care of her children. So when a creepy studio head (Danny Huston) proposes using an emerging technology that will allow a perpetually youthful digital replica of Wright to take over her career, the actress ultimately embraces the idea. Decades later, an aging Wright finds herself consumed by her alternate persona as she visits The Congress, a “restricted animation zone” constructed by the studio that serves as a virtual playground for the wealthy. Here, Wright learns that her very personality has been thoroughly co-opted by a diabolical plot to turn everything we know into a profitable