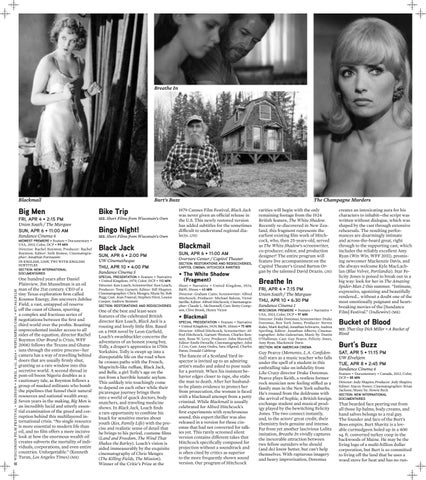 One hundred years after Daniel Plainview, Jim Musselman is an oil man of the 21st century. CEO of a tiny Texas exploration firm called Kosmos Energy, Jim uncovers Jubilee Field, a vast, untapped oil reserve off the coast of Ghana, spurring a complex and fractious series of negotiations between the first and third world over the profits. Boasting unprecedented insider access to all sides of the equation, director Rachel Boynton (Our Brand is Crisis, WFF 2006) follows the Texans and Ghanaians through the entire process—her camera has a way of travelling behind doors that are usually firmly shut, granting us a rare window into this secretive world. A second thread in post-oil boom Nigeria doubles as a cautionary tale, as Boynton follows a group of masked militants who bomb the pipelines that funnel their natural resources and national wealth away. Seven years in the making, Big Men is an incredibly lucid and utterly essential examination of the greed and corruption behind this multilayered international crisis. “No single resource is more essential to modern life than oil, and no film offers a more incisive look at how the enormous wealth oil creates subverts the mortality of individuals, corporations, and even entire countries. Unforgettable.” (Kenneth Turan, Los Angeles Times) (MK)

1979 Cannes Film Festival, Black Jack was never given an official release in the U.S. This newly restored version has added subtitles for the sometimes difficult to understand regional dialects. (JH)

One of the best and least-seen features of the celebrated British director Ken Loach, Black Jack is a rousing and lovely little film. Based on a 1968 novel by Leon Garfield, Loach’s swashbuckler concerns the adventures of an honest young boy, Tolly, a draper’s apprentice in 1750s Yorkshire. Tolly is swept up into a disreputable life on the road when he crosses paths with the French, Magwitch-like ruffian, Black Jack, and Belle, a girl Tolly’s age on the run from a horrible lunatic asylum. This unlikely trio touchingly come to depend on each other while their picaresque journey brings them into a world of quack doctors, body snatchers, and traveling medicine shows. In Black Jack, Loach finds a rare opportunity to combine his knack for sensitive stories about youth (Kes, Family Life) with the precise and realistic sense of detail that he brings to his period, costume films (Land and Freedom, The Wind That Shakes the Barley). Loach’s vision is aided immeasurably by the exquisite cinematography of Chris Menges (The Killing Fields, The Mission). Winner of the Critic’s Prize at the

The fiancée of a Scotland Yard inspector is invited up to an admiring artist’s studio and asked to pose nude for a portrait. When his insistent behavior edges closer to rape, she stabs the man to death. After her husbandto-be plants evidence to protect her from prosecution, the woman is faced with a blackmail attempt from a petty criminal. While Blackmail is usually celebrated for Alfred Hitchcock’s first experiments with synchronous sound, this expert thriller was also released in a version for those cinemas that had not converted for talkies yet. This rarely screened silent version contains different takes that Hitchcock specifically composed for projection without a soundtrack and is often cited by critics as superior to the more frequently shown sound version. Our program of Hitchcock

The Champagne Murders rarities will begin with the only remaining footage from the 1924 British feature, The White Shadow. Recently re-discovered in New Zealand, this fragment represents the earliest existing film work of Hitchcock, who, then 25-years-old, served as The White Shadow’s screenwriter, co-producer, editor, and production designer! The entire program will feature live accompaniment on the Capitol Theater’s Grand Barton Organ by the talented David Drazin. (JH)

Guy Pearce (Memento, L.A. Confidential) stars as a music teacher who falls under the spell of a student in this enthralling take on infidelity from Like Crazy director Drake Doremus. Pearce plays Keith, a restless former rock musician now feeling stifled as a family man in the New York suburbs. He’s roused from the doldrums with the arrival of Sophie, a British foreign exchange student and musical prodigy played by the bewitching Felicity Jones. The two connect instantly, and, to the actors’ great credit, their chemistry feels genuine and intense. Far from yet another lascivious Lolita imitation, Breathe In vividly captures the inexorable attraction between two fellow outsiders who should (and do) know better, but can’t help themselves. With rapturous imagery and heavy improvisation, Doremus

creates an intoxicating aura for his characters to inhabit—the script was written without dialogue, which was shaped by the cast through extensive rehearsals. The resulting performances are disarmingly intimate and across-the-board great, right through to the supporting cast, which includes the reliably excellent Amy Ryan (Win Win, WFF 2011), promising newcomer Mackenzie Davis, and the always welcome Kyle MacLachlan (Blue Velvet, Portlandia). Star Felicity Jones is poised to break out in a big way: look for her in The Amazing Spider-Man 2 this summer. “Intimate, expressive, agonizing and beautifully rendered… without a doubt one of the most emotionally poignant and heartbreaking movies of the [Sundance Film] Festival.” (Indiewire) (MK)

SEE: That Guy Dick Miller + A Bucket of Blood

That bearded face peering out from all those lip balms, body creams, and hand salves belongs to a real guy. The founder and face of the Burt’s Bees empire, Burt Shavitz is a lovable curmudgeon holed up in a 400 sq. ft. converted turkey coop in the backwoods of Maine. He may be the living logo of a multi-billion dollar corporation, but Burt is so committed to living off the land that he uses a wood stove for heat and has no run-