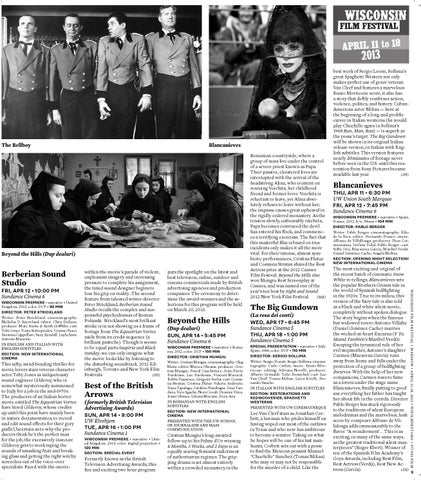 Beyond the Hills (Dup dealuri)

This nifty, mind-bending thriller for movie lovers stars veteran character actor Toby Jones as milquetoasty sound engineer Gilderoy, who is somewhat mysteriously summoned to Italy for a job in the mid-1970s. The producers of an Italian horror movie entitled The Equestrian Vortex have hired Gilderoy, whose credits up until this point have mainly been in nature documentaries, to record and edit sound effects for their gory giallo.Uncertain as to why the producers think he’s the perfect man for the job, the excessively insecure Gilderoy gets to work taping the sounds of smashing fruit and breaking glass and getting the right witchy screeches out of the voice-over specialists. Faced with the-movie-

puts the spotlight on the latest and best television, online, outdoor and cinema commercials made by British advertising agencies and production companies. The ceremony to determine the award-winners and the selections for this program will be held on March 20, 2013.

Cristian Mungiu’s long-awaited follow-up to his Palme d’Or winning 4 Months, 3 Weeks, and 2 Days is an equally searing feminist indictment of authoritarian regimes. The gripping drama is set almost entirely within a crowded monastery in the

Lee Van Cleef stars as Jonathan Corbett, a lawman who prides himself on having wiped out most of the outlaws in Texas and who now has ambitions to become a senator. Taking on what he hopes will be one of his last manhunts, Corbett sets out with a posse to ﬁnd the Mexican peasant Manuel “Chuchillo” Sanchez (Tomas Milian) who may or may not be responsible for the murder of a child. Like the

The most exciting and original of the recent batch of cinematic Snow White re-tellings, Blancanieves sets the popular Brothers Grimm tale in the world of Spanish bullﬁghting in the 1920s. True to its milieu, this version of the fairy tale is also told as a black and white silent movie, completely without spoken dialogue. The story begins when the famous but widowed torero Antonio Villalta (Daniel Giménez Cacho) marries the wicked-at-heart Encarna (Y Tu Mamá También’s Maribel Verdú). Escaping the tyrannical rule of her evil stepmother, Antonio’s daughter Carmen (Macarena García) runs away from home and falls under the protection of a group of bullﬁghting dwarves. With the help of her new companions, Carmen rises to fame as a torera under the stage name Blancanieves, ﬁnally putting to good use everything her father has taught her about life in the corrida. Director Pablo Berger has stuck rigorously to the traditions of silent European melodramas and the marvelous, lush score by composer Alfonso de Villalonga adds immeasurably to the ﬂavor. “A wonderment!… This is as exciting, in many of the same ways, as the greatest traditional silent masterpieces” (Roger Ebert). Winner of ten of the Spanish Film Academy’s Goya Awards, including Best Film, Best Actress (Verdú), Best New Actress (García). (JH)

within-the-movie’s parade of violent, unpleasant imagery and increasing pressure to complete his assignment, the timid sound designer begins to lose his grip on reality…The second feature from talented writer-director Peter Strickland, Berberian Sound Studio recalls the complex and suspenseful psychodramas of Roman Polanski. Strickland’s most brilliant stroke is in not showing us a frame of footage from The Equestrian Vortex aside from its credit sequence (a brilliant pastiche). Though it seems to be equal parts Suspiria and Black Sunday, we can only imagine what the movie looks like by listening to the disturbing soundtrack. 2012 Edinburgh, Toronto and New York Film Festivals. (JH)

Romanian countryside, where a group of nuns live under the control of a severe priest known as Papa. Their passive, cloistered lives are interrupted with the arrival of the headstrong Alina, who is intent on rescuing Voichita, her childhood friend and former lover. Voichita is reluctant to leave, yet Alina absolutely refuses to leave without her; the impasse causes great upheaval in the rigidly ordered monastery. As the tension slowly, unbearably ratchets, Papa becomes convinced the devil has entered his ﬂock, and commences a terrifying exorcism. The fact that this masterful ﬁlm is based on true incidents only makes it all the more vital. For their intense, almost symbiotic performances, Cristina Flutur and Cosmina Stratan shared the Best Actress prize at the 2012 Cannes Film Festival. Beyond the Hills also won Mungiu Best Screenplay at Cannes, and was named one of the year’s ten best by Sight and Sound. 2012 New York Film Festival. (MK)

best work of Sergio Leone, Sollima’s great Spaghetti Western not only makes perfect use of genre veteran Van Cleef and features a marvelous Ennio Morricone score, it also has a story that deftly combines action, violence, politics, and history. CubanAmerican actor Milian — here at the beginning of a long and proliﬁc career in Italian westerns (he would play Chuchillo again in Sollima’s 1968 Run, Man, Run) — is superb as the posse’s target. The Big Gundown will be shown in its original Italian release version, in Italian with English subtitles. This version features nearly 20 minutes of footage never before seen in the U.S. until this restoration from Sony Pictures became available last year. (JH)