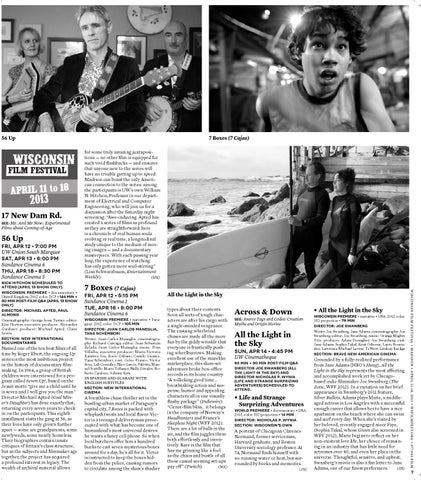 17 New Dam Rd. SEE: Me. And Me Now.: Experimental Films about Coming-of-Age

Named one of the ten best ﬁlms of all time by Roger Ebert, the ongoing Up series is the most ambitious project in the history of documentary ﬁlmmaking. In 1964, a group of British children were interviewed for a program called Seven Up!, based on the Jesuit motto “give me a child until he is seven and I will give you the man.” Director Michael Apted (Coal Miner’s Daughter) has done exactly that, returning every seven years to check in on the participants. This eighth installment visits the gang at 56, as their lives have only grown further apart — some are grandparents, some newlyweds, some nearly homeless. Their biographies contain innate critiques of Britain’s class structure, but as the subjects and ﬁlmmaker age together, the project has acquired a profound interest in legacy. The wealth of archival material allows

for some truly amazing juxtapositions — no other ﬁlm is equipped for such vivid ﬂashbacks — and ensures that anyone new to the series will have no trouble getting up to speed. Madison can boast the only American connection to the series: among the participants is UW’s own William N. Hitchon, Professor in our department of Electrical and Computer Engineering, who will join us for a discussion after the Saturday night screening. “Awe-inducing. Apted has created a series of ﬁlms as profound as they are straightforward: here is a chronicle of real human souls evolving in real time, a longitudinal study unique to the medium of moving images — and a documentary masterpiece. With each passing year leap, the experience of watching has only gotten more soul-stirring” (Lisa Schwarzbaum, Entertainment Weekly). (MK)

A breathless chase thriller set in the bustling urban market of Paraguay’s capital city, 7 Boxes is packed with whiplash twists and local ﬂavor. Victor is a teenaged deliveryman preoccupied with what has become one of humankind’s most universal desires: he wants a fancy cell phone. So when local butchers offer him a hundred bucks to cart seven mysterious boxes around for a day, he’s all for it. Victor is instructed to keep the boxes hidden from the police, causing rumors to circulate among the slum’s shadier

All the Light in the Sky types about their contents. Soon all sorts of tough characters are after his cargo with a single-minded vengeance. The ensuing whirlwind chases are made all the more fun by the giddy wrinkle that everyone is frantically pushing wheelbarrows. Making excellent use of the mazelike marketplace, this slum-set adventure broke box-ofﬁce records in its home country. “A rollicking good time… breathtaking action and suspense, humor and appealing characters all in one visually ﬂashy package” (Indiewire). “Genre-ﬁlm bliss… it belongs in the company of Norway’s Headhunters and France’s Sleepless Night (WFF 2012). There are a lot of balls in the air, and the ﬁlm juggles them both effortlessly and inventively. Rare is the ﬁlm that has me grinning like a fool as the chaos and bustle of all those casual seeming set-ups pay off” (Twitch). (MK)

• All the Light in the Sky

Across &amp; Down SEE: Source Tags and Codes: Creation

A portrait of Chicagoan Clarence Normand, former serviceman, Harvard graduate, and Boston University sociology professor. At 74, Normand ﬁnds himself with no running water or heat, but surrounded by books and memories. (JH)

Grounded by a fully-realized performance from Jane Adams (HBO’s Hung), All the Light in the Sky represents the most affecting and accomplished work yet by Chicagobased indie ﬁlmmaker Joe Swanberg (The Zone, WFF 2012). In a variation on her brief appearance in Swanberg’s 2011 feature, Silver Bullets, Adams plays Marie, a middleaged actress in Los Angeles with a successful enough career that allows her to have a nice apartment on the beach where she can swim and surf every day. When she’s visited by her beloved, recently engaged niece Faye, (Sophia Takal, whose Green also screened in WFF 2012), Marie begins to reﬂect on her non-existent love life, her choice of remaining in an industry that has little need for actresses over 40, and even her place in the universe. Thoughtful, sensitve, and upbeat, Swanberg’s movie is also a fan letter to Jane Adams, one of our ﬁnest performers. (JH)