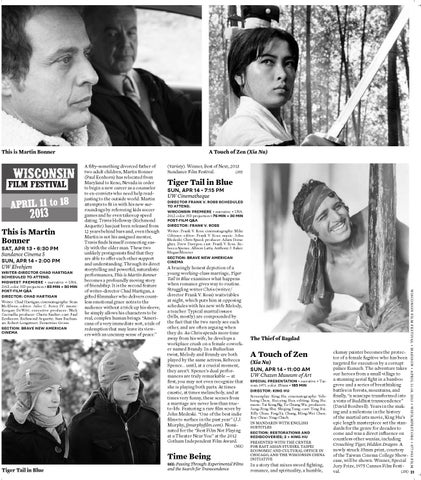 This is Martin Bonner

A ﬁfty-something divorced father of two adult children, Martin Bonner (Paul Eenhorn) has relocated from Maryland to Reno, Nevada in order to begin a new career as a counselor to ex-convicts who need help readjusting to the outside world. Martin attempts to ﬁt in with his new surroundings by refereeing kids soccer games and he even takes up speed dating. Travis Holloway (Richmond Arquette) has just been released from 12 years behind bars and, even though Martin is not his assigned mentor, Travis ﬁnds himself connecting easily with the older man. These two unlikely protagonists ﬁnd that they are able to offer each other support and understanding. Through its direct storytelling and powerful, naturalistic performances, This is Martin Bonner becomes a profoundly moving story of friendship. It is the second feature of writer-director Chad Hartigan, a gifted ﬁlmmaker who delivers countless emotional grace notes to the audience without a trick up his sleeve; he simply allows his characters to be real, complex human beings. “Americana of a very immediate sort, a tale of redemption that may leave its viewers with an uncanny sense of peace.”

A bracingly honest depiction of a young working-class marriage, Tiger Tail in Blue examines what happens when romance gives way to routine. Struggling writer Chris (writer/ director Frank V. Ross) waits tables at night, which puts him at opposing schedules with his new wife Melody, a teacher. Typical marital issues (bills, mostly) are compounded by the fact that the two rarely see each other, and are often arguing when they do. As Chris spends more time away from his wife, he develops a workplace crush on a female coworker named Brandy. In a Buñuelian twist, Melody and Brandy are both played by the same actress, Rebecca Spence… until, at a crucial moment, they aren’t. Spence’s dual performances are truly remarkable — at ﬁrst, you may not even recognize that she is playing both parts. At times caustic, at times melancholy, and at times very funny, these scenes from a marriage are never less than trueto-life. Featuring a rare ﬁlm score by John Medeski. “One of the best indie ﬁlms to surface in the past year” (J.J. Murphy, jjmurphyﬁlm.com). Nominated for the “Best Film Not Playing at a Theater Near You” at the 2012 Gotham Independent Film Award. (MK)

Time Being Tiger Tail in Blue

SEE: Passing Through: Experimental Films and the Search for Transcendence

The Thief of Bagdad

In a story that mixes sword ﬁghting, romance, and spirituality, a humble,

clumsy painter becomes the protector of a female fugitive who has been targeted for execution by a corrupt palace Eunuch. The adventure takes our heroes from a small village to a stunning aerial ﬁght in a bamboo grove and a series of breathtaking battles in forests, mountains, and ﬁnally, “a seascape transformed into a vista of Buddhist transcendence” (David Bordwell). Years in the making and a milestone in the history of the martial arts movie, King Hu’s epic length masterpiece set the standards for the genre for decades to come and was a direct inﬂuence on countless other wuxias, including Crouching Tiger, Hidden Dragon. A newly struck 35mm print, courtesy of the Taiwan Cinema College Showcase, will be shown. Winner, Special Jury Prize, 1975 Cannes Film Festival. (JH) 31