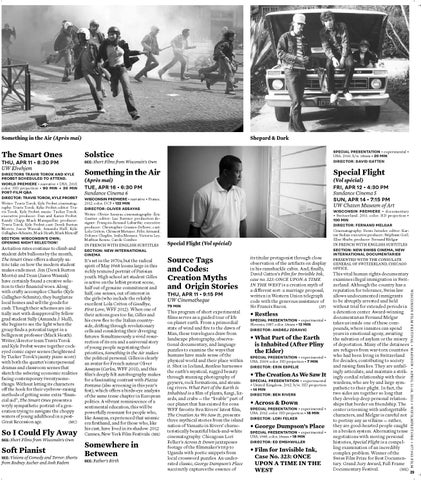 Something in the Air (Après mai)

Something in the Air

So I Could Fly Away SEE: Short Films from Wisconsin’s Own

It’s set in the 1970s, but the radical spirit of May 1968 looms large in this richly textured portrait of Parisian youth. High school art student Gilles is active on the leftist protest scene, half out of genuine commitment and half, one senses, out of interest in the girls (who include the reliably excellent Lola Créton of Goodbye, First Love, WFF 2012). When one of their actions goes too far, Gilles and his crew ﬂee to the Italian countryside, drifting through revolutionary cells and considering their diverging futures. Simultaneously a vivid resurrection of its era and a universal story of young people negotiating their priorities, Something in the Air makes the political personal. Gilles is clearly an avatar for French auteur Oliver Assayas (Carlos, WFF 2011), and this ﬁlm’s deeply felt autobiography makes for a fascinating contrast with Piazza Fontana (also screening in this year’s fest), which offers a birds-eye analysis of the same tense chapter in European politics. A vibrant reminiscence of a sentimental education, this will be powerfully resonant for people who, like Assayas, experienced that seismic era ﬁrsthand, and for those who, like his cast, have lived in its shadow. 2012 Cannes, New York Film Festivals. (MK)

Somewhere in Between SEE: Father’s Birth

This program of short experimental ﬁlms serves as a guided tour of life on planet earth. From a primordial state of wind and ﬁre to the dawn of Man, these travelogues draw from landscape photography, observational documentary, and language puzzles to examine the ways that humans have made sense of the physical world and their place within it. Shot in Iceland, Restless harnesses the earth’s mystical, rugged beauty through stunning photography of geysers, rock formations, and steaming rivers. What Part of the Earth Is Inhabited is a ﬁlm of plants, fungi, lizards, and crabs — the “livable” part of our planet that has existed for eons. WFF favorite Ben Rivers’ latest ﬁlm, The Creation As We Saw It, presents three mythical stories from the island nation of Vanuatu in Rivers’ characteristically beautiful black-and-white cinematography. Chicagoan Lori Felker’s Across &amp; Down juxtaposes footage of the ﬁlmmaker’s trip to Uganda with poetic snippets from local crossword puzzles. An underrated classic, George Dumpson’s Place succinctly captures the essence of

its titular protagonist through close observation of the artifacts on display in his ramshackle cabin. And, ﬁnally, David Gatten’s Film for Invisible Ink, case no. 323: ONCE UPON A TIME IN THE WEST is a creation myth of a different sort: a marriage proposal, written in Western Union telegraph code with the generous assistance of Sir Francis Bacon. (JP)

This vital human rights documentary examines illegal immigration in Switzerland. Although the country has a reputation for tolerance, Swiss law allows undocumented immigrants to be abruptly arrested and held without trial for extended periods in a detention center. Award-winning documentarian Fernand Melgar takes us inside one of these compounds, where inmates can spend years in emotional agony, awaiting the salvation of asylum or the misery of deportation. Many of the detainees are refugees from war-torn countries who had been living in Switzerland for decades, contributing to society and raising families. They are unfailingly articulate, and maintain a strikingly cordial relationship with their wardens, who are by and large sympathetic to their plight. In fact, the two sides are together so long that they develop deep personal relationships that border on friendship. The center is teeming with unforgettable characters, and Melgar is careful not to portray any as villains — rather, they are good-hearted people caught in a broken system. Alternating tense negotiations with moving personal histories, Special Flight is a compelling examination of an incredibly complex problem. Winner of the Swiss Film Prize for Best Documentary. Grand Jury Award, Full Frame Documentary Festival. (MK)

As tuition rates continue to climb and student debt balloons by the month, The Smart Ones offers a sharply satiric take on how the modern student makes ends meet. Jim (Derek Burton Morris) and Dean (Jason Waszak) have certainly found a creative solution to their ﬁnancial woes. Along with crafty accomplice Charlie (Kyle Gallagher-Schmitz), they burglarize local homes and sell the goods for cash. Though their schemes are initially met with disapproval by fellow grad student Sally (Amanda J. Hull), she begins to see the light when the group ﬁnds a potential target in a belligerent professor (Mack Heath). Writer/director team Travis Torok and Kyle Probst weave together cockeyed comic caper scenes (heightened by Tucker Torok’s jaunty piano score) with both the quartet’s interpersonal dramas and classroom scenes that sketch the sobering economic realities facing contemporary twentysomethings. Without letting its characters off the hook for their eyebrow-raising methods of getting some extra “ﬁnancial aid”, The Smart Ones presents a wryly sympathetic portrait of a generation trying to navigate the choppy waters of young adulthood in a postGreat Recession age. (MC)