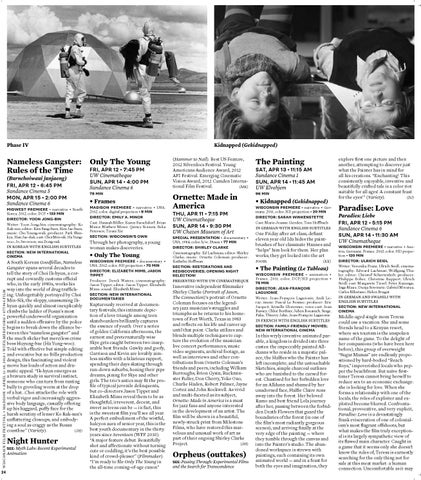 A South Korean Goodfellas, Nameless Gangster spans several decades to tell the story of Choi Ik-hyun, a corrupt and cowardly customs ofﬁcial who, in the early 1980s, works his way into the world of drug trafﬁcking. Unforgettably portrayed by Choi Min-Sik, the sloppy, unassuming Ikhyun quickly and almost inexplicably climbs the ladder of Pusan’s most powerful underworld organization until a sudden offensive by the police begins to break down the alliance between this “nameless gangster” and the much slicker but merciless crime boss Huyung-bae (Ha Yung-woo). Told with effective but simple editing and evocative but no frills production design, this fascinating and violent movie has loads of action and dramatic appeal. “Ik-hyun emerges as a bravura study in survival instinct, someone who can turn from ranting bully to groveling worm at the drop of a hat…Choi attacks the role with verbal vigor and increasingly aggressive body language, casually offering up his haggard, puffy face for the harsh scrutiny of lenser Ko Rak-sun’s unﬂattering closeups, and embodying a soul as craggy as the Busan coastline” (Variety). (JH)

Through her photography, a young woman makes discoveries.

Rapturously received at documentary festivals, this intimate depiction of a love triangle among teen skateboarders brilliantly captures the essence of youth. Over a series of golden California afternoons, the earnest and preternaturally wise Skye gets caught between two inseparable best friends. Gawky and goofy, Garrison and Kevin are lovably aimless misﬁts with a hilarious rapport, spending their days skating through run-down suburbs, honing their pipe dreams, pining for Skye and other girls. The trio’s antics may ﬁt the proﬁle of typical juvenile delinquents, but co-directors Jason Tippet and Elizabeth Mims reveal them to be as thoughtful, irreverent, decent, and sweet as teens can be — in fact, this is the sweetest ﬁlm you’ll see all year. A perfect embodiment of the wistful, halcyon aura of senior year, this is the best youth documentary in the thirty years since Seventeen (WFF 2010). “A major feature debut. Beautifully shot and affectionate without turning cute or coddling, it’s the best possible kind of crowd-pleaser” (Filmmaker). “I’m ready to ﬁle Only The Young in the all-time coming-of-age canon”

Innovative independent ﬁlmmaker Shirley Clarke (Portrait of Jason, The Connection)’s portrait of Ornette Coleman focuses on the legendary jazz musician’s struggles and triumphs as he returns to his hometown of Fort Worth, Texas in 1983 and reﬂects on his life and career up until that point. Clarke utilizes and blends multiple techniques to capture the evolution of the musician: live concert performances, music video segments, archival footage, as well as interviews and other contributions from Ornette Coleman’s friends and peers, including William Burroughs, Brion Gysin, Buckminster Fuller, Don Cherry, Yoko Ono, Charlie Haden, Robert Palmer, Jayne Cortez and John Rockwell. As vivid and multi-faceted as its subject, Ornette: Made in America is a must for jazz fans and anyone interested in the development of an artist. The ﬁlm will be shown in a beautiful, newly-struck print from Milestone Films, who have restored this marvelous and unusual work of art as part of their ongoing Shirley Clarke Project. (JH)

Orpheus (outtakes) SEE: Passing Through: Experimental Films and the Search for Transcendence

One Friday after art class, deﬁant eleven year old Ida hides the paintbrushes of her classmate Hannes and “helps” him look for them. Her plan works; they get locked into the art room. (KK)

In this wryly inventive animated parable, a kingdom is divided into three castes: the impeccably painted Alldunns who reside in a majestic palace; the Halﬁes who the Painter has left incomplete; and the untouchable Sketchies, simple charcoal outlines who are banished to the cursed forest. Chastised for her forbidden love for an Alldunn and shamed by her unadorned face, Halﬁe Claire runs away into the forest. Her beloved Ramo and best friend Lola journey after her, passing between the forbidden Death Flowers that guard the boundaries of the forest (in one of the ﬁlm’s most radiantly gorgeous scenes), and arriving ﬁnally at the very edge of the painting — where they tumble through the canvas and into the Painter’s studio. The abandoned workspace is strewn with paintings, each containing its own animated world — and in a feast for both the eyes and imagination, they

explore ﬁrst one picture and then another, attempting to discover just what the Painter has in mind for all his creations. “Enchanting! This consistently enjoyable, inventive and beautifully crafted tale is a color riot suitable for all ages! A constant feast for the eyes!” (Variety). (DJ)

Middle-aged single mom Teresa could use a vacation. She and some friends head to a Kenyan resort, where sex tourism is the unspoken name of the game. To the delight of her companions (who have been here before), this group of overweight “Sugar Mamas” are endlessly propositioned by hard-bodied “Beach Boys,” impoverished locals who pepper the beachfront. But naïve ﬁrsttimer Teresa cannot bring herself to reduce sex to an economic exchange: she is looking for love. When she forms a relationship with one of the locals, the roles of exploiter and exploited become blurred. Confrontational, provocative, and very explicit, Paradise: Love is a devastatingly frank evisceration of one of colonialism’s most ﬂagrant offshoots, but what makes the ﬁlm truly exceptional is its largely sympathetic view of its ﬂawed main character. Caught in a game that it seems only she doesn’t know the rules of, Teresa is earnestly searching for the only thing not for sale at this meat market: a human connection. Uncomfortable as it may