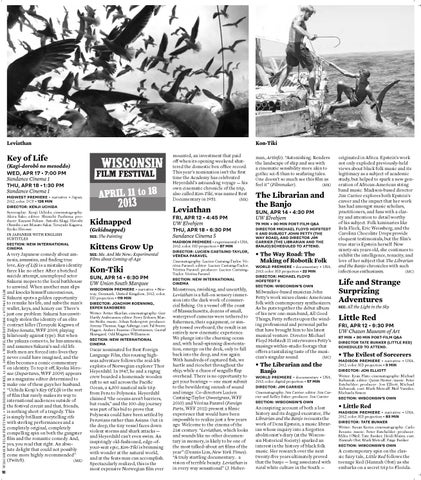 Kon-Tiki mounted, an investment that paid off when its opening weekend shattered the domestic box ofﬁce record. This year’s nomination isn’t the ﬁrst time the Academy has celebrated Heyerdahl’s astounding voyage — his own cinematic chronicle of the trip, also called Kon-Tiki, was named Best Documentary in 1951. (MK)

A very Japanese comedy about amnesia, assassins, and ﬁnding true love, Key of Life is a mistaken identity farce like no other. After a botched suicide attempt, unemployed actor Sakurai mopes to the local bathhouse to unwind. When another man slips and knocks himself unconscious, Sakurai spots a golden opportunity to remake his life, and nabs the man’s wallet, keys, and luxury car. There’s just one problem: Sakurai has unwittingly stolen the identity of an elite contract killer (Teruyuki Kagawa of Tokyo Sonata, WFF 2009, playing hilariously against type). But when the yakuza comes to, he has amnesia, and assumes Sakurai’s sad old life. Both men are forced into lives they never could have imagined, and the ﬁlm becomes a comic commentary on identity. To top it off, Ryoku Hirosue (Departures, WFF 2009) appears as a magazine editor determined to make one of these guys her husband. “Uchida Kenji’s Key Of Life is the sort of ﬁlm that rarely makes its way to international audiences outside of the festival circuit and that, friends, is nothing short of a tragedy. This is simply brilliant storytelling rife with sterling performances and a completely original, completely compelling spin on both the gangster ﬁlm and the romantic comedy. And, yes, you read that right. An absolute delight that could not possibly come more highly recommended” (Twitch). (MK)

Kittens Grow Up SEE: Me. And Me Now.: Experimental Films about Coming-of-Age

Oscar nominated for Best Foreign Language Film, this rousing highseas adventure follows the real-life exploits of Norwegian explorer Thor Heyerdahl. In 1947, he and a ragtag crew boarded a homemade wooden raft to set sail across the Paciﬁc Ocean, a 4,300 nautical mile trip from Peru to Polynesia. Heyerdahl claimed “the oceans aren’t barriers, but roads,” and the 100-day journey was part of his bid to prove that Polynesia could have been settled by Peruvians rather than Asians. Out in the deep, the tiny vessel faces down violent storms and shark attacks — and Heyerdahl can’t even swim. An inspiringly old-fashioned, edge-ofyour-seat epic, Kon-Tiki is brimming with wonder at the natural world, and at the feats man can accomplish. Spectacularly realized, this is the most expensive Norwegian ﬁlm ever

Monstrous, ravishing, and unearthly, Leviathan is a full-on sensory immersion into the dark work of commercial ﬁshing. On a vessel off the coast of Massachusetts, dozens of small, waterproof cameras were tethered to ﬁshermen, their equipment, or simply tossed overboard; the result is an entirely new cinematic experience. We plunge into the churning ocean and, with head-spinning disorientation, emerge on the deck, only to fall back into the deep, and rise again. With hundreds of captured ﬁsh, we hurtle and ricochet throughout the ship, while a chaos of seagulls ﬂap overhead. There is no opportunity to get your bearings — one must submit to the bewildering onrush of sound and image. Co-directors Lucien Castaing-Taylor (Sweetgrass, WFF 2010) and Véréna Paravel (Foreign Parts, WFF 2011) present a ﬁlmic experience that would have been impossible to realize just a few years ago. Welcome to the cinema of the 21st century. “Leviathan, which looks and sounds like no other documentary in memory, is likely to be one of the most talked-about art ﬁlms of the year” (Dennis Lim, New York Times). “A truly startling documentary… a vision of terrible beauty. Leviathan is in every way sensational” (J. Hober-

man, Artinfo). “Astonishing. Renders the landscape of ship and sea with a cinematic sensibility more akin to gothic sci-ﬁ than to seafaring tales. One doesn’t so much see this ﬁlm as feel it” (Filmmaker). (MK)

Milwaukee-based musician John Petty’s work mixes classic Americana folk with contemporary synthesizers. As he puts together the debut album of his new one-man-band, All Good Things, Petty reﬂects upon the winding professional and personal paths that have brought him to his latest musical venture. Director Michael Floyd Hofstedt II interweaves Petty’s musings within-studio footage that offers a tantalizing taste of the musician’s singular sound. (MC)

An inspiring account of both a lost history and its dogged excavator, The Librarian and the Banjo recounts the work of Dena Epstein, a music librarian whose inquiry into a forgotten abolitionist’s diary (at the Wisconsin Historical Society) sparked an interest in the history of black folk music. Her research over the next twenty-ﬁve years ultimately proved that the banjo — long associated with rural white culture in the South —

originated in Africa. Epstein’s work not only exploded previously-held views about black folk music and its legitimacy as a subject of academic study, but helped to spark a new generation of African-American string band music. Madison-based director Jim Carrier explores both Epstein’s career and the impact that her work has had amongst music scholars, practitioners, and fans with a clarity and attention to detail worthy of his subject. Folk luminaries like Bela Fleck, Eric Weissberg, and the Carolina Chocolate Drops provide eloquent testimonials, but the ﬁlm’s true star is Epstein herself. Now ninety-six years old, she continues to exhibit the intelligence, tenacity, and love of her subject that The Librarian and the Banjo chronicles with such infectious enthusiasm. (MC)

Life and Strange Surprizing Adventures SEE: All the Light in the Sky

A contemporary spin on the classic fairy tale, Little Red follows the teenage Red (Hannah Obst) as she embarks on a secret trip to Florida.