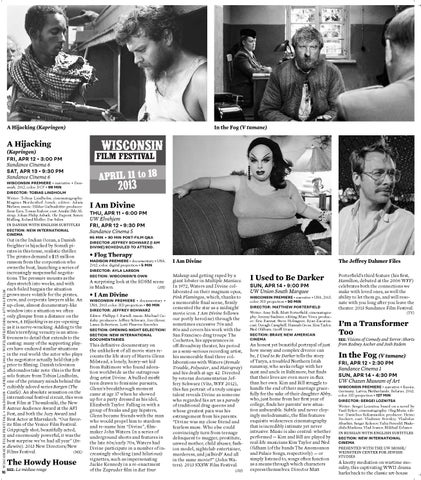 In the Fog (V tumane)

Out in the Indian Ocean, a Danish freighter is hijacked by Somali pirates in this tense, realistic thriller. The pirates demand a $15 million ransom from the corporation who owns the boat, launching a series of increasingly suspenseful negotiations. The pressure mounts as the days stretch into weeks, and with each foiled bargain the situation grows more volatile for the pirates, crew, and corporate lawyers alike. An up-close, almost documentary-like window into a situation we often only glimpse from a distance on the news, A Hijacking is as eye-opening as it is nerve-wracking. Adding to the ﬁlm’s terrifying veracity is an attentiveness to detail that extends to the casting: many of the supporting players have endured similar situations in the real world: the actor who plays the negotiator actually held that job prior to ﬁlming. Danish television aﬁcionados take note: this is the ﬁrst solo feature from Tobias Lindholm, one of the primary minds behind the cultishly adored series Borgen (The Castle). An absolute sensation on the international festival circuit, this won Best Film at Thessaloniki, the New Auteur Audience Award at the AFI Fest, and both the Jury Award and Best Actor at Marrakech. “Our favorite ﬁlm of the Venice Film Festival. Grippingly shot, beautifully acted, and enormously powerful, it was the best surprise we’ve had all year” (Indiewire). 2013 New Directors/New Films Festival. (MK)

This deﬁnitive documentary on the unlikeliest of all movie stars recounts the life story of Harris Glenn Milstead, a lonely, heavy-set kid from Baltimore who found adoration worldwide as the outrageous drag artist Divine. A bullied misﬁt teen drawn to feminine pursuits, Glenn’s breakthrough moment came at age 17 when he showed up for a party dressed as his idol, Elizabeth Taylor. Falling in with a group of freaks and gay hipsters, Glenn became friends with the man who would propel him to stardom and re-name him “Divine”, ﬁlmmaker John Waters. In a series of underground shorts and features in the late 60s/early 70s, Waters had Divine participate in a number of increasingly shocking (and hilarious) vignettes, such as impersonating Jackie Kennedy in a re-enactment of the Zapruder ﬁlm in Eat Your

Makeup and getting raped by a giant lobster in Multiple Maniacs. In 1972, Waters and Divine collaborated on their magnum opus, Pink Flamingos, which, thanks to a memorable ﬁnal scene, ﬁrmly cemented the star as a midnight movie icon. I Am Divine follows our portly hero(ine) through the sometimes excessive 70s and 80s and covers his work with the San Francisco drag troupe The Cockettes, his appearances in off-Broadway theater, his period as a semi-serious recording artist, his memorable ﬁnal three collaborations with Waters (Female Trouble, Polyester, and Hairspray) and his death at age 42. Directed by veteran documentarian Jeffery Schwarz (Vito, WFF 2012), this fun portrait of a truly unique talent reveals Divine as someone who regarded his art as a parody of traditional drag queens and whose greatest pain was his estrangement from his parents. “Divine was my close friend and fearless muse. Who else could convincingly turn from teenage delinquent to mugger, prostitute, unwed mother, child abuser, fashion model, nightclub entertainer, murderess, and jailbird? And all in the same movie?” (John Waters). 2013 SXSW Film Festival. (JH)

An honest yet beautiful portrayal of just how messy and complex divorce can be, I Used to Be Darker tells the story of Taryn, a troubled Northern Irish runaway, who seeks refuge with her aunt and uncle in Baltimore, but ﬁnds that their lives are even more in-ﬂux than her own. Kim and Bill struggle to handle the end of their marriage gracefully for the sake of their daughter Abby, who, just home from her ﬁrst year of college, ﬁnds her parents’ new situation unbearable. Subtle and never cloyingly melodramatic, the ﬁlm features exquisite widescreen cinematography that is incredibly intimate yet never intrusive. Music is also central: whether performed — Kim and Bill are played by real-life musicians Kim Taylor and Ned Oldham (of the bands The Anomoanon and Palace Songs, respectively) — or simply listened to, songs often function as a means through which characters express themselves. Director Matt

Porterﬁeld’s third feature (his ﬁrst, Hamilton, debuted at the 2006 WFF) celebrates both the connections we make with loved ones, as well the ability to let them go, and will resonate with you long after you leave the theater. 2013 Sundance Film Festival. (TY)

I’m a Transformer Too SEE: Visions of Comedy and Terror: Shorts from Rodney Ascher and Josh Fadem

A knotty mediation on wartime morality, this captivating WWII drama harks back to the classic art-house