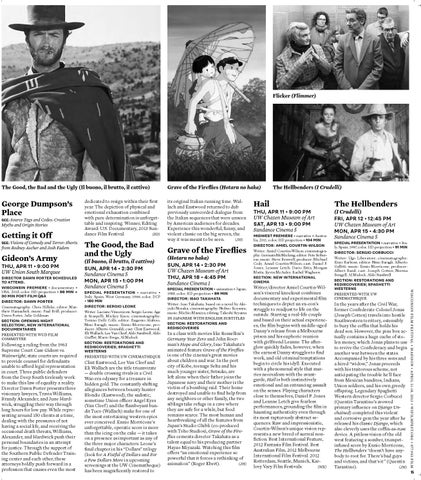 The Good, the Bad and the Ugly (Il buono, il brutto, il cattivo)

Getting it Off SEE: Visions of Comedy and Terror: Shorts

Following a ruling from the 1963 Supreme Court Case Gideon vs. Wainwright, state courts are required to provide counsel for defendants unable to afford legal representation in court. Three public defenders from the Deep South tirelessly work to make this law of equality a reality. Director Dawn Porter presents three visionary lawyers, Travis Williams, Brandy Alexander, and June Hardwick, struggling their way through long hours for low pay. While representing around 150 clients at a time, dealing with the pressures of not having a social life, and receiving the occasional death threats, Williams, Alexander, and Hardwick push their personal boundaries in an attempt for justice. Through the support of the Southern Public Defender Training center and each other, these attorneys boldly push forward in a profession that causes even the most

Clint Eastwood, Lee Van Cleef and Eli Wallach are the title triumvirate — double crossing rivals in a Civil War-era odyssey for a treasure in hidden gold. The constantly shifting allegiances between bounty hunter Blondie (Eastwood), the sadistic, sometime Union ofﬁcer Angel Eyes (Van Cleef ) and the ﬂamboyant bandit Tuco (Wallach) make for one of the most entertaining western epics ever conceived. Ennio Morricone’s unforgettable, operatic score is more than the icing on the cake — it takes on a presence as important as any of the three major characters. Leone’s ﬁnal chapter in his “Dollars” trilogy (look for A Fistful of Dollars and For a Few Dollars More in upcoming screenings at the UW Cinematheque) has been magniﬁcently restored to

its original Italian running time. Wallach and Eastwood returned to dub previously unrecorded dialogue from the Italian sequences that were unseen by American audiences for decades. Experience this wonderful, funny, and violent classic on the big screen, the way it was meant to be seen. (JH)

In a class with movies like Rossellini’s Germany Year Zero and John Boorman’s Hope and Glory, Isao Takahata’s animated feature Grave of the Fireﬂies is one of the cinema’s great movies about children and war. In the port city of Kobe, teenage Selta and his much younger sister, Setsuko, are left alone when their father joins the Japanese navy and their mother is the victim of a bombing raid. Their home destroyed and unable to ﬁnd help from any neighbors or other family, the two siblings take refuge in a cave where they are safe for a while, but food remains scarce. The most human and heartbreaking of all the features from Japan’s Studio Ghibli (co-produced with Toho Studios), Grave of the Fireﬂies cements director Takahata as a talent equal to his producing partner Hayao Miyazaki. Watching this ﬁlm offers “an emotional experience so powerful that it forces a rethinking of animation” (Roger Ebert). (JH)

Writer/director Amiel Courtin-Wilson’s visceral knockout combines documentary and experimental ﬁlm techniques to depict an ex-con’s struggle to readjust to life on the outside. Starring a real-life couple and based on their actual experiences, the ﬁlm begins with middle-aged Danny’s release from a Melbourne prison and his euphoric reunion with girlfriend Leanne. The afterglow quickly fades, however, when the earnest Danny struggles to ﬁnd work, and old criminal temptations begin to circle his idyll. Executed with a phenomenal style that marries neorealism with the avantgarde, Hail is both instinctively emotional and an entrancing assault on the senses. Playing characters close to themselves, Daniel P. Jones and Leanne Letch give fearless performances, grounding the ﬁlm in haunting authenticity even through its most rapturously abstract sequences. Raw and impressionistic, Courtin-Wilson’s unique vision represents a new breed of surreal nonﬁction. Best International Feature, 2012 Fantasia Film Festival. Best Australian Film, 2012 Melbourne International Film Festival. 2012 Rotterdam, Seattle, Munich, Karlovy Vary Film Festivals. (MK)

In the years after the Civil War, former Confederate Colonel Jonas (Joseph Cotten) travels into hostile Southwestern territory, ostensibly to bury the cofﬁn that holds his dead son. However, the pine box actually contains a huge cache of stolen money, which Jonas plans to use to revive the Confederacy and begin another war between the states. Accompanied by his three sons and a hired “widow,” Jonas proceeds with his traitorous scheme, not anticipating the trouble he’ll face from Mexican banditos, Indians, Union soldiers, and his own greedy offspring. Legendary Spaghetti Western director Sergio Corbucci (Quentin Tarantino’s avowed primary inﬂuence on Django Unchained) completed this violent and corrosive gem the year after he released his classic Django, which also cleverly uses the cofﬁn-as-ruse device. A pitiless vision of the old west featuring a somber, trumpetinfused score by Ennio Morricone, The Hellbenders “doesn’t have anybody to root for. There’s bad guys and victims, and that’s it” (Quentin Tarantino). (JH)

Grave of the Fireﬂies (Hotaru no haka)