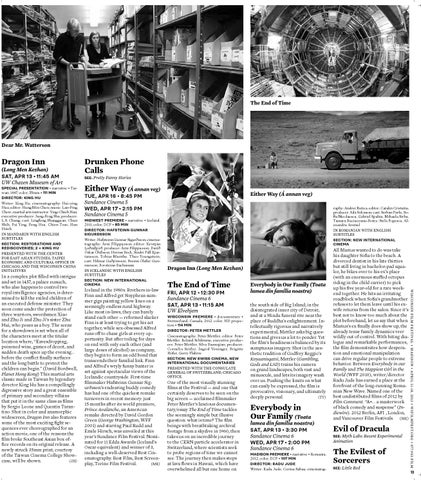 The End of Time

Iceland in the 1980s. Brothers in-law Finn and Alfred get Sisyphean summer gigs painting yellow lines on a seemingly endless rural highway. Like most in-laws, they can barely stand each other — reformed slacker Finn is at least trying to get his act together, while sex-obsessed Alfred runs off to chase girls at every opportunity. But after toiling for days on end with only each other (and large doses of alcohol) as company, they begin to form an odd bond that transcends their familial link. Finn and Alfred’s wryly funny banter is set against spectacular views of the Icelandic countryside. First-time ﬁlmmaker Hafsteinn Gunnar Sigurðsson’s endearing buddy comedy has had one of the quickest remake turnovers in recent memory: just 15 months after its world premiere, Prince Avalanche, an American remake directed by David Gordon Green (George Washington, WFF 2001) and starring Paul Rudd and Emile Hirsch, was unveiled at this year’s Sundance Film Festival. Nominated for 11 Edda Awards (Iceland’s Oscar equivalent) and winner of 3, including a well-deserved Best Cinematography. Best Film, Best Screenplay, Torino Film Festival. (MK)

One of the most visually stunning ﬁlms at the Festival — and one that certainly deserves to be seen on the big screen — acclaimed ﬁlmmaker Peter Mettler’s luscious documentary/essay The End of Time tackles the seemingly simple but illusive question: what is time? The ﬁlm beings with breathtaking archival footage from a skydive in 1960, then takes us on an incredible journey to the CERN particle accelerator in Switzerland, where scientists seek to probe regions of time we cannot see. The journey then makes stops at lava ﬂows in Hawaii, which have overwhelmed all but one home on

Everybody in Our Family (Toata lumea din familia noastra) the south side of Big Island; in the disintegrated inner city of Detroit; and at a Hindu funeral rite near the place of Buddha’s enlightenment. Intellectually rigorous and narratively experimental, Mettler asks big questions and gives us a lot to ponder. Yet the ﬁlm’s headiness is balanced by its sumptuous imagery. Shot in the aesthetic tradition of Godfrey Reggio’s Koyaanisqatsi, Mettler (Gambling, Gods and LSD) trains his camera on grand landscapes, both vast and minuscule, and lets its imagery wash over us. Pushing the limits on what can easily be expressed, the ﬁlm is provocative, visionary, and ultimately deeply personal. (TY)

All Marius wanted to do was take his daughter Soﬁa to the beach. A divorced dentist in his late thirties but still living in bachelor-pad squalor, he bikes over to his ex’s place (with an enormous stuffed octopus riding in the child carrier) to pick up his ﬁve year-old for a rare weekend together. He hits an irritating roadblock when Soﬁa’s grandmother refuses to let them leave until his exwife returns from the salon. Since it’s best not to know too much about the plot beforehand, let us say that when Marius’s ex ﬁnally does show up, the already tense family dynamics veer wildly out of control. With biting dialogue and remarkable performances, the ﬁlm demonstrates how desperation and emotional manipulation can drive regular people to extreme behavior. Between Everybody in our Family and The Happiest Girl in the World (WFF 2010), writer/director Radu Jude has earned a place at the forefront of the long-running Romanian New Wave. Named one of the best undistributed ﬁlms of 2012 by Film Comment. “A+… a masterwork of black comedy and suspense” (Indiewire). 2012 Berlin, AFI , London, and Vancouver Film Festivals. (MK)

In a complex plot ﬁlled with intrigue and set in 1457, a palace eunuch, who also happens to control two royal intelligence agencies, is determined to kill the exiled children of an executed defense minister. They soon come under the protection of three warriors, swordsmen Xiao and Zhu Ji and Zhu Ji’s sister Zhu Hui, who poses as a boy. The scene for a showdown is set when all of the characters meet at the titular location where, “Eavesdropping, poisoned wine, games of deceit, and sudden death spice up the evening… before the conﬂict ﬁnally surfaces and the long battle to protect the children can begin.” (David Bordwell, Planet Hong Kong) This martial arts classic made in Taiwan by legendary director King Hu has a compellingly digressive story and a great ensemble of primary and secondary villains that put it in the same class as ﬁlms by Sergio Leone and Quentin Tarantino. Shot in color and anamorphic widescreen, Dragon Inn also features some of the most exciting ﬁght sequences ever choreographed for an action movie, one of the reasons the ﬁlm broke Southeast Asian box ofﬁce records on its original release. A newly struck 35mm print, courtesy of the Taiwan Cinema College Showcase, will be shown. (JH)