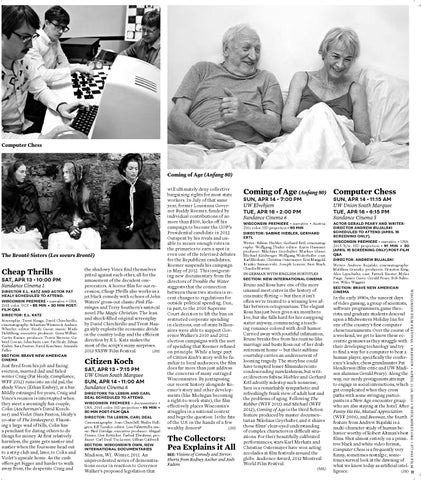 Just ﬁred from his job and facing eviction, married dad and failed writer Craig (Pat Healy, Compliance, WFF 2012) runs into an old pal, the shady Vince (Ethan Embry), at a bar. Mildly estranged for years, Craig and Vince’s reunion is interrupted when they meet a seemingly fun couple, Colin (Anchorman’s David Koechner) and Violet (Sara Paxton, Healy’s co-star of The Innkeepers). Flaunting a large wad of bills, Colin has a penchant for daring others to do things for money. At ﬁrst relatively harmless, the game gets nastier and nastier when the foursome head out to a strip club and, later, to Colin and Violet’s upscale home. As the cash offers get bigger and harder to walk away from, the desperate Craig and

The Collectors: Pea Explains it All SEE: Visions of Comedy and Terror: Shorts from Rodney Ascher and Josh Fadem

Bruno and Rosa have one of the more unusual meet-cutes in the history of cinematic ﬂirting — but then it isn’t often we’re treated to a winning love affair between octogenarians. The elegant Rosa has just been given six months to live, but she falls hard for her easygoing suitor anyway, commencing a touching romance colored with droll humor. Carried away with youthful infatuation, Bruno breaks free from his routine-like marriage and busts Rosa out of her drab retirement home — but their sublime courtship carries an undercurrent of looming tragedy. The storyline could have tempted lesser ﬁlmmakers into condescending mawkishness, but writer/directors Sabine Hiebler and Gerhard Ertl adroitly sidestep such nonsense; here is a remarkably sympathetic and refreshingly frank view of adult lust and the problems of aging. Following The Robber (WFF 2011) and Michael (WFF 2012), Coming of Age is the third ﬁction feature produced by master documentarian Nikolaus Geyrhalter, and it shares those ﬁlms’ clear-eyed understanding of complex characters in difﬁcult situations. For their beautifully calibrated performances, stars Karl Merkatz and Christine Ostermayer have won acting accolades at ﬁlm festivals around the globe. Audience Award, 2012 Montreal World Film Festival. (MK)

the shadowy Vince ﬁnd themselves pitted against each other, all for the amusement of the decadent onepercenters. A horror ﬁlm for our recession, Cheap Thrills also works as a jet black comedy with echoes of John Waters’ gross-out classic Pink Flamingos and Terry Southern’s satirical novel The Magic Christian. The lean and shock-ﬁlled original screenplay by David Chirchirillo and Trent Haaga slyly exploits the economic divide in the country today and the efﬁcient direction by E.L. Katz makes the most of the script’s many surprises. 2013 SXSW Film Festival. (JH)

will ultimately deny collective bargaining rights for most state workers. In July of that same year, former Louisiana Governor Buddy Roemer, funded by individual contributions of no more than $100, kicks off his campaign to become the GOP’s Presidential candidate in 2012. Outspent by his rivals and unable to secure enough votes in the primaries to earn a spot in even one of the televised debates for the Republican candidates, Roemer suspends his campaign in May of 2012. This invigorating new documentary from the directors of Trouble the Water suggests that the connection between these two stories is recent changes to regulations for outside political spending. Due, in part, to the 2010 Supreme Court decision to lift the ban on restricted corporate spending in elections, out-of-state billionaires were able to support Governor Walker’s 2010 and 2012 election campaigns with the sort of spending that Roemer refused on principle. While a large part of Citizen Koch’s story will be familiar to local audiences, the ﬁlm does far more than just address the concerns of many outraged Wisconsinites. By juxtaposing our recent history alongside Roemer’s story and other developments (like Michigan becoming a right-to-work state), the ﬁlm effectively places Wisconsin’s struggles in a national context and begs the question: Is the fate of the U.S. in the hands of a few wealthy donors? (JH)

In the early 1980s, the nascent days of video gaming, a group of scientists, software programmers, game theorists, and graduate students descend upon a Midwestern Holiday Inn for one of the country’s ﬁrst computer chess tournaments. Over the course of a weekend, we get to know these eccentric geniuses as they struggle with their developing technology and try to ﬁnd a way for a computer to beat a human player, speciﬁcally the conference’s leader, chess grandmaster Pat Henderson (ﬁlm critic and UW Madison alumnus Gerald Peary). Along the way, our nerdy protagonists attempt to engage in social interactions, which get complicated when they cross paths with some swinging participants in a New Age encounter group who are also staying at the hotel. After Funny Ha Ha, Mutual Appreciation (WFF 2006), and Beeswax, the fourth feature from Andrew Bujalski is a multi-character study of human behavior worthy of Robert Altman’s best ﬁlms. Shot almost entirely on a primitive black and white video format, Computer Chess is a frequently very funny, sometimes nostalgic, sometimes surreal look at the dawning of what we know today as artiﬁcial intelligence. (JH) 11