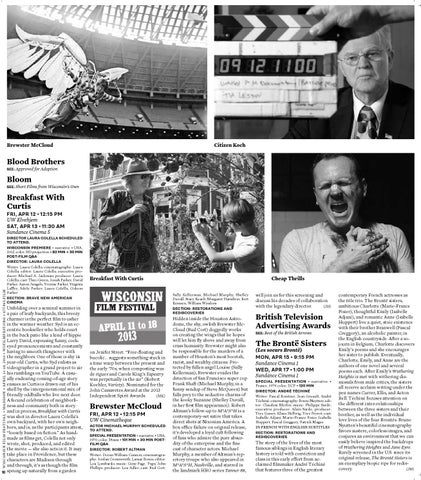 Unfolding over a seminal summer in a pair of leafy backyards, this breezy charmer is the perfect ﬁlm to usher in the warmer weather. Syd is an eccentric bookseller who holds court in the back patio like a kind of hippie Larry David, espousing funny, cockeyed pronouncements and constantly having to smooth thingsover with the neighbors. One of those is shy 14 year-old Curtis, who Syd enlists as videographer in a grand project to air his ramblings on YouTube. A casually endearing coming-of-age story ensues as Curtis is drawn out of his shell by the intergenerational mix of friendly oddballs who live next door. A fecund celebration of neighborliness and community both in story and in process, Breakfast with Curtis was shot in director Laura Colella’s own backyard, with her own neighbors, and is, as the participants attest, “loosely based on ﬁction.” As handmade as ﬁlms get, Colella not only wrote, shot, produced, and edited the movie — she also acts in it. It may take place in Providence, but these characters are Madison through and through; it’s as though the ﬁlm 10 sprung up naturally from a garden

on Jenifer Street. “Free-ﬂoating and bucolic… suggests something stuck in a time warp between the present and the early ‘70s, when composting was de riguer and Carole King’s Tapestry was perpetually in the air” (Robert Koehler, Variety). Nominated for the John Cassavetes Award at the 2013 Independent Spirit Awards. (MK)

Hidden inside the Houston Astrodome, the shy, owlish Brewster McCloud (Bud Cort) doggedly works on creating the wings that he hopes will let him ﬂy above and away from crass humanity. Brewster might also be responsible for the murders of a number of Houston’s most boorish, racist, and wealthy citizens. Protected by fallen angel Louise (Sally Kellerman), Brewster evades the detection of San Francisco super cop Frank Shaft (Michael Murphy, in a funny sendup of Steve McQueen) but falls prey to the seductive charms of the kooky Suzanne (Shelley Duvall, in her ﬁrst ﬁlm appearance). Robert Altman’s follow-up to M*A*S*H is a contemporary-set satire that takes direct shots at Nixonian America. A box ofﬁce failure on original release, it’s developed a loyal cult following of fans who admire the pure absurdity of the enterprise and the ﬁne cast of character actors. Michael Murphy, a member of Altman’s repertory troupe who also appeared in M*A*S*H, Nashville, and starred in the landmark HBO series Tanner 88,

will join us for this screening and discuss his decades of collaboration with the legendary director. (JH)

contemporary French actresses as the title trio. The Brontë sisters, ambitious Charlotte (Marie-France Pisier), thoughtful Emily (Isabelle Adjani), and romantic Anne (Isabelle Huppert) live a quiet, stoic existence with their brother Branwell (Pascal Greggory), an alcoholic painter, in the English countryside. After a sojourn in Belgium, Charlotte discovers Emily’s poems and she encourages her sister to publish. Eventually, Charlotte, Emily, and Anne are the authors of one novel and several poems each. After Emily’s Wuthering Heights is met with withering dismissals from male critics, the sisters all receive acclaim writing under the pen names Currer, Ellis, and Acton Bell. Téchiné focuses attention on the different inter-relationships between the three sisters and their brother, as well as the individual love lives of the four Brontës. Bruno Nyutten’s beautiful cinematography favors austere, colorless images, and conjures an environment that we can easily believe inspired the backdrops of Wuthering Heights and Jane Eyre. Rarely screened in the U.S. since its original release, The Brontë Sisters is an exemplary biopic ripe for rediscovery. (JH)