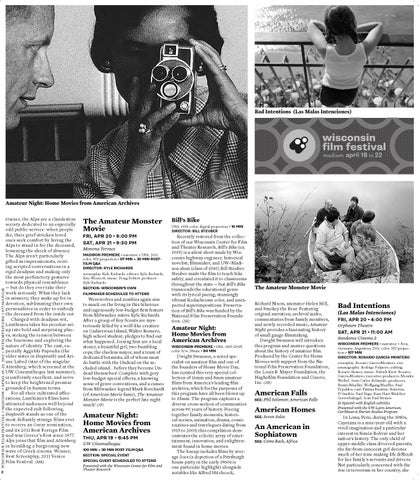 trainer, the Alps are a clandestine society dedicated to an especially odd public service: when people die, their grief stricken loved ones seek comfort by hiring the Alps to stand in for the deceased, lessening the shock of absence. The Alps aren’t particularly gifted as impressionists, reciting scripted conversations in a rigid deadpan and making only the most perfunctory gestures towards physical resemblance — but do they ever take their work seriously. What they lack in mimicry, they make up for in devotion, sublimating their own personalities in order to embody the deceased from the inside out. Charged with deadpan wit, Lanthimos takes his peculiar setup into bold and surprising places, stoking the tension between the foursome and exploring the nature of identity. The cast, especially Aggeliki Papoulia (the older sister in Dogtooth) and Ariane Labed (star of the singular Attenberg, which screened at the UW Cinematheque last summer), is uniformly excellent, and serve to keep the heightened premise grounded in human terms. For all their cultivated affectations, Lanthimis’s films have attracted audiences well beyond the expected cult following, Dogtooth stands as one of the most defiantly strange films ever to receive an Oscar nomination, and its 2011 Best Foreign Film nod was Greece’s first since 1977. Alps joins that film and Attenberg in heralding a burgeoning new wave of Greek cinema. Winner, Best Screenplay, 2011 Venice Film Festival. (MK)

Recently restored from the collection of our Wisconsin Center for Film and Theater Research, Bill’s Bike (ca. 1939) is a silent short made by Wisconsin highway engineer, historical novelist, ﬁlmmaker, and UW–Madison alum (class of 1930) Bill Steuber. Steuber made the ﬁlm to teach bike safety, and circulated it to classrooms throughout the state — but Bill’s Bike transcends the educational genre with its lyrical pacing, stunningly vibrant Kodachrome color, and unexpected superimpositions. Preservation of Bill’s Bike was funded by the National Film Preservation Foundation. (JH)

Werewolves and zombies again aim to snack on the living in this hilarious and ingeniously low-budget ﬁrst feature from Milwaukee native Kyle Richards. After a group of Boy Scouts are mysteriously killed by a wolf-like creature on Cadaverous Island, Walter Romero, high school student, pledges to ﬁnd out what happened. Joining him are a local stoner, a beautiful girl, two bumbling cops, the clueless mayor, and a team of dedicated botanists, all of whom must do battle with the Undead on the secluded island… before they become Undead themselves! Complete with gory low-budget special effects, a knowing sense of genre conventions, and a cameo from Milwaukee legend Mark Borchardt (of American Movie fame), The Amateur Monster Movie is the perfect late night snack! (JP)

Presented with the Wisconsin Center for Film and Theater Research

Dwight Swanson, a noted specialist on amateur ﬁlm and one of the founders of Home Movie Day, has curated this very special collection of 16mm and 8mm amateur ﬁlms from America’s leading ﬁlm archives, which for the purposes of this program have all been blown up to 35mm. The program captures a diverse cross-section of communities across 90 years of history. Piecing together family moments, historical scenes, animation, drama, comic routines and travelogues dating from 1915 to 2005, this compilation demonstrates the eclectic array of entertainment, innovation, and enlightenment found in home movies. The lineup includes ﬁlms by average Joes (a depiction of a Pittsburgh house party in the early 1960s is one particular highlight) alongside notables like Alfred Hitchcock,

An American in Sophiatown SEE: Come Back, Africa

In Lima, Peru, during the 1980s, Cayetana is a nine-year-old with a vivid imagination and a particular interest in Simón Bolivar and her nation’s history. The only child of upper-middle class divorced parents, the far-from-innocent girl devotes much of her time making life difﬁcult for her family’s servants and drivers. Not particularly concerned with the rise in terrorism in her country, she