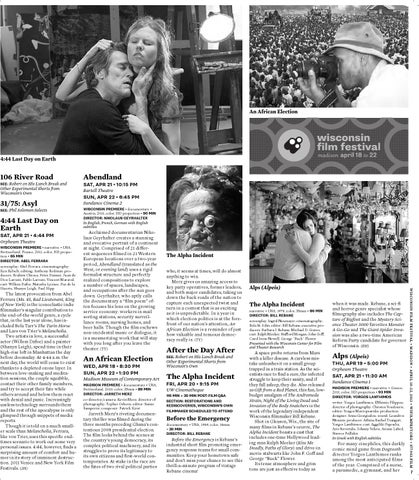 106 River Road SEE: Robert on His Lunch Break and

The latest provocation from Abel Ferrara (Ms. 45, Bad Lieutenant, King of New York) is the iconoclastic indie ﬁlmmaker’s singular contribution to the end-of-the-world genre, a cycle that, in the last year alone, has included Bela Tarr’s The Turin Horse and Lars von Trier’s Melancholia. Two artists in love, a successful actor (Willem Dafoe) and a painter (Shanyn Leigh), spend time in their high-rise loft in Manhattan the day before doomsday. At 4:44 a.m. the next day, the world will cease to exist thanks to a depleted ozone layer. In between love-making and meditation sessions, the couple squabble, contact their other family members, and try to accept their fate while others around and below them react with denial and panic. Increasingly useless technology surrounds them and the rest of the apocalypse is only glimpsed through snippets of media reports. Though it is told on a much smaller scale than Melancholia, Ferrara, like von Trier, uses this speciﬁc endtimes scenario to work out some very personal issues. 4:44, however, ﬁnds a surprising amount of comfort and humor in its story of imminent destruction. 2011 Venice and New York Film Festivals. (JH)

Acclaimed documentarian Nikolaus Geyrhalter creates a stunning and evocative portrait of a continent at night. Comprised of 21 different sequences ﬁlmed in 21 Western European locations over a two-year period, Abendland (translated as the West, or evening land) uses a rigid formalist structure and perfectly realized compositions to explore a number of spaces, landscapes, and occupations after the sun goes down. Geyrhalter, who aptly calls the documentary a “ﬁlm poem” often focuses his lens on the growing service economy: workers in mail sorting stations, security surveillance rooms, nursing homes, and beer halls. Though the ﬁlm eschews non-incidental music or dialogue, it is a mesmerizing work that will stay with you long after you leave the theater. (TY)

The Alpha Incident who, it seems at times, will do almost anything to win. Merz gives us amazing access to key party operatives, former leaders, and both major candidates, taking us down the back roads of the nation to capture each unexpected twist and turn in a contest that is as exciting as it is unpredictable. In a year in which election politics is at the forefront of our nation’s attention, An African Election is a reminder of just how valuable and tenuous democracy really is. (TY)

After the Day After SEE: Robert on His Lunch Break and Other Experimental Shorts from Wisconsin’s Own

Jarreth Merz’s riveting documentary thriller was ﬁlmed during the three months preceding Ghana’s contentious 2008 presidential election. The ﬁlm looks behind the scenes at the country’s young democracy, its complex political machinery, and its struggles to prove its legitimacy to its own citizens and ﬁrst-world contemporaries. At stake in the race are the fates of two rival political parties

Before the Emergency is Rebane’s industrial short ﬁlm promoting emergency response teams for small communities. Keep your hometown safe and don’t miss your chance to see this thrill-a-minute program of vintage Rebane cinema!

A space probe returns from Mars with a killer disease. A careless mistake unleashes it on a small group trapped in a train station. As the scientists race to ﬁnd a cure, the infected struggle to keep their sanity, and if they fall asleep, they die. Also released as Gift from a Red Planet, this fun, lowbudget amalgam of The Andromeda Strain, Night of the Living Dead and Invasion of the Body Snatchers is the work of the legendary independent Wisconsin ﬁlmmaker Bill Rebane. Shot in Gleason, Wis., the site of many ﬁlms in Rebane’s oeuvre, The Alpha Incident boasts a cast that includes one-time Hollywood leading man Ralph Meeker (Kiss Me Deadly, Paths of Glory) and drive-in movie stalwarts like John F. Goff and George “Buck” Flower. Its tense atmosphere and grim tone are just as effective today as

when it was made. Rebane, a sci-ﬁ and horror genre specialist whose ﬁlmography also includes The Capture of Bigfoot and the Mystery Science Theater 3000 favorites Monster A Go-Go and The Giant Spider Invasion was also a two-time American Reform Party candidate for governor of Wisconsin. (EH)

For many cinephiles, this darkly comic mind game from Dogtooth director Yorgos Lanthimos ranks among the most anticipated films of the year. Comprised of a nurse, a paramedic, a gymnast, and her