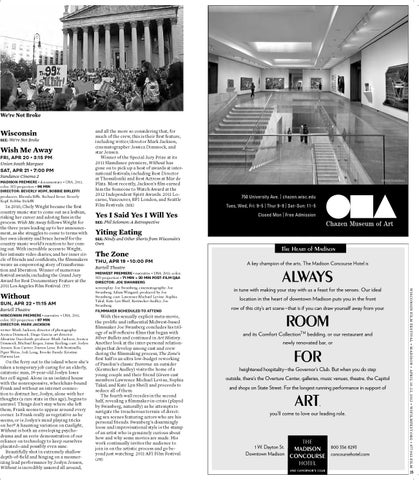 Yes I Said Yes I Will Yes

On the ferry out to the island where she’s taken a temporary job caring for an elderly, catatonic man, 19-year-old Joslyn loses her cell signal. Alone in an isolated house with the nonresponsive, wheelchair-bound Frank and without an internet connection to distract her, Joslyn, alone with her thoughts (a rare state in this age), begins to unravel. Things don’t stay where she left them; Frank seems to appear around every corner. Is Frank really as vegetative as he seems, or is Joslyn’s mind playing tricks on her? A haunting variation on Gaslight, Without is both an enveloping psychodrama and an eerie demonstration of our reliance on technology to keep ourselves placated—and possibly even sane. Beautifully shot in extremely shallow depth-of-ﬁeld and hinging on a mesmerizing lead performance by Joslyn Jensen, Without is incredibly assured all around,

SEE: Nindy and Other Shorts from Wisconsin’s

With this sexually explicit meta-movie, the proliﬁc and inﬂuential Midwest-based ﬁlmmaker Joe Swanberg concludes his trilogy of self-reﬂexive ﬁlms that began with Silver Bullets and continued in Art History. Another look at the inter-personal relationships that develop among cast and crew during the ﬁlmmaking process, The Zone’s ﬁrst half is an ultra low-budget reworking of Pasolini’s classic Teorema: an outsider (Kentucker Audley) visits the home of a young couple and their friend (Green cast members Lawrence Michael Levine, Sophia Takal, and Kate Lyn Sheil) and proceeds to seduce all of them. The fourth wall recedes in the second half, revealing a ﬁlmmaker-in-crisis (played by Swanberg, naturally) as he attempts to navigate the treacherous terrain of directing sex scenes featuring actors who are his personal friends. Swanberg’s disarmingly loose and improvisational style is the stamp of an artist who is genuinely curious about how and why some movies are made. His work continually invites the audience to join in on the artistic process and go beyond just watching. 2011 AFI Film Festival. (JH)

The Heart of Madison A key champion of the arts, The Madison Concourse Hotel is

in tune with making your stay with us a feast for the senses. Our ideal location in the heart of downtown Madison puts you in the front row of this city’s art scene –that is if you can draw yourself away from your

and its Comfort CollectionTM bedding, or our restaurant and newly renovated bar, or

heightened hospitality–the Governor&#39;s Club. But when you do step outside, there&#39;s the Overture Center, galleries, music venues, theatre, the Capitol and shops on State Street. For the longest running performance in support of

In 2010, Chely Wright became the ﬁrst country music star to come out as a lesbian, risking her career and adoring fans in the process. Wish Me Away follows Wright for the three years leading up to her announcement, as she struggles to come to terms with her own identity and brace herself for the country music world’s reaction to her coming out. With incredible access to Wright, her intimate video diaries, and her inner circle of friends and conﬁdents, the ﬁlmmakers weave an empowering story of transformation and liberation. Winner of numerous festival awards, including the Grand Jury Award for Best Documentary Feature at the 2011 Los Angeles Film Festival. (TY)

and all the more so considering that, for much of the crew, this is their ﬁrst feature, including writer/director Mark Jackson, cinematographer Jessica Dimmock, and star Jensen. Winner of the Special Jury Prize at its 2011 Slamdance premiere, Without has gone on to pick up a host of awards at international festivals, including Best Director at Thessaloniki and Best Actress at Mar de Plata. Most recently, Jackson’s ﬁlm earned him the Someone to Watch Award at the 2012 Independent Spirit Awards. 2011 Locarno, Vancouver, BFI London, and Seattle Film Festivals. (MK)