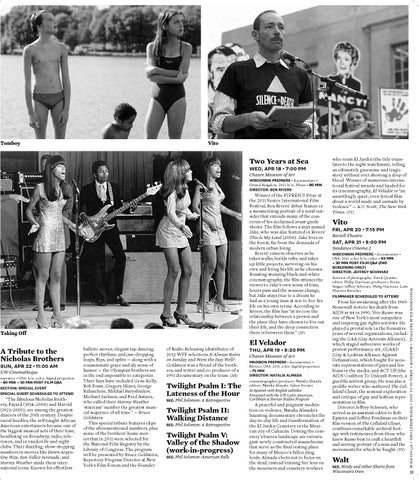 “The fabulous Nicholas Brothers, Fayard (1914–2006) and Harold (1921–2000), are among the greatest dancers of the 20th century. Despite racial hurdles, the self-taught African American entertainers became one of the biggest musical acts of their time, headlining on Broadway, radio, television, and in vaudeville and nightclubs. Their dazzling, show-stopping numbers in movies like Down Argentine Way, Sun Valley Serenade, and Stormy Weather made them international icons. Known for effortless

balletic moves, elegant tap dancing, perfect rhythms, and jaw-dropping leaps, ﬂips, and splits — along with a consummate grace and sly sense of humor — the Olympian brothers are in the end impossible to categorize. Their fans have included Gene Kelly, Bob Fosse, Gregory Hines, George Balanchine, Mikhail Baryshnikov, Michael Jackson, and Fred Astaire, who called their Stormy Weather ‘staircase’ number the greatest musical sequence of all time.” — Bruce Goldstein. This special tribute features clips of the aforementioned numbers, plus some of the brothers’ home movies that in 2011 were selected for the National Film Registry by the Library of Congress. The program will be presented by Bruce Goldstein, Repertory Program Director at New York’s Film Forum and the Founder

of Rialto Releasing (distributor of 2012 WFF selections It Always Rains on Sunday and Went the Day Well?. Goldstein was a friend of the brothers, and writer and co-producer of a 1991 documentary on the team. (JH)

Twilight Psalm I: The Lateness of the Hour SEE: Phil Solomon: A Retrospective

A peaceful and poignant meditation on violence, Natalia Almada’s haunting documentary chronicles the day-to-day life and transformation of the El Jardin Cemetery in the Mexican city of Culiacán. Dotting the cemetery’s barren landscape are extravagant newly constructed mausoleums that serve as the ﬁnal resting place for many of Mexico’s fallen drug lords. Almada elects not to focus on the dead, instead training her lens on the mourners and cemetery workers

From his awakening after the 1969 Stonewall riots to his death from AIDS at 44 in 1990, Vito Russo was one of New York’s most outspoken and inspiring gay rights activists. He played a pivotal role in the formative years of several organizations, including the GAA (Gay Activists Alliance), which staged subversive works of protest performance art; GLAAD (Gay &amp; Lesbian Alliance Against Defamation), which fought for accurate representations of gays and lesbians in the media; and ACT UP (the AIDS Coalition To Unleash Power), a guerilla activist group. He was also a proliﬁc writer who authored The Celluloid Closet, the seminal exploration and critique of gay and lesbian representation in ﬁlm. Director Jeffrey Schwarz, who served as an assistant editor to Rob Epstein and Jeffrey Freidman on their ﬁlm version of The Celluloid Closet, combines remarkable archival footage with testimonies from those who knew Russo best to craft a heartfelt and moving portrait of a man and the movements for which he fought. (TY)

Walt SEE: Nindy and Other Shorts from Wisconsin’s Own

Winner of the FIPRESCI Prize at the 2011 Venice International Film Festival, Ben Rivers’ debut feature is a mesmerizing portrait of a rural outsider that extends many of the concerns of his acclaimed avant-garde shorts. The ﬁlm follows a man named Jake, who was also featured in Rivers’ This Is My Land (2006). Jake lives in the forest, far from the demands of modern urban living. Rivers’ camera observes as he takes walks, builds rafts, and takes up little projects, surviving on his own and living his life as he chooses. Boasting stunning black-and-white cinematography, the ﬁlm attunes the viewer to Jake’s own sense of time; hours pass and the seasons change, but Jake stays true to a dream he had as a young man at sea: to live his life on his own terms. According to Rivers, the ﬁlm has “at its core the relationship between a person and the place they have chosen to live out their life, and the deep connection there is between them.” (JP)

who roam El Jardin (the title translates to the night watchman), telling an ultimately gruesome and tragic story without ever showing a drop of blood. Winner of numerous international festival awards and lauded for its cinematography, El Velador is “an unsettlingly quiet, even lyrical ﬁlm about a world made and unmade by violence” — A.O. Scott, The New York Times. (TY)