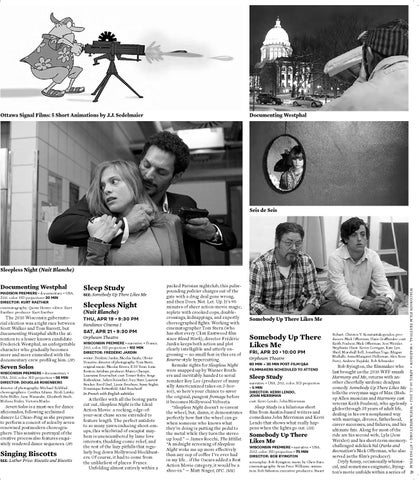 The 2010 Wisconsin gubernatorial election was a tight race between Scott Walker and Tom Barrett, but Documenting Westphal shifts the attention to a lesser known candidate: Frederick Westphal, an unforgettable character who gradually becomes more and more enmeshed with the documentary crew proﬁling him. (JP)

Sleep Study SEE: Somebody Up There Likes Me

A thriller with all the boring parts cut out, Sleepless Night is the Ideal Action Movie: a rocking, edge-ofyour-seat chase scene extended to feature length. The perfect antidote to so many yawn-inducing shoot-emups, this whirlwind of escapist mayhem is unencumbered by lame love interests, thudding comic relief, and the rest of the lazy pitfalls that regularly bog down Hollywood blockbusters. Of course, it had to come from the unlikeliest of places: France. Unfolding almost entirely within a

packed Parisian nightclub, this pulsepounding policier charges out of the gate with a drug deal gone wrong, and then Does. Not. Let. Up. It’s 90 minutes of sheer action-movie magic, replete with crooked cops, doublecrossings, kidnappings, and expertly choreographed ﬁghts. Working with cinematographer Tom Stern (who has shot every Clint Eastwood ﬁlm since Blood Work), director Frédéric Jardin keeps both action and plot clearly intelligible and utterly engrossing — no small feat in this era of Bourne-style hypercutting. Remake rights for Sleepless Night were snapped up by Warner Brothers and inevitably handed to serial remaker Roy Lee (producer of many silly Americanized takes on J-horror), so here’s your chance to savor the original, pungent fromage before it becomes Hollywood Velveeta. “Sleepless Night doesn’t re-invent the wheel, but, damn, it demonstrates perfectly how fast the wheel can go when someone who knows what they’re doing is putting the pedal to the metal while they turn the stereo up loud.” — James Rocchi, The Hitlist. “A midnight screening of Sleepless Night woke me up more effectively than any cup of coffee I’ve ever had in my life… if the Oscars added a Best Action Movie category, it would be a shoo-in.” — Matt Singer, IFC. (MK)

Somebody Up There Likes Me

Sleep Study is a hilarious short ﬁlm from Austin-based writers and comedians John Merriman and Kerri Lendo that shows what really happens when the lights go out. (JH)

Bob Byington, the ﬁlmmaker who last brought us the 2010 WFF smash Harmony and Me, returns with another cheerfully sardonic deadpan comedy. Somebody Up There Likes Me tells the everyman saga of Max (Bishop Allen musician and Harmony cast veteran Keith Poulson), who agelessly glides through 35 years of adult life, dealing in his own nonplussed way with marriage, divorce, fatherhood, career successes, and failures, and his ultimate fate. Along for most of the ride are his second wife, Lyla (Jess Weixler) and his short-term-memorychallenged sidekick Sal (Parks and Recreation’s Nick Offerman, who also served as the ﬁlm’s producer). Dryly funny, occasionally whimsical, and sometimes enigmatic, Byington’s movie unfolds within a series of 31